What causes the death of cancer patients? Tumor releases cytokines to destroy the blood-brain barrier and accelerate death.

Cancer has always been one of the biggest nightmares in the history of human diseases. It is also called the “king of all diseases” because of its complexity and incurable nature.

To this day, scientists are still unsure of the real cause of death of cancer patients.

The location of certain cancers is not so important, such as the skin, but some skin cancer patients also develop their diseases very quickly.

Of course, the current clinical explanation for this is that these cancer cells often metastasize to other organs, leading to multiple organ failure, and ultimately leading to rapid death of cancer patients. However, Professor David Bilder of the University of California at Berkeley believes that this is not the whole reason.

The study found that through the study of model animal fruit flies, tumors will release a cytokine-interleukin-6 (IL-6), which destroys the blood-brain barrier between blood flow and the brain, allowing two kinds of The environment is mixed, which can lead to many diseases including infection, trauma and even obesity, and accelerate the death of cancer patients. The same phenomenon has been confirmed in mice.

More importantly, the research team found that by blocking the effect of cytokines on the blood-brain barrier, the lifespan of fruit flies and mice with malignant tumors can be prolonged. These findings help guide the development of new cancer treatment strategies.

Many human cancers are metastatic, but this does not change a basic question-why does cancer cause death? If the tumor metastasized to the lungs, did the patient die of lung failure or other diseases? In fact, many cancer patients often die from symptoms far away from the tumor. The mechanism of these systemic physiological disturbances is called paraneoplastic syndrome.

As early as 2015, Professor David Bilder implanted non-metastatic tumors in fruit flies and looked for systemic effects caused by tumors, not just on the tumor-containing organs themselves. They found that tumors in fruit flies can release IL-6, which can inhibit the action of insulin and cause “cachexia,” a tissue loss phenomenon that kills one in five cancer patients. This research was also published in the Journal of Developmental Cell [2].

Now, in this new study, the research team has once again discovered that IL-6 released by tumors in fruit flies and mice can also destroy the blood-brain barrier between the blood and the brain, causing infection, trauma and Obesity and a series of diseases.

In the non-metastatic tumor model of Drosophila, the research team found that the cytokines produced by malignant tumors drive a wide range of hosts to activate JAK-STAT signals and lead to accelerated host death. STAT activity is particularly high in blood-brain barrier cells, where it induces abnormal blood-brain barrier permeability. 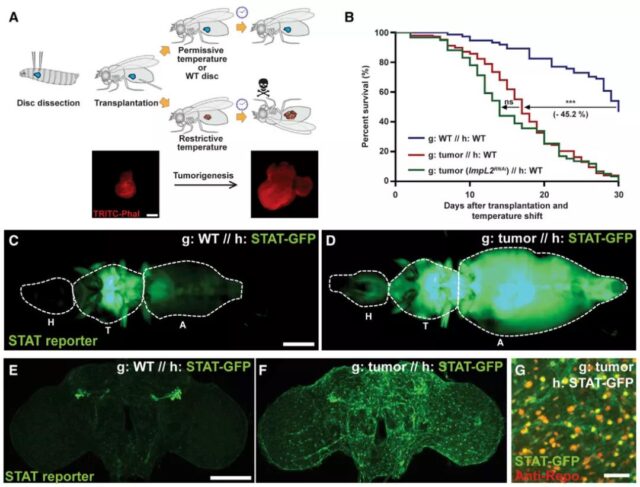 It is worth noting that inhibiting STAT in the blood-brain barrier not only restores the barrier function, but also prolongs the lifespan of the tumor host. The research team found that blocking IL-6 on the blood-brain barrier can extend the lifespan of cancer-bearing fruit flies by 45%. Consistent with this, 21 days after tumor inoculation, 75% of mice treated with IL-6 receptor blockers survived, while only 25% of untreated cancer mice survived.

Professor David Bilder said that IL-6 cytokines are known to cause inflammation. Our new discovery is that the inflammation caused by this tumor actually causes the blood-brain barrier to open. If you intervene in this open process, but do not care about the tumor, then under the same tumor burden, the host can live longer and healthier.

Drosophila tumors cause damage to the blood-brain barrier

Not only that, the research team found more carcinogenic chemicals in fruit flies, which are related to edema. Edema is caused by excessive fluid retention, and excessive blood clotting can cause venous obstruction, both of which are often accompanied by cancer. In addition, other researchers have found that chemicals produced by tumor-carrying fruit flies are related to anorexia and immune dysfunction, which are also symptoms of many cancers. 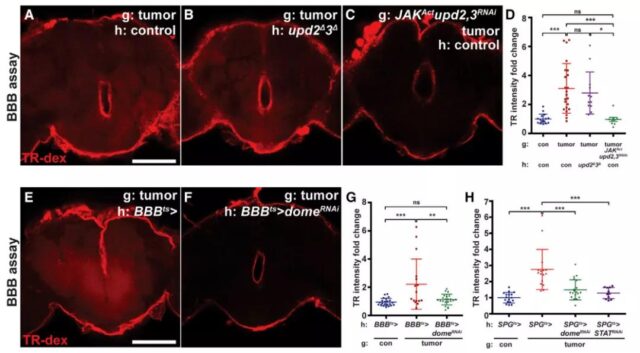 Professor David Bilder said that the reason why these studies can be completed so quickly is due to fruit flies. Drosophila cancer models have key advantages over other animal cancer models (such as mice and rats):

First, researchers can track fruit flies to the moment they die, in order to determine what caused the death. For vertebrates such as mice, for ethical considerations, researchers should not make them too painful, so they often have to euthanize them before they die naturally. This also makes it impossible for us to fully understand the cause of tumors in vertebrate tumor models. The ultimate cause of death.

Second, the number of samples in most rodent cancer studies is too small, usually only tens or even a dozen, but fruit fly experiments may involve hundreds or thousands of individuals, which greatly improves the statistical significance of the research results.

In addition, fruit flies reproduce fast and have a short natural life span, which facilitates scientists to conduct research faster.

Professor David Bilder said: “Although fruit flies are closely related to humans, this does not prevent them from playing a key role in understanding tumor growth factors and oncogenes. This latest study suggests that fruit flies may be the understanding of cancer. The key animal model for systemic effects!”