Around the world, about 1.6 million people die from lung cancer each year, and 85% of lung cancers have a common tissue phenotype, which is called non-small cell lung cancer (NSCLC).

The activating mutation of epidermal growth factor receptor (EGFR) is the most common driving factor of NSCLS, and it often occurs in the kinase domain (exons 18-21) of EGFR.

Although targeted therapies for common EGFR mutations and a small number of other mutations have been approved for marketing, there are still some EGFR mutants without effective treatment options, and the incidence of these mutations and drug sensitivity are still unclear.

The Heymach team at the Anderson Cancer Center of the University of Texas in the United States divided EGFR mutations into four different subgroups based on the structure-function relationship between EGFR mutations and drug sensitivity, which can predict the prognostic effect of patient inhibitor treatment. 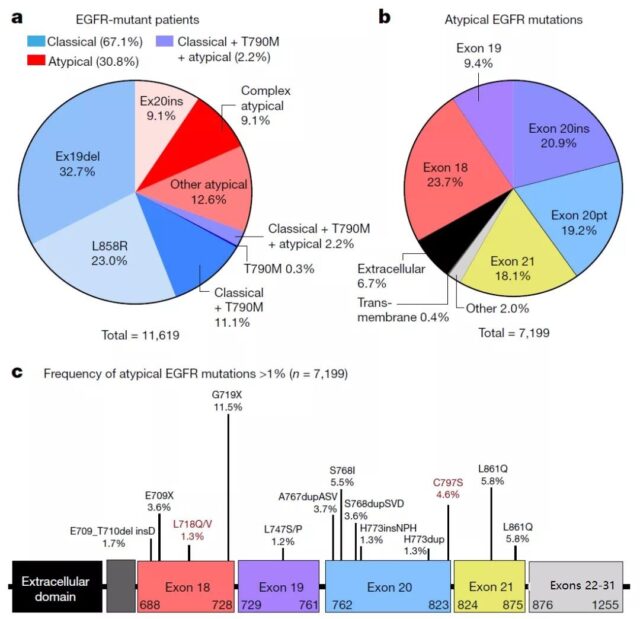 As shown in the figure above, they collected the mutation frequency data of 16,715 NSCLC patients with EGFR mutations in 5 databases, of which 11,619 patients had genotype data. Among these patients, 67.1% carried classic mutations (L858R and or Ex19del with or without T790M), and 30.8% carried atypical mutations.

This shows that clinically, patients with atypical mutations have poor prognosis because there is no effective treatment.

They next analyzed 76 cell lines expressing EGFR mutations in exons 18-21, and screened these cell lines using 18 EGFR inhibitors. After hierarchical clustering, the sensitivity of EGFR mutations to the corresponding inhibitors was obtained as shown above. Sex spectrum.

(A) classical-like mutations away from the ATP binding pocket;

(D) Mutations in the inner surface of the ATP binding pocket or the c-end of the αC-helix may cause the deformation of the αC-helix or the P-loop region (P-loop and αC -helix compressing, PACC). 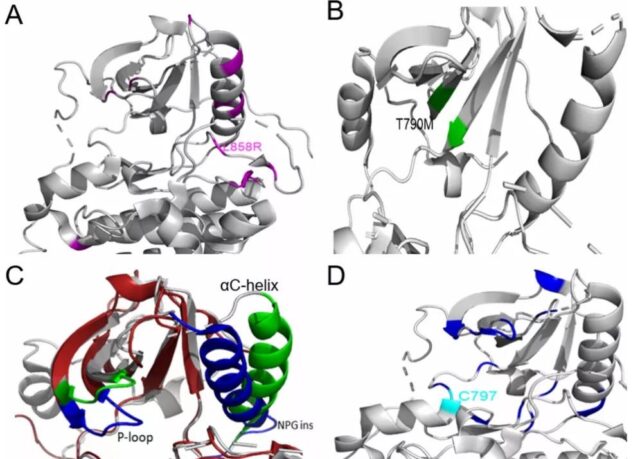 Choose importance in decision-making. The analysis results found that classification based on structure and function can predict the sensitivity of mutants to drugs more effectively than based on exons.

Next, the researchers verified the drug sensitivity of the four types of mutants in various aspects. 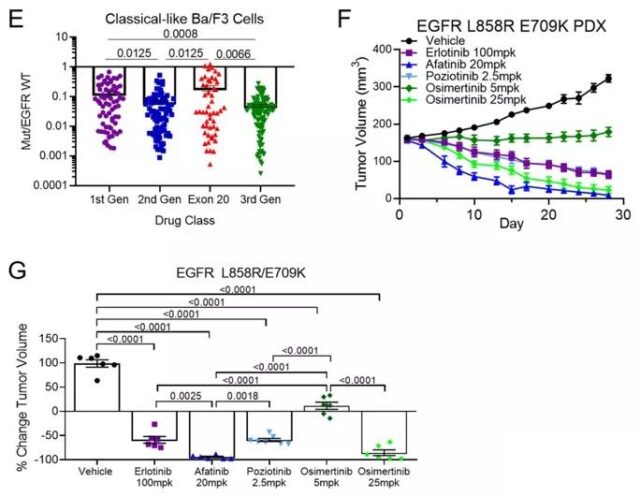 Compared with wild-type EGFR, classic and atypical EGFR mutations have little effect on the overall structure of EGFR. It is sensitive and selective to all kinds of EGFR-TKIs, especially the third-generation TKIs.

These data indicate that mutations within a single exon are highly heterogeneous, and exon-based classification is unlikely to provide the best guidance for clinical treatment decisions. 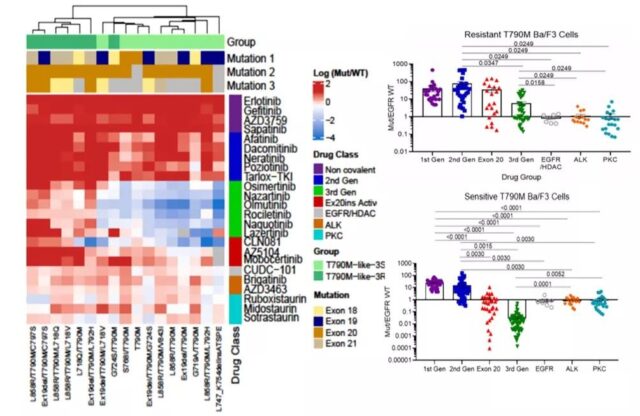 Previous reports have shown that protein kinase C (PKC) and anaplastic lymphoma kinase (ALK) inhibitors have off-target activity against EGFR mutations including T790M. The T790M-like-3S mutant has high selectivity for third-generation TKIs and some Ex20ins activity inhibitors, and moderate selectivity for ALK and PKC inhibitors.

T790M-like-3R mutant contains complex mutations of T790M And a known resistance mutation (ie C797S, L718X or L792H), resistant to EGFR TKIs, but reserved for some ALK and PKC inhibitors such as brigatinib or midostaurin sex.

Through larger-scale screening of PKC and ALK inhibitors, it is possible to develop new covalent inhibitors against T790M-like-3R mutants. 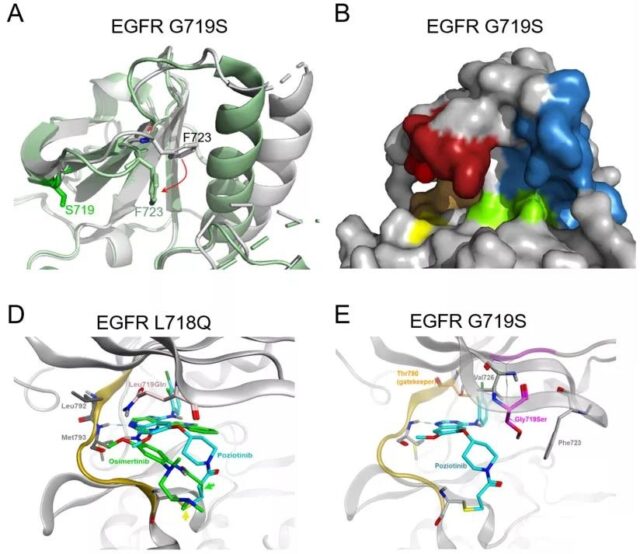 As shown in the figure above, the simulation of the interaction between osimertinib and PACC mutations G719S and L718Q found that the rotation of the P-loop changes the position of the TKI stable point, making the inert ring of osimertinib away from the P-loop , The combination is not stable.

In contrast, the second-generation TKIs (pozitinib) do not interact with the P-loop of EGFR, but act on the hydrophobic cleft of EGFR.

In in vivo experiments, the PDX model derived from patients with G719A mutant NSCLC is resistant to the third-generation TKI osimertinib, but is most sensitive to the second-generation TKI pozitinib.

The above data combined with the PACC mutant sensitivity map shows that the selectivity of the second-generation TKIs to PACC mutations is significantly higher than that of any other TKIs.

It is worth noting that a patient with a complex PACC mutation (E709K+G719S), the tumor shrank after treatment with the second-generation TKIs afatinib.

The simulation of the acquired PACC mutant showed that the hinge region of EGFR shifted, which made osimertinib bind to M793 unstablely, and the acrylamide group was far away from C797.

The changes in the hinge area did not affect the binding of the second-generation inhibitors.

PACC mutations were found in the biopsies at the advanced stage of drug resistance, and then they received second-generation TKI treatment, and the tumor entered the stable stage.

These data indicate that both primary and acquired PACC mutations are sensitive to second-generation TKIs. Grouping based on structure and function can identify a new type of PACC mutations.

The group based on structure and function found that the duration of treatment (DOT) of PACC mutation patients (n=156) was significantly longer than that of the subgroup (DOT: 17.1 months, P<0.0001). 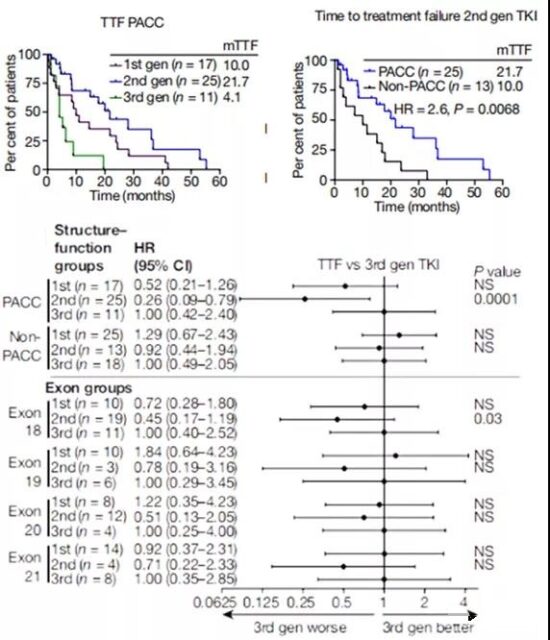 Therefore, the classification based on structure and function not only identifies a larger patient subgroup, but also this group is treated with second-generation TKIs with better clinical effects. 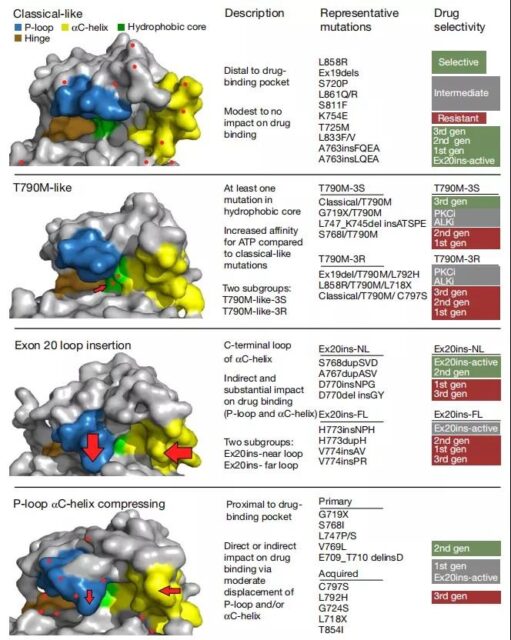 this study found that EGFR mutations including atypical mutations can be divided into four different subgroups according to function and structure, and groups based on structure and function and taxa based on exons are useful in predicting drug sensitivity and The phenotype of the disease is better.

This reflects that mutations in different gene regions may have similar effects on protein structure.

Finally, these findings support the idea that for cancers containing different mutations in oncogenes, the use of a structure-function-based approach may provide meaningful guidance for clinical trial design and drug development.