Why esophageal adenocarcinoma is showing a younger trend?

To a significant increase. Barrett’s esophagus, smoking, obesity, etc. are all risk factors for esophageal cancer, but patients under the age of 50 are more likely to be diagnosed at the incurable stage. Early detection, early diagnosis, and early treatment can help cure or prolong esophageal cancer. Lifespan of the patient. 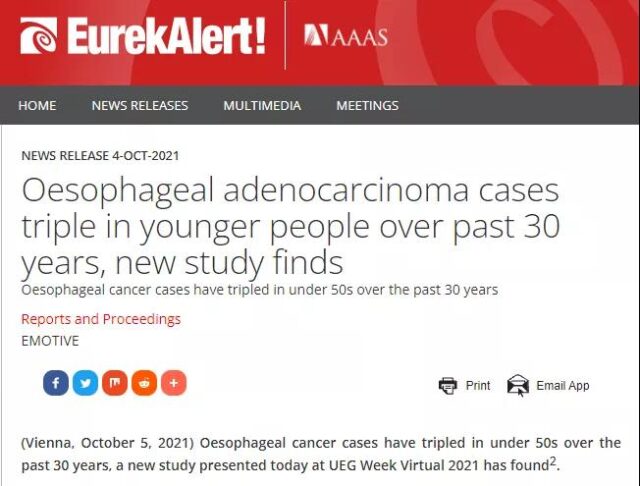 Experts believe that the increase in esophageal adenocarcinoma cases reflects changes in lifestyle-related disease risk factors, including an increase in unhealthy habits such as smoking, poor diet and reduced physical exercise.

Ali Al-Kaabi of Radboud University Medical Center in Nijmegen, the Netherlands, is the lead author of the study. He explained: “The incidence of esophageal adenocarcinoma in young people is increasing. We know that the disease is related to Barrett’s esophagus, which is a type of Precancerous lesions of the lower end of the esophagus. Gastroesophageal reflux (acid reflux), obesity and smoking are also important risk factors for esophageal adenocarcinoma. We also know that in the past 30 years, the proportion of these risk factors in young people has Increased.”

Ali Al-Kaabi commented: “The relative survival rate of the younger age group has increased significantly, and the survival gap is increasing compared with the elderly.” These differences may reflect the fact that younger patients are more likely to accept more positive attitudes. A variety of treatments, including postoperative radiotherapy and chemotherapy, can help cure or prolong the life of the patient.

Esophageal cancer has many symptoms, but it is often difficult to find and confused with other gastrointestinal symptoms. These symptoms include difficulty swallowing, illness, heartburn, and indigestion.

A study published in The Lancet showed that for cancers caused by external causes, lifestyle changes can reduce the risk of dozens of cancers. The study analyzed more than 200 previous studies and sorted out the relationship between exercise, sedentary, diet and many other lifestyles and the risk of cancer incidence and death. Data for 1.14 million participants showed that exercise can reduce the risk of esophageal cancer by 42%. In life, reducing sedentary factors will reduce the overall risk of cancer. Diet is closely related to the incidence and death of cancer. People are used to eating sauerkraut and pickled food. These foods contain nitrosamine compounds, which are recognized as strong carcinogens worldwide. Some people eat too fast. Eating hot food can easily stimulate the esophageal mucosa and cause cancer.

In addition to exercise and diet, it is also important to raise awareness of early screening. Ali Al-Kaabi further pointed out: “According to the results of these studies, it is very important for adults under the age of 50 to realize that these esophageal cancer symptoms are very important, which can help early diagnosis and improve survival. This is especially important in high-risk groups, including Those who smoke, are obese or drink heavily.”

2. Increasing incidence of esophageal cancer among adults under 50 in the Netherlands: a population-based group study. Shown at UEG Week 2021.

Why esophageal adenocarcinoma is showing a younger trend?