Cancer is the second most common cause of death in the world, which shows the urgent need for new treatments for solid tumors. Solid tumors, such as lung cancer, colon cancer, prostate cancer, and breast cancer, are the main cause of cancer mortality.

Adoptive immunotherapy is a promising treatment method, with chimeric antigen receptor (CAR) T cell therapy as the most prominent example.

This article summarized the key predictors of the efficacy of CAR T cells in lymphoma.

What do we know about lymphoma?

At first glance, hematological malignancies have a series of unique characteristics that make them favorable targets for immunotherapy:

(1) They are mainly located in common areas where lymphocytes persist, such as lymph nodes and bone marrow, and promote the transport of CAR T cells. ;

(3) physical obstacles, such as fibrotic stroma and immunosuppressive microenvironment, and solid tumors Compared to obviously not so prominent [58].

However, each of these characteristics is somewhat controversial and does not fully define the scope of CAR T cell therapy. For example, treatment of central nervous system (CNS) lymphoma [49] and skin recurrence [59] have been reported to be positive. This shows that successful immunotherapy does not require knowledge of the location of the tumor in the lymph nodes.

CD19 antigen seems to be a very attractive target for CAR-T therapy, mainly for the following reasons: (1) It is ubiquitously expressed on tumor cells; (2) Immunoglobulin replacement therapy can successfully overcome B cell loss Obvious damage to the patient’s adaptive immunity.

The clinical data of the ZUMA-1 trial supports these findings because the loss of CD19 was only confirmed in 11 relapsed patients [63]. Interestingly, in the initial diagnosis before any treatment, leukemia cells lacking the extracellular CD19 domain can be tracked, which means that some ALL and lymphomas are heterogeneous enough to resist CAR T cell therapy [65]. Therefore, despite the implicit presence of such clones in tumors, tumors do not always follow an escape strategy based on antigen loss.

The aforementioned ALL CD19 recurrence cases are related to the expression of the retained intracellular and truncated extracellular CD19 domains, but functional signal transduction can still be achieved.

However, there are other targets in hematology (Table 1), such as B cell maturation antigen (BCMA). CAR-T treatment leads to an objective response close to 100% and a high CR rate, but it has no cure [1,68].

A successful example includes anti-CD22 CAR T cell therapy (n=52), which leads to a high remission rate in ALL patients, but subsequent relapses of 64% [69]. Importantly, in this case, 57.5% of patients had previously received anti-CD19 CAR-T treatment, which partly explains the high recurrence rate.

Compared with CD19, the function of CD22 antigen in B cells is somewhat controversial, because the molecule has inhibitory and stimulating effects on B cell proliferation [70]. Compared with normal cells, the proliferation of CD22-deficient cells was slightly reduced under IgM stimulation, but increased under lipopolysaccharide stimulation [71]. Therefore, although the presence of CD22 is not strictly critical to the development and function of B cells, it still represents an example of a suitable target for CAR T cell therapy.

2. The immunosuppressive microenvironment is also important in lymphoma

Solid tumors are usually accompanied by an effective microenvironment that protects them from the immune system. Similarly, some lymphomas seem to be largely dependent on the tumor microenvironment (TME), which can recruit and regulate tumor-promoting non-malignant cells.

Among the most aggressive lymphoid tumors, only a few subtypes do not require a dense microenvironment to support their proliferation (eg, Burkitt’s lymphoma) [75]. Specific chemokine receptors and adhesion molecules enable lymphoma cells to “home” to certain body parts (for example, lymph nodes of CCR7 and CXCR4/CXCR5 [75]), which may be primary lymphoma The basis of disseminated clinical manifestations.

“Solid tumor-like” participants in the microenvironmental landscape, such as cytokines (IL4, IL6, IL10, and TGFβ) and cells (M2 macrophages, N2 neutrophils, MDSC, Tregs) are often found in lymphoma tissues[ 76,77]. Compared with solid tumors, we still know little about angiogenesis in lymphoma [75], but there are similarities with solid tumors, vascular endothelial growth factor (VEGF) is clearly a participant in this process [78].

However, similar to some trials in solid tumors [79], the combination of bevacizumab and R-CHOP (a chemotherapy regimen for the treatment of NHL) targeting the VEGF pathway in DLBCL did not significantly improve the results, but Increased toxicity [75]. Lymphoma cells express CD70, CD80, CD86 and PD-L1 immune checkpoints, which can down-regulate effector T cells including Th17 [80] and allow clinical approval for Hodge CI for gold lymphoma (HL) and primary mediastinal B-cell lymphoma [81, 82].

Cancer-associated fibroblasts (CAF) promote the tumorigenic characteristics of the microenvironment and are usually only studied in the context of bone marrow as part of multiple myeloma and hairy cell leukemia [83].

Although the composition of lymphoma extracellular matrix (ECM) is relatively well-known [78], in lymphoma TME, the abundant rigid ECM does not seem to be fully represented, especially when compared to tumors that are rich in stromal cells such as pancreatic cancer. [84]. It is known that the vascular system in lymphoma has the same thickness as the vascular system in normal lymphoid tissues, which indicates the lack of perivascular fibrosis that promotes lymphocyte transport [85].

A recent study found that the reduction of collagen-modifying enzymes in malignant lymphoid tissues means that the frequency of lymphoid stromal cells (eg, fibroblast reticular cells and follicular dendritic cells) in the tumor is lower [86]. As far as we know, the only type of lymphoma rich in rigid ECM is the nodular sclerosis subtype of HL, but its treatment sensitivity has not been significantly reduced [87].

3. Even in immunodeficiency mouse models, T cell composition is crucial

The FDA-approved anti-CD19 Yescarta® and Kymriah® are produced from the entire peripheral blood mononuclear cell (PBMC) population without the isolation of specific T cell subtypes [88,89].

Today, it is well known that the subtype composition of CAR T cell products is an important parameter that defines its key therapeutic characteristics (such as safety and effectiveness) [54,90,91,92,93,94].

This optimal subtype composition was determined from the first CAR-T clinical trial conducted in neuroblastoma.

The increase in the percentage of CD4+ T cells and CD45RO+CD62L+ central memory T cells (TCM) in the infusion product was used as a prolonged lasting There has been controversy since the predictor of sex [54].

Juno Therapeutics Inc. is currently developing JCAR014 and JCAR017 products, and its identified CD4+ and CD8+ TCM composition is 1:1 [92,93], which has proven to significantly reduce side effects [73,92].

Freetta and others used Kymriah® CAR T cells made clinically for patients with chronic lymphocytic leukemia (CLL) to treat NOD-SCID/γc−/− (NSG) mice transplanted with NALM-6 leukemia cells[96] . They found that the survival of mice largely depends on whether CAR-T is produced by responders or non-responders, and that the percentage of memory stem T cells (TSCM) in responders is significantly higher.

The authors identified potential predictors of successful CAR T cell therapy, such as the prevalence of CD27+CD45R–CD8+ T cells (associated with long-lived memory cells) and CD27+PD-1-CD8+ in pre-manufactured leukocyte removal products CAR T cells and the activation of memory-related genes involved in the IL6/STAT3 signaling pathway.

Importantly, even in some immunodeficient mice lacking TME, the inherent adaptability of CAR T cells was found to be a key factor in the therapeutic effect.

Rossi et al. evaluated the versatility of CAR T cells in a group of 22 NHL patients (a single cell secreted more than 2 cytokines), and revealed the ability of lymphocytes to secrete both inflammatory IL17A and the effector IFNγ [97] .

It is found that about 20-25% of all CAR T cells that produce cytokines are multifunctional and are associated with a higher rate of successful treatment.

In addition, it has also been found that IL17A-producing multifunctional CD4+ CAR T cells contribute to a positive therapeutic response, possibly by sharing Th17 cell characteristics and reprogramming TME.

The authors did not use routine flow cytometry to determine any difference between the CAR T cell phenotypes of responders and non-responders.

Some people believe that tumors rich in Th17 features have more favorable clinical outcomes [41], and Th17 cells are usually associated with improved cancer survival rates [98]. Interestingly, Neelapu et al. reported no statistical association between the CD4+:CD8+ subgroup ratio and the clinical efficacy or toxicity of Yescarta® [63]. It is important to note that these cells and the cells studied by Rossi et al. [97] are both CD3ζ/CD28 CAR-T, which indicates that for some CAR T cell products, the subtype composition may be less important.

4. Treg subgroups may be excessive in the peripheral blood of solid tumor patients and may affect the composition of CAR T cells

The proportion and absolute number of CD4+CD25+CD45RA-T cells (Treg) increased in 42 patients with endothelial cancer [99]. The median percentage of Tregs accounted for 12.5%, which increased to 33.5% in single-stage IV lung cancer cases. Patients have not received immunosuppressive therapy or chemotherapy for at least 3 months; therefore, the percentage seems to reflect their constant immune status.

In contrast, a recent study compared the proportion of suppressor cell subsets in lymphoma patients (n=43) and healthy donors [100]. Although some T cell populations (MDSC and NK regulatory cells) were elevated in patients, no significant differences in Treg populations between groups were observed. The cohort of the above study is similar (European, ~60 years old), but due to differences in application methods, direct comparison of results cannot be completely correct: (1) Calculate the percentage of Treg in PBMC[100] or total blood cells[99]; (2 ) Different definitions of Treg phenotype.

Some studies on lymphoma patients also found that compared with healthy volunteers, Treg levels did not change [101,102], while other studies reported that regardless of nationality, age, and disease state (new diagnosis and relapse), Treg levels were Several times the difference [102,103,104].

Cerapa et al. reported an increase in the total number of Tregs in patients with pancreatic cancer, which is entirely due to the expansion of the FOXP3+RORγt+ subgroup with inflammatory and immunosuppressive properties [110].

Currently, there is limited information on the assessment of Treg populations in CAR T cells. However, it is reasonable to predict that elevated Treg levels in patients with solid tumors may affect the final composition and expansion of CAR T cell products. In the literature [111], some strategies to overcome Treg proliferation in CAR-T products and in patients after infusion are reviewed.

Large-scale clinical trials studying patient cohorts with different hematological diseases (such as CLL, NHL, and ALL) can help to understand the efficacy of CAR T cell therapy and the role of various signaling pathways in this process.

For example, IL15 in serum is positively correlated with peripheral levels of CAR T cells [91,112], therapeutic effects [112], and severe neurotoxicity [91,112]. IL6 is associated with significant toxicity and clinical benefits of immunotherapy, so it seems reasonable to use antibodies or other means to preemptively eliminate this cytokine from the circulation [113].

However, some recent studies have reported the secretion of IL6 by CAR T cells [96,114] and the importance of the IL6/STAT3 signaling pathway for therapeutic effects [96].

Juno Therapeutics Inc. has demonstrated the correlation between peak CAR T cell serum levels and therapeutic efficacy and toxicity [90,113]. They developed a logistic regression model that might allow the selection of the best treatment window. Finally, lymphatic ablation, the chemotherapeutic elimination of the patient’s T cells in vivo, was found to be critical, because anti-CAR immune responses were observed when anti-CD19 CAR T cells were injected without prior lymphatic ablation [115,116,117]. In addition, the combination of lymphatic removal with cyclophosphamide and fludarabine resulted in better CAR T cell expansion [92,118], higher serum CAR-T peaks [119,120], but increased toxicity [90,119]. Recent data from the American Society of Clinical Oncology supports these observations [47,48,49,50,51], because lymphatic removal before infusion achieves a higher therapeutic effect. Figure 1 summarizes the factors that are important for the efficacy of CAR T cell therapy. 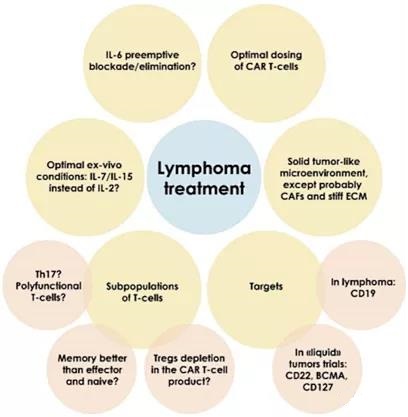 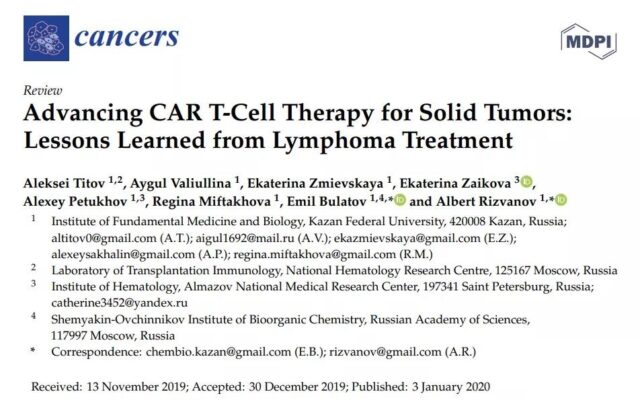