A snow leopard in a South Dakota zoo died Probably due to COVID-19.

A snow leopard in a U.S. zoo died after showing symptoms similar to the COVID-19. A tiger in the park has been diagnosed

The snow leopard suffered from loss of appetite and lethargy after coughing, and died on the 7th local time.

Great Plains Zoo in South Dakota announced on the 8th that a snow leopard in the park died after showing symptoms similar to those infected with the COVID-19 virus. 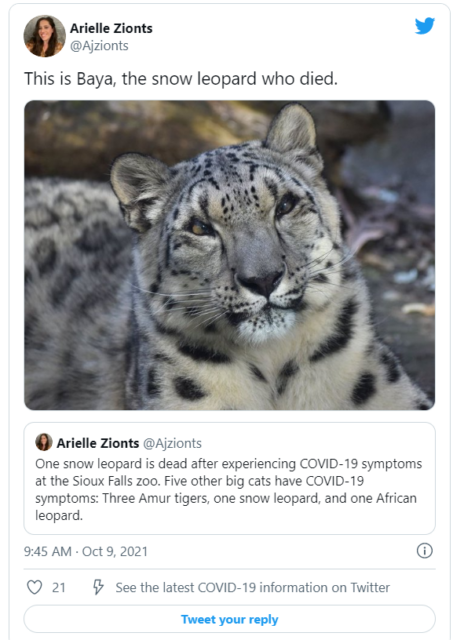 According to a Bloomberg report on the 8th, the Great Plains Zoo in South Dakota stated that the snow leopard was a two-and-a-half-year-old Baya. After experiencing cough symptoms, he developed loss of appetite and lethargy and died on the 7th local time. Currently, Baya is waiting for an autopsy.

The zoo said that just this week, another Siberian tiger in the park tested positive for the COVID-19 virus. In addition, other big cats also showed symptoms.

According to the report, zoo staff noticed that these big cats were sick because lions and tigers barely got up and had a bad appetite.

According to a Reuters report in Washington on September 17, the big cats at the Smithsonian National Zoo in the United States were all infected with the new coronavirus last week and are currently recovering.

The zoo’s chief veterinarian said on the 17th local time that the lion and tiger were probably infected with the COVID-19 virus from an asymptomatic zoo keeper, and this spread to all nine big cats.

According to the report, zoo staff noticed that these big cats were sick because lions and tigers barely got up and had a bad appetite.

Chief veterinarian Donald Nefer said: “This is a bit weird. Last Thursday we only had one animal and it was a little bit of a loss of appetite… But this situation does not require us to take immediate action.”

However, within 48 hours, other cats began to show signs of wilting, dry coughing and sneezing. Nefer said: “At this time, the situation began to become quite complicated, and we began to implement other biosecurity measures.”

According to the report, after testing these cats and subjecting them to different treatments for COVID-19 pneumonia, they are now recovering and should be able to recover soon.

Nefer said: “We see that the overall trend is positive. According to today’s performance, most of them eat more, are more active, have less runny nose and cough. I hope that by next Monday, their condition will be better. There are some major improvements.”