October 10th is World Mental Health Day. This was established under the initiative of the World Federation for Mental Health, and it is also strongly supported by the World Health Organization.

A study on global depression and anxiety in 2020 was published in The Lancet two days ago (see Resources). The special feature of this study is to specifically explore the impact of the COVID-19 epidemic on the incidence of depression and anxiety in 2020, that is, according to the epidemic situation around the world, analyze whether the epidemic has caused more mental illnesses.

Some people may sneer at such research-after all, this seems to be an obvious problem. Overwhelming epidemic reports, repeated peaks of infection, various travel restrictions, and more mental illnesses are normal. But for mental health problems, it is precisely this kind of “obvious” prejudice that affects our face up to this type of problem and our judgment of its seriousness.

According to the research in this paper in The Lancet, due to the epidemic in 2020, only two types of mental illnesses, depression and anxiety, will further increase significantly under the already alarming incidence.

First, researchers found that in 2020, the increase in the number of new coronavirus infections and the decrease in human mobility are highly correlated with the increase in depression and anxiety.

In other words, when the number of COVID-19 infections in a place soars and people have to stay at home, the incidence of depression or anxiety in this place also increases. And this correlation is global, no matter whether it is a developed or a developing country, there are no exceptions.

Furthermore, it should be noted that these effects are uneven. For both sexes, women are more affected. More than 31 million of the increased depression are women, and more than 51 million of the anxiety disorders are women. In terms of age, young people are more affected (Figure 1). But the saying that having money is hard to buy is happy, because the incidence of mental illness in high-income areas, both in terms of base and increase, is the same as the global average. 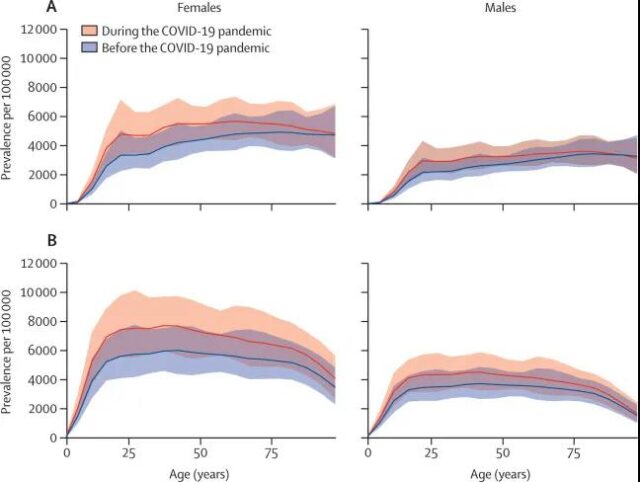 Figure 1: Comparison of the incidence of depression (A) and anxiety (B) before and after the epidemic. Pink is during the epidemic, and blue is before the epidemic. The unit is the number of cases per 100,000 people.

On a global scale, if it is a relative value, the increase rate of different regions is also quite different. In some parts of Central and South America and Central Asia, the increase in mental illness caused by the epidemic has even exceeded 38%.

Many regions in Europe and America are also between 30-35%. Relatively speaking, in East Asia and Oceania where the epidemic is well controlled, the increase in mental illness is even lower (Figure 2).

However, in many places, it is more than 10%, corresponding to nearly 200 cases of depression and more than 460 cases of anxiety per 100,000 people. Considering the huge population in this area, there are actually many people affected.

Figure 2: The global increase in depression caused by the epidemic, the deeper the red, the higher the increase, and the anxiety is similar.

Finally, not only is the increase in mental illness caused by the epidemic, we must note that even before the outbreak of the COVID-19, the base of mental illness was already very large. Regardless of the COVID-19, researchers estimate that the global incidence of depression in 2020 is 2,470 per 100,000 people, corresponding to 193 million people.

Under the influence of the epidemic, the estimated number of depression patients is 246 million. The base number of anxiety disorders is 298 million, and it is estimated to be 374 million after the epidemic. The global population is still less than 8 billion.

It can be said that even if there is no epidemic, the problem of mental health is already a crisis that any country and any society must seriously examine. Under the epidemic situation, this crisis has further increased in both its severity and criticality.

For the Chinese society, which is deeply influenced by the traditional culture of East Asia, it may be more urgent to recognize the universality of mental health problems and discuss this topic in a more rational and friendly way.

But seeing this kind of “low”, we can’t help but worry about whether we have underestimated because of our prejudice and taboo against mental health problems. Of course, even if the data is correct, nearly 2% of the incidence of depression and 4% of the incidence of anxiety also means that mental health problems still plague many people in society.

I recently saw a domestic TV series, which rarely talked about depression in a more realistic and unbiased way. But it is a great pity that in such a TV involving mental illness, suicide and other plots, it did not remind the audience to seek help when encountering difficulties. It can only be said that we still have a lot of lessons to make up for our cognition of mental health.