Japan “Anti-Vaccine Litigation” begins and Hundreds of demonstrators without masks crowded inside and outside the court.

Japan “Anti-Vaccine Litigation” begins and Hundreds of demonstrators without masks crowded inside and outside the court.

[Global Network] The Japanese anti-vaccine group filed a civil lawsuit in the court to request the Japanese government to cancel the COVID-19 vaccine license.

The first debate was held in the Tokyo District Court on the 12th. According to a Japanese media “J-CAST” reported on the 12th, before and after the court session, hundreds of supporters of the plaintiff without masks flocked to the court and crowded inside and outside the court.

Court staff were tired of epidemic prevention and the scene was very chaotic. According to the report, some people believe that “this may lead to collective infection” and “very disturbing.”

According to the plaintiff’s lawyer’s unilateral remarks on Twitter, he was expelled from the court by the presiding judge that day.

According to the report, on the 12th, supporters of the plaintiff gathered at the Tokyo District Court held a protest. Someone shouted “resolutely against the vaccine pass” through a microphone, which was echoed by other protesters.

In addition, a large number of people who did not wear masks poured into the lobby on the first floor of the Tokyo Court and the court on the seventh floor where the case was tried. The court staff were exhausted from the epidemic prevention and were so busy that the scene was very chaotic. 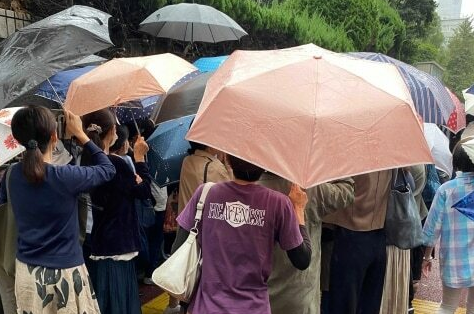 According to reports, the chief plaintiff’s lawyer Kibara Koshitoya posted on social media on the 11th that on the 12th, there was a staff member holding a sign at the entrance of the district court and encouraged supporters to gather at the Tokyo District Court. In addition, there were also group supporters. 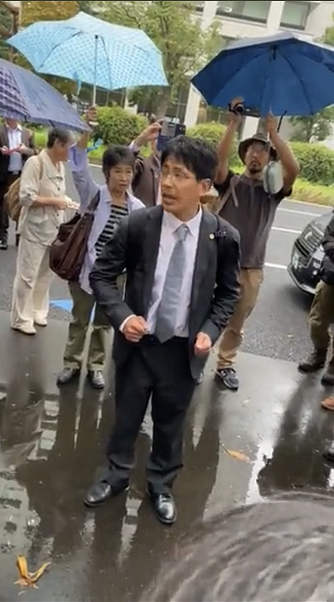 Kihara Koshitoya spoke to supporters after being expelled from the court (Image source: social media)

In addition, according to Kihara Koshihito’s Twitter account on the 12th, he claimed that “when he stated his opinion in the court, he was expelled from the court by the presiding judge with an’illegal’ exit order.”

According to reports, in response to this matter, many voices appeared on the Japanese Internet, believing that “this may lead to collective infection” and “very disturbing”, while surrounding the claims of the plaintiff and the plaintiff’s supporters, many netizens wrote, “If If you don’t want to get a vaccine, just don’t do it yourself.” Don’t trouble others.

It is worth noting that Kihara Kohitoya held a press conference on the 8th and announced that he would run for the House of Representatives election without a political party.