Long-term exercise can create a cancer-suppressing environment in the body.

As we all know, physical exercise can prevent various diseases, large and small, even including cancer treatment.

Recently, in a new study published in “eLife”, an international research team led by Karolinska Institute in Sweden showed that exercise can indeed increase the activity of the immune system and make anti-tumor cells more effective, thereby improving the effect of cancer treatment.

In recent years, the application of sports medicine in cancer treatment has developed rapidly in the field of clinical oncology. More and more clinical studies are adding exercise, like drugs, to standard cancer treatments, and show that there is an inverse relationship between exercise and disease progression and the specific mortality of cancer patients, including those with prostate cancer.

Recently, in a study published in “Medicine & Science In Sports & Exercise”, researchers from Edith Cowan University and the Dana-Farber Cancer Institute investigated the potential benefits of exercise for prostate cancer patients, including exercise Potential direct inhibitory effect on cancer cells. Studies have shown that exercise not only improves overall health, but also releases a “secret weapon” that slows the growth of cancer cells.

Previous studies have proposed some mechanisms for exercise to suppress tumors, but little attention has been paid to the myokine secreted by skeletal muscles that are recruited in large quantities during exercise.

Researchers found that muscle cell factor has the ability to inhibit tumor growth.

The 12-week exercise intervention is designed to allow patients to accumulate 300 minutes of exercise per week, including 5 to 9 resistance training sessions for the main muscle groups of the upper and lower body, with 1 to 4 groups each time, repeating 6 to 12 times at maximum intensity.

Each exercise lasts about 1 hour, and 5-10 minutes of aerobic warm-up and relaxation. To support muscle protein synthesis, patients need to take 40 grams of whey protein supplements immediately after each clinical exercise.

In addition, they also tested the effect of serum after 12 weeks of training on prostate cancer cell lines. Researchers have found that blood after exercise has a significant inhibitory effect on the growth of these cancer cells. 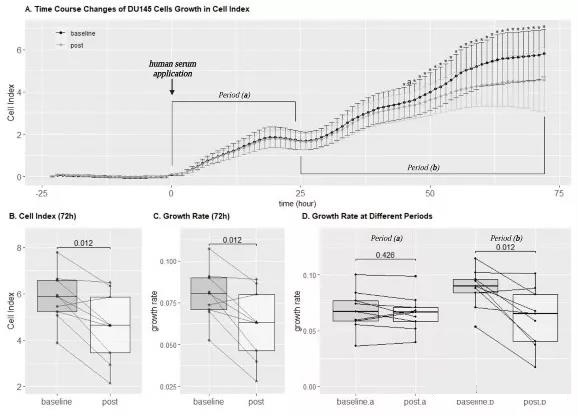 The researchers said that although the direct relationship between muscle cytokines and the growth of prostate cancer cell lines cannot be explained, the intervention serum extracted from patients in the resting state significantly reduced the growth of cancer cells.

The corresponding author of the study, Professor Robert Newton of the Institute of Sports Medicine at Edith Cowan University, pointed out that muscle cytokines may be the secret weapon to delay or prevent the growth of cancer. Although they cannot really kill tumors, they are actually sending signals to immune cells, T cells, to enter a fighting state and kill cancer cells.

Newton added: “Our research shows that long-term exercise can create a cancer-inhibiting environment in the body.”

Although the researchers only studied prostate cancer patients, they said that the release of muscle cytokines into the blood should be effective for all forms of cancer.

The team is currently conducting further research, including a trial involving a six-month exercise program for patients with advanced prostate cancer.

Newton concluded: “These men have a heavy burden of disease and suffer from a wide range of side effects from treatment, but their bodies can still produce anti-cancer’drugs’. This is important because our research shows that even those with advanced cancer Men, if they insist on physical activity, they will not be knocked down by disease so quickly.”