Are you still worried that Pfizer COVID-19 has little antibodies left after 6 months of vaccination?

Are you still worried that Pfizer vaccine has little antibodies left after 6 months of vaccination, but its protective effect against serious diseases still exists!

As well as observing the effectiveness of the BNT162b2 vaccine against any serious or fatal cases of new coronavirus, the report said that in the first two months after the second injection, its peak was about 96%, and then remained effective at this level for six months.

On October 11th, based on these two articles, researchers once again put forward the view that “antibody levels decreased after the second injection of Pfizer, but the protective effect against serious diseases still exists” in “The BMJ”.

A study found that six months after the second dose of Pfizer-BioNTech’s COVID-19 vaccine, the concentration of antibodies in healthcare workers dropped significantly, especially among men, people 65 years of age or older, and immunosuppressed people.

On October 11, researchers published an article titled “Covid-19: Antibody levels fall after second Pfizer dose, but protection against severe disease remains, studies indicate” on “The BMJ”. According to two articles published in the “New England Journal of Medicine“, it was discussed that “antibody levels dropped after the second injection of Pfizer, but the protective effect against serious diseases still exists.”

Israeli researchers conducted a six-month longitudinal prospective study, testing about 4,000 vaccinated medical staff for antibodies every month. At 6 months, the mixed model analysis showed that compared with participants aged 18-45, the IgG antibody and neutralizing antibody concentrations of participants 65 years of age or older were reduced by 38% and 42%, respectively. Compared with women in the same age group, men 65 years of age or older also experienced a decrease of 37% (IgG) and 46% (neutralization). 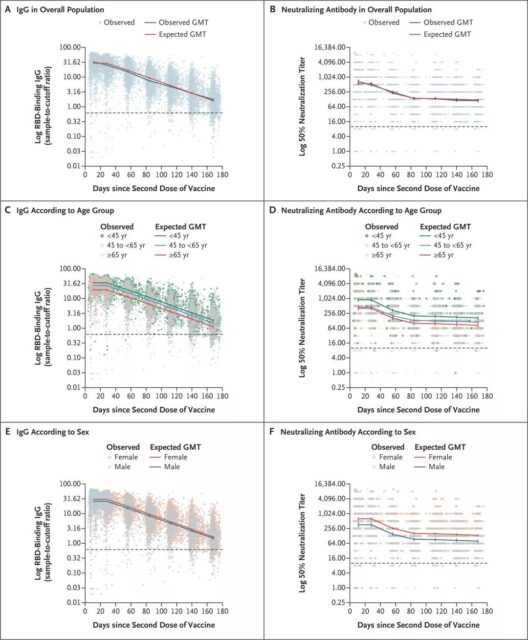 The study published in “New England Journal of Medicine” reported that compared with participants who were not immunosuppressed, the antibody concentration of immunosuppressed participants was reduced by 65% ​​(IgG) and 70% (neutralization). , And participants with a BMI of 30 or above had a 31% higher concentration of neutralizing antibodies, compared with those with a BMI of less than 30. Researchers published an article titled “Waning Immune Humoral Response to BNT162b2 Covid-19 Vaccine over 6 Months”.

They pointed out that compared with other vaccines (such as measles, mumps and rubella vaccines), the decrease in antibody concentration after Pfizer’s COVID-19 vaccine is more significant and rapid.

The limitations of this study include that it only involves most healthy healthcare workers, so it may not be representative of the wider population. In addition, it did not study cases of the new coronavirus, only the level of antibodies.

Another study was also published in “New England Journal of Medicine”. Researchers published an article titled “Waning of BNT162b2 Vaccine Protection against SARS-CoV-2 Infection in Qatar”. Effectiveness of SARS-CoV-2 infection and disease. 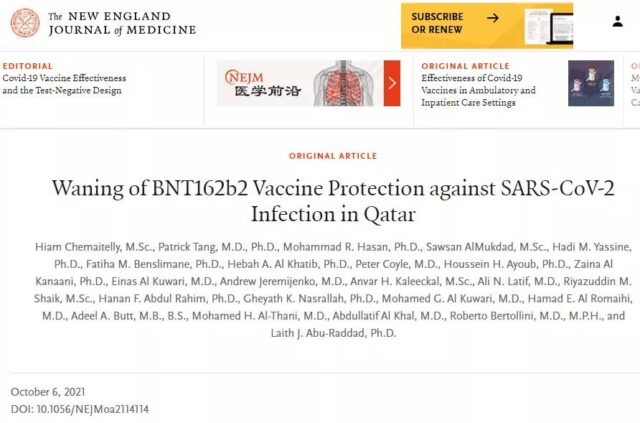 These researchers found that the effectiveness reached 78% in the first month after the second injection, then gradually decreased, and the rate of decline accelerated after the fourth month, reaching 20% ​​in the fifth to seventh months.

However, the researchers observed the effectiveness against any serious or fatal cases of the new coronavirus. They reported that in the first two months after the second injection, the peak was about 96%, and then it remained at the same level for six months. This level.

To carry out this study, the researchers matched people with positive PCR results with those with negative PCR based on gender, 10-year-old age group, nationality, the reason for PCR testing, and the calendar week of PCR testing.

The paper acknowledges some limitations, including the lack of personal data about pre-existing diseases, only a small part of the study population may have severe coexisting diseases, and only 9% of the population are over 50 years old. Therefore, this finding cannot be generalized to other countries where the elderly constitute a large proportion of the total population.