Epithelial-mesenchymal transition (EMT) is a biological process in which cells lose their epithelial characteristics and transform into cells with a mesenchymal phenotype. In colorectal cancer (CRC), EMT plays an important role in tumor progression, metastasis, and drug resistance.

Many preclinical and early clinical studies have shown that EMT markers may become prognostic predictors and potential therapeutic targets for CRC.

CRC is the third most common malignant tumor in the world. Despite the great progress in screening, early diagnosis and treatment, the progress of targeted therapy has been slow.

EMT was first described in embryonic development and refers to the cell reprogramming process in which epithelial cells acquire a mesenchymal phenotype, which plays a role in development, wound healing, and progression of malignant diseases.

Through EMT, tumor cells undergo a series of physical changes, including dissolution of tight junctions, polarity destruction, cytoskeleton reorganization, etc., which enable cells to gain stronger proliferation and invasion capabilities, and are easier to survive in the circulation process and form metastases in distant organs. .

In addition, studies have shown that EMT is associated with resistance to chemotherapy and immunotherapy. 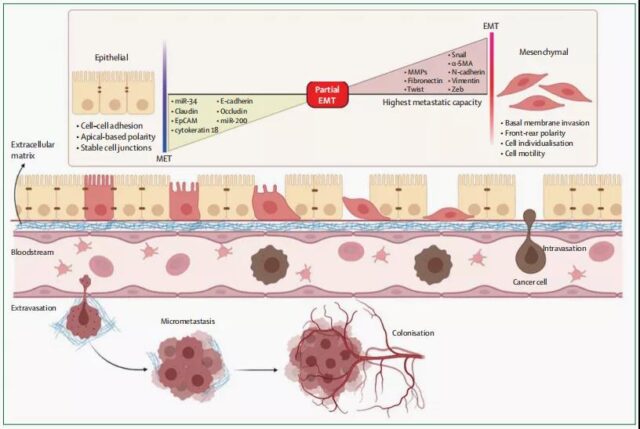 Epithelial cells dissolve cell-cell connections and destroy the integrity of basement membrane to enhance movement and migration capabilities are typical features of EMT.

Morphologically, these transformations result in the loss of the typical polygonal cobblestone appearance of epithelial cells, and the appearance of spindle-shaped fibroblasts, expressing mesenchymal cell markers (such as N-cadherin, vimentin, and fibronectin) and cell-related matrix metals Protease activity.

Many microRNAs and non-coding RNAs participate in the regulation or are regulated by key EMT genes, and affect the EMT process. Among them, microRNA-200 (miR-200) and miR-34 are the most studied.

Many studies have shown that EMT is related to the acquisition of stem cell-like characteristics, characterized by the expression of classic surface markers.

The CRC stem cell marker CD51 is often expressed in EMT. CD44 and SOX2 can be enriched around CRC cells treated with TGFβ1.

The acquisition of these characteristics will lead to drug resistance, up-regulation of immune checkpoint protein expression and so on.

Previous studies have shown that the activation of EMT in cancer cells can reduce their response to immunotherapy. This is because the release of TGF-β1 increases the number of immunosuppressive regulatory T cells and inhibits CD8+ cytotoxic T cells and natural killer cells. EMT increases the expression of PD-L1 in tumor cells and weakens the function of effector toxic T cells.

Conversely, microRNAs that inhibit EMT can regulate the expression of metabolite transporters and metabolic enzymes, thereby inhibiting glycolysis and fatty acid oxidation. And these disorders of metabolic function will affect EMT. 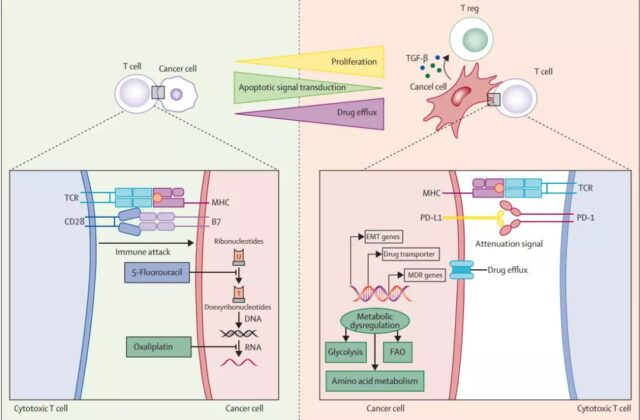 The activation of EMT transcription factors at the gene level ultimately leads to two results:

2. Obtain mesenchymal protein products such as N-cadherin, vimentin and fibronectin to drive cell movement and infiltration. 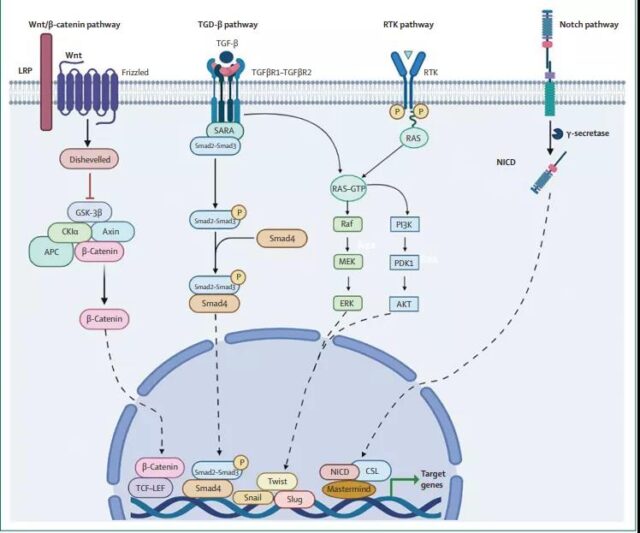 According to the point of action of the drug, targeted drugs are divided into three categories:

The treatment strategy for TGF-β is currently in experimental testing or early clinical trials. Regorafenib is an oral multi-kinase inhibitor that is currently approved for the late-line treatment of advanced CRC. Studies have shown that regorafenib can activate SHP-1 from the protein tyrosine kinase family, thereby reducing the local infiltration and metastasis induced by EMT in CRC.

Another multi-kinase inhibitor, Cabozantinib, can inhibit VEGFR2, MET, FLT3, c-Kit and AXL. Knockout of AXL in CRC cells can down-regulate transcription factors (including Slug, Twist and Zeb1) required for EMT, thereby reducing cell migration and infiltration, and increasing the expression of E-cadherin.

A clinical study (NCT02008383) showed that cabozantinib combined with panitumumab was used in KRAS wild-type CRC patients, and the objective response rate reached 16%.

Loss of E-cadherin is a core feature of EMT, and restoration of its expression is expected to inhibit metastasis. The expression of E-cadherin in CRC cell line treated with methotrexate was 10 times that of the initial level.

Although single-agent methotrexate is not an effective drug for advanced CRC in clinical practice, this data suggests a clinical treatment idea of ​​maintaining treatment after low-dose oral methotrexate as a routine adjuvant therapy to prevent further metastasis.

In addition to directly targeting EMT, there are some drugs that indirectly affect the state of EMT. For example, some metabolic drugs have the properties of inhibiting EMT. Further studies can be conducted based on the safety and efficacy of the drugs.

(Will EMT become the new target for the treatment of colorectal cancer?)

In short, EMT is a complex process involving multiple signal pathways regulated by multiple factors. These factors can interact with each other.

Although previous studies have suggested that the factors driving EMT can be used as prognostic factors or drug development targets, preclinical and early clinical data show that this is quite challenging.

There are many signal pathways involved in EMT and interact with each other and bypass effects. It is difficult to judge who is the best target of drugs.

In addition, there are differences between animal models and clinical practice. Most EMT studies on invasion, metastasis, and drug resistance are confirmed in mouse models, but it is difficult to simulate tumor heterogeneity, dynamic changes or reversibility of EMT. The research of EMT requires the collaboration of metabolism, proteomics, and genomics.