Johnson & Johnson Vaccine: The shortest interval and the widest population, but should it be used for Booster Shot?

When discussing mRNA booster shot, many people have a question: Is it an mRNA vaccine that needs to be enhanced? The effectiveness of mRNA vaccines has always been the highest among several types of COVID-19 vaccines. Why are these effective ones enhanced? In other words, if mRNA vaccines have to be booster, are other vaccines more needed?

For the United States, the other vaccines here are one-shot Johnson & Johnson. Whether it is from a mentality or a scientific point of view, whether Johnson & Johnson needs another injection is a very prominent issue.

In terms of the mentality of the vaccinators, if someone else has received two shots, they will have to get the third shot, and those who get one shot must be worried about what they are doing. From a scientific point of view, whether it is in clinical trials or tracking in reality, Johnson & Johnson has always been less effective than the two mRNA vaccines. It is still a very effective vaccine, but there is a question of whether it can be further improved.

The FDA’s opinions on reviewing the materials are relatively more in favor of Johnson & Johnson’s second shot. Although it points out that some data are inadequate, they basically agree that there is a need to strengthen the needle.

These immunological data all show that more antibodies are produced after the second injection. Among them, there are more increases in the interval of 6 months, but there are too few people in that group.

The most convincing thing is that it has conducted a two-shot Phase III clinical trial. This is two shots of Johnson & Johnson vaccine two months apart. The trial is about 16,000 people, half of which received two shots and half of the placebo group. . There are not many cases in this trial, so the confidence interval of the validity is very large.

However, if compared with the effectiveness of the Phase III clinical trial of a needle, it is indeed improved whether it is to prevent symptoms or prevent severe illness.

It should be noted that the symptoms in the Johnson & Johnson test are mainly moderate or above, so it cannot be compared with the clinical test results of the mRNA vaccine.

Judging from these data, the two injections of Johnson & Johnson should indeed improve the protection of vaccinators. Therefore, in terms of necessity and sufficient evidence, Johnson & Johnson’s second needle is relatively complete.

According to the AstraZeneca vaccine recorded in the United Kingdom, the incidence of this type of TTS thrombosis in the second shot has dropped significantly. But it certainly needs to be tracked after the listing.

Another question is, is it a better choice to receive a second shot of Johnson & Johnson vaccine? Is it better to mix mRNA vaccines? For example, the United Kingdom simply chose Pfizer as the first choice for booster shot.

Regarding whether it is better to use mRNA vaccines as a booster for Johnson & Johnson. NIH has been doing an booster shot test of mixed vaccines and uploaded a pre-printed article on October 14. It is still a relatively preliminary study, only tracking antibody data one month after the third injection.

However, this study systematically included 9 combinations of booster shots between the three vaccines in the United States, with 50 people in each group.

The most preliminary but also the most critical question of mixed-vaccination. This study published by NIH can be regarded as an answer: Pfizer, Moderna and Johnson & Johnson, regardless of the initial vaccination, any one of the booster shots can increase antibodies.

This answer is expected, after all, the basic function of acupuncture is to awaken immune memory. In fact, if a person who has been vaccinated becomes infected, immune memory will be activated. Viruses that are completely different from vaccines can awaken “memory”, so changing the vaccine shouldn’t be a problem.

But this is still the most critical issue, because if you want to perform mixed play enhancement shots, you must first make it clear that mixed play can be enhanced.

It should also be noted that the neutralizing antibody titer is 31 two weeks after the two doses of Johnson & Johnson vaccination.

According to a modeling of the previous Phase III clinical trial of Moderna, the effectiveness corresponding to a neutralizing antibody titer of 100 is 90% (within three months). Although different vaccines may not be able to use the same model to predict, but the difference is too far, obviously requires vigilance. 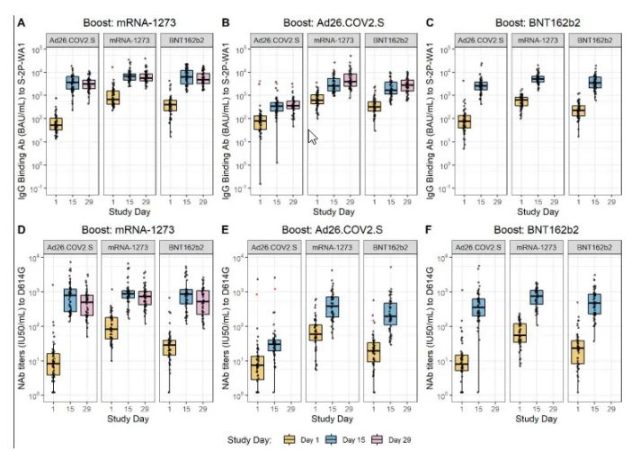 From the view of the antibody amplitude after the booster injection, the two mRNA vaccines Pfizer is similar to Moderna. Perhaps it can be counted as this interchangeable evidence.

But the number of people in this study is very small, with only 50 people in each group. The booster needle used by Moderna is still a full dose of 100 micrograms, not the half dose it applied for. The tracking is only for one month, and the Pfizer booster shot group even only tracks the antibody data for half a month.

There is no way to know how long these increased antibodies can last. The interval between the enhancement injections is not the same in each group, so it is not possible to directly compare the advantages and disadvantages.

Therefore, it is still a bit difficult to guide practice now. The mashup question is not used as a voting question in the expert meeting, but as a discussion question, which is to take these data out for discussion, see what everyone thinks of the evidence, and then ask the need. What further data.

However, the issue of using mixed beats to do Johnson & Johnson booster shots will definitely be raised in the future. (The New York Times stated that the FDA intends to allow mashups, but there is no definitive information on how to allow it and whether it is better to recommend non-mashing.)

Johnson & Johnson certainly does not want its vaccines to be enhanced by other vaccines. So it also emphasizes some of the particularities of its own vaccine, that is, the effectiveness of the vaccine is long.

One of the studies was just published in the New England Journal of Medicine on the morning of October 15 and compared the dynamics of antibody and cellular immunity between two mRNA vaccines and Johnson & Johnson vaccine vaccinators.

It was found that the mRNA vaccine had a higher peak antibody during 2-4 weeks. , But it dropped quickly afterwards, and by 6-8 months it was about the same as Johnson & Johnson or even slightly lower, and Johnson & Johnson’s antibody remained relatively stable, and even increased over time.

This durability is indeed consistent with the antibody changes it has observed in clinical trials and the data seen in effectiveness tracking.

Even in the NIH mixed-beating trial, Moderna was used as a booster, and the antibody at four weeks was lower than that of two weeks, while Johnson’s boosted needle seemed to be higher than two weeks for four weeks. However, studies on the durability of these vaccines are still lacking. In order to clarify the protection time of vaccines in the future, further research is definitely needed.