Too mysterious! Japan sudden success in fighting the COVID-19… the locals are puzzled

Too mysterious: Japan sudden success in fighting the COVID-19… the locals are puzzled

7. During the Tokyo Olympics in Japan in August, the number of confirmed diagnoses in a single day across the country soared three times. According to the Worldometer website, the real-time statistics of the world, the epidemic in Japan reached its peak in late August.

On August 22, there was an increase of 26,121 in a single day. A new record of a confirmed diagnosis. However, after that, the epidemic seems to have stabilized, and the number of daily diagnoses continued to decline. 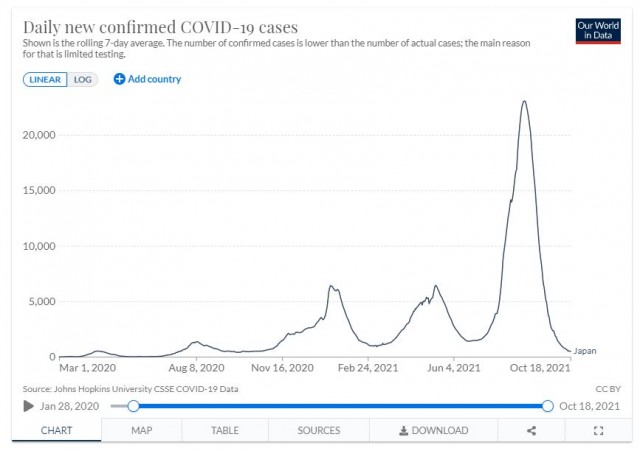 The Associated Press pointed out that Japan almost “overnight” became an “surprising and even a bit mysterious success story against the COVID-19.” Even Japan was “confused” about the “sudden” success in fighting the epidemic. After all, this country has never No strict lockdown measures like other countries have been implemented.

So what is the reason for the sudden slowdown of the epidemic in Japan? British “The Guardian” (The Guardian) quoted experts as pointing out that there is definitely not a single reason.

The first possible reason is the high vaccination rate in Japan. Although Japan suffers from insufficient vaccine arrivals, and the speed of expanding vaccination is later than in other countries, Toho University virology professor Kazuhiro Tachita pointed out that during the Delta mutant pandemic from July to September, the vaccination rate increased rapidly.

Japan has already Nearly 70% of the population is fully vaccinated. Hiroshi Nishiura, professor of infectious disease epidemiology at Hokkaido University, estimates that the vaccine has saved 650,000 Japanese from the epidemic and saved 7,200 lives.

The third reason may be that the Japanese reduced their travel during the third emergency declaration.

A report analyzing GPS pointed out that during the third emergency declaration period, the frequency of entering and exiting urban customs and places in urban areas decreased.

The third emergency declaration was concluded on September 30.

However, Kenji Shibuya, the former director of the Institute for Population Health at King’s College London, does not believe that the influence of public activities is so large. He believes that it is mainly caused by “seasonal factors.” In addition to vaccines, it may also include “viral properties that we still don’t know.”

In response to the sudden slowdown of the epidemic, Japanese public health experts hope to conduct a comprehensive investigation.

The atmosphere in Japanese society is now quite optimistic. Some people think that life will return to normal. However, experts say that the idea that the danger has passed is quite stupid.

They warn that the winter is coming and people crowded in poorly ventilated rooms may once again see a surge in the number of diagnoses.

Too mysterious! Japan sudden success in fighting the COVID-19… the locals are puzzled