In the process of social interaction, individual behavior not only affects the happiness of others, but also affects the way others respond.

Therefore, the individual’s identity, actions, and reactions are necessary for successful interaction within the group.

Most primates, including humans, live in social groups, and individual success depends on effective social interaction with others, which is particularly prominent in rhesus monkeys. Rhesus monkeys can recognize different individuals and form unrelated relationships and long-term alliances.

They also form mutually beneficial relationships with specific individuals and respond to the actions of other individuals. However, it is still unknown how neurons in the brain of rhesus monkeys participate in group interaction and regulating behavior.

On October 22, 2021, the research team of the Massachusetts General Hospital of Harvard Medical School published a research paper titled: Social agent identity cells in the prefrontal cortex of interacting groups of primates in the Science journal.

By tracking the social interactions between three rhesus monkeys, the study discovered the central role of neurons in the dorsal medial prefrontal cortex of the brain on group behavior and demonstrated how these neurons can regulate the interaction between members of a specific group, revealing The cellular mechanism that supports the interactive behavior of social groups.

These findings may be used to develop treatment strategies for people with related mental illnesses.

First, the research team asked three adult male rhesus monkeys to sit around the turntable and take turns to offer apple slices to one of the other two monkeys as a reward. At the same time, they recorded the activity of a single neuron in a brain area known to play a role in social cognition, which is called the dorsal medial prefrontal cortex (dmPFC). 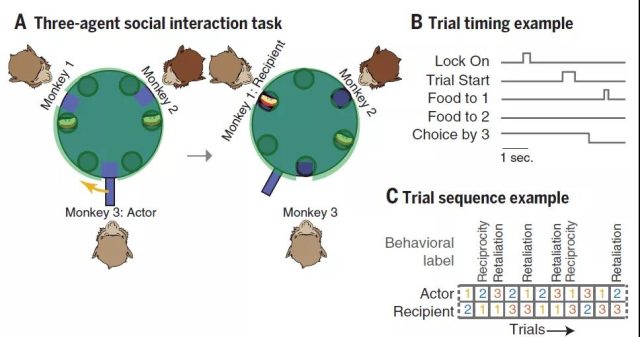 They observed that in these interactions, monkeys would give back past rewards and retaliate when they did not receive rewards from other monkeys. This indicates that animals will track interactions with specific individuals in the group and also track the way they interact.

To further confirm that the monkeys track their interactions with specific individuals, the research team swapped their seats halfway through the experiment. However, none of the monkeys showed a preference for the distribution of system rewards to specific locations. What’s more noteworthy is that regardless of the seating arrangement, they continue to exhibit mutually beneficial behaviors with specific individuals.

Next, they examined the influence of the historical and social background of past interactions on animal behavior. Previous research has shown that past behaviors or the “credibility” of specific individuals and their social status can significantly affect members’ interactions with them.

The research team found that past interactions (that is, the likelihood of their return in the past 20 trials) and differences in individual status advantages have a significant impact on monkey selection. These results show that animals track who they interacted with before, and their choice depends on the social background of the animals they interacted with.

The research team also identified different neurons in the dmPFC that responded to the behavior of other monkeys in the neuronal activity record. These neurons are activated in specific actions and responses of specific individuals (for example, the response of other monkeys providing apple slices leading to rewards), and some neurons also encode information about the monkey’s past behavior.

This information about past interactions with group members influenced the monkey’s decision to give back or retaliate. Conversely, disrupting neuronal activity in dmPFC reduces the monkey’s response to rewards, thereby reducing their ability to form mutually beneficial interactions.

In summary, this work has discovered the important role of dmPFC in planning animal behaviors and responses and interactions with other members, and revealed the cellular mechanisms that support the interaction behavior of social groups. For mental diseases with impaired social interaction ability, treatments that directly or indirectly repair the function of the brain region are expected to improve the lives of such patients.