The two mRNA vaccines approved by the FDA in 2020 both use lipid nanoparticles (LNP) as delivery vehicles, which has also attracted widespread attention to the non-viral carrier of lipid nanoparticles. Systemic administration by injection allows LNP carrying mRNA to circulate into the lungs with the blood.

In addition to the systemic administration of this kind of injection, there is also research to atomize the vaccine and deliver it directly to the lungs by inhalation. This method can avoid the adverse reactions caused by the injection, and the required dose of the vaccine is also greatly reduced. . But is the structure of aerosolized LNP stable during delivery? It is not clear how the airway interacts with cells, proteins, and physical barriers.

Recently, researchers from Emory University School of Medicine in the United States published a research paper titled Optimization of lipid nanoparticles for the delivery of nebulized therapeutic mRNA to the lungs in Nature Biomedical Engineering, a sub-Journal of Nature.

This study describes an iterative screening method based on in vivo clustering to identify the chemical characteristics of LNP that improves lung delivery, and constructs a new type of LNP that efficiently delivers RNA to the lungs through aerosolization.

This aerosolized LNP delivery The mRNA encoding broadly neutralizing antibodies has a higher delivery efficiency than existing RNA delivery systems, and can protect mice from lethal attacks by influenza A H1N1 subtype viruses.

Compound 7C1 is an oligomer-lipid conjugate. The research team formulated 6 groups of LNP drugs with compound 7C1. Dynamic light scattering showed that the three groups of LNPs were unstable and had hydrodynamic diameters greater than 200 nm.

The polyethylene glycol (PEG)-lipid percentages of these three groups were very low. Therefore, they determined the first design principle: PEG-lipid is essential for the formation of a stable 7C1-based LNP structure.

Next, they sprayed the other three groups of LNP at 43 μg mRNA per mouse. Using the IVIS in vivo imaging system, they found that all three groups were transfected to the lungs, but the transfection efficiency was uneven. 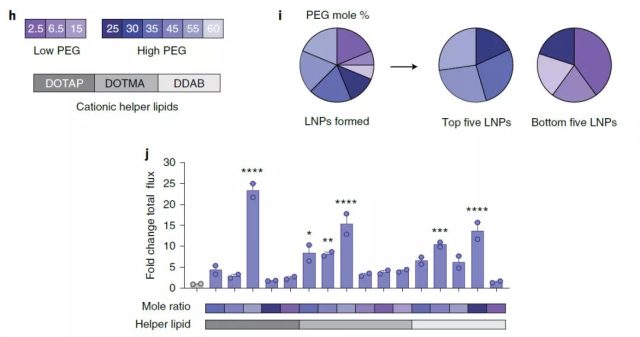 The research team speculates that LNP interactions in the lung can be driven by a variety of forces, including PEG-based hydrophilic interactions and electric charges. Therefore, they used different C-length lipids and different mole percentages of PEG to prepare LNP, and then nebulized them at a dose of 13.5 μg mRNA per mouse.

Using these three design rules, the research team constructed an LNP named Nebulized Lung Delivery 1 (NLD1) for further analysis. They formulated NLD1 to carry anti-HINI virus mRNA and administered it in aerosol at a dose of 100 µg per mouse.

Compared with the existing RNA delivery system, NLD1 is more stable after nebulization, has good tolerance, and has higher transfection efficiency to the lungs. The delivered mRNA is widely expressed in the lungs, making six small mice infected with the virus. All the rats survived. 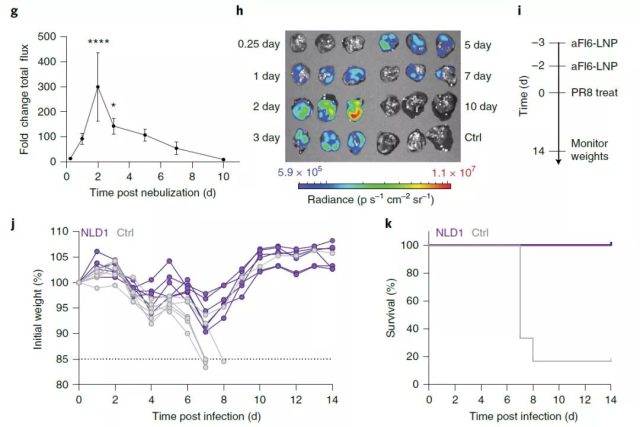 The study described the three principles of LNP design, optimized the composition, molar ratio and structure of LNP composed of lipids, neutral or cationic auxiliary lipids and polyethylene glycol (PEG), and improved the lung delivery of aerosolized LNP It also shows the huge clinical transformation potential of Nebulized Lung Delivery No. 1 (NLD1).