The Human Genome Project (HGP) reveals a large amount of information about the human genome and greatly enhances its role in the development of biomedical research. Thanks to advances in next-generation sequencing technology, researchers have been able to reveal the role of some genetic factors in many diseases, such as cancer, rheumatoid arthritis, Parkinson’s disease and Alzheimer’s disease.

In addition, the results of many studies have revealed the coding and non-coding RNA ( ncRNAs ) an important role, such as miRNA, long ncRNAs ( lncRNA ), circRNA and siRNAs. This lays the foundation for the development of possible treatments for various diseases by introducing nucleic acids into cells to permanently or transiently control and alter gene expression.

In addition, through the development of various delivery systems, RNA can be delivered to the target site, which solves the problems caused by the inherent instability of RNA. Therefore, many RNA-based therapies involving siRNA, ASO, ribozymes, mRNA, aptamers, and CRISPR/Cas have been developed and are undergoing clinical trials in various diseases. RNA-based drugs show excellent application potential.

siRNA is produced by the ribonuclease Dicer through an endonuclease process, which is an endonuclease belonging to the RNase III family and can produce 21-25 nucleotide double-stranded RNA. Once produced, Dicer transfers the siRNA to the RNA-induced silencing complex ( RISC ), which contains Argonaute 2, which degrades the target mRNA molecule. Because of this ability of siRNA, they are used as a possible treatment.

SiRNA therapy is being tested in a variety of cancer treatments. siG12D-LODER is a biodegradable polymer matrix containing siRNA against KRASG12D. Clinical studies ( NCT01188785 ) have shown that the polymer can target tumors and inhibit tumor progression.

Currently, further research ( NCT01676259 ) is underway to test the efficacy of siG12D-LODER combined with chemotherapy drugs ( such as gemcitabine and nab paclitaxel ) in the treatment of patients with locally advanced pancreatic cancer.

Protein kinase N3 ( PKN3 ) is a downstream effector of phosphoinositide-3-kinase ( PI3K ) pathway. Blocking PKN3 can inhibit tumor progression and lymph node metastasis. Atu027 , a liposomal PKN3 siRNA preparation, has good safety in patients with advanced solid tumors. At the end of treatment, 41% of subjects were in stable condition. In subsequent studies, the combination of Atu027 and gemcitabine in the treatment of locally advanced or metastatic pancreatic cancer showed good safety and tolerability. 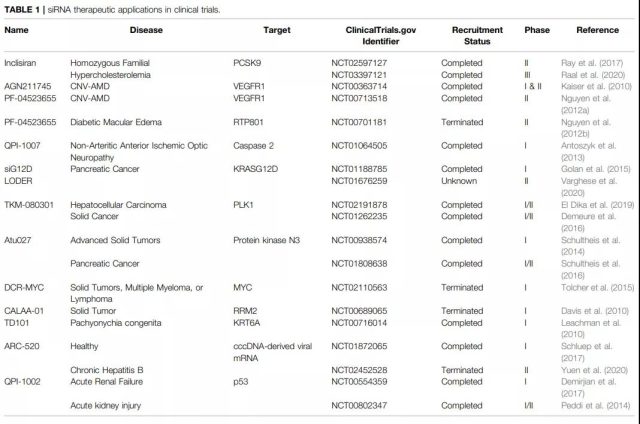 In addition to cancer, the application of SiRNA in other disease fields is also being actively developed. Inclisiran , a phosphorothioate, 2′-O-methyl nucleotide and 2′-fluoro nucleotide modified siRNA targeting PCSK9, subcutaneous injection has been shown to reduce PCSK9 levels in patients with high cardiovascular risk And LDL cholesterol levels.

And it is injected only once every six months, showing excellent patient compliance. On December 11, 2020, Inclisiran was approved by the European Union for listing.

Many siRNA studies are aimed at choroidal neovascularization caused by age-related macular degeneration ( CNV-AMD ), and studies targeting vascular endothelial growth factor receptor-1 ( VEGFR1 ) or RTP801 have shown that they have The desired result, such as AGN211745 and PF-04523655 . In addition, QPI-1007 , an siRNA that inhibits the expression of caspase 2, showed good tolerance and improved vision in patients with optic atrophy.

Antisense nucleic acid ( ASO ) is a single-stranded RNA/DNA molecule of 18-30 base pairs, designed to specifically inhibit mRNA function. They complementally bind to specific mRNAs and hinder mRNA translation or degradation of mRNA through RNase H.

Many preclinical and clinical trials of ASO in the treatment of eye diseases have shown promising results. Leber congenital amaurosis ( LCA ) causes retinal dystrophy due to intron mutations of various genes including centrosome protein 290 ( CEP290 ), causing blindness or severe visual impairment in teenagers.

QR-110 is a single-stranded, phosphorothioate, 2’O-methyl modified splice-regulating RNA oligonucleotide for targeting CEP290. Clinical studies ( NCT03140969 and NCT03913143 ) show that intravitreal injection of QR-110 can rebuild CEP290 levels in fibroblasts of LCA patients, and has good tolerance and safety.

Aptamers are single-stranded nucleic acid ( DNA or RNA ) molecules that bind and inhibit proteins . The ability of aptamers to form shapes provides high affinity and excellent specificity to the target. Because their mode of action is similar to that of antibodies, aptamers are also called chemical antibodies. At present, a variety of aptamers have entered clinical trials for various diseases, such as macular degeneration, diabetic macular edema and chronic inflammatory diseases.

EYE001 is a PEGylated aptamer of VEGF. In an in vitro model, it has shown the ability to completely reduce VEGF-mediated vascular leakage and inhibit retinal neovascularization, thereby improving vision. The study of EYE001 alone or in combination with photodynamic therapy in CNV-AMD patients showed significant visual stabilization or improvement.

In addition to VEGF, the complement pathway also plays an important role in AMD. Zimura , a pegylated single-stranded nucleic acid aptamer that targets complement factor C5 and pegcetacoplan targets C3 and C3b. Their clinical studies have shown that subcutaneous injection can reduce geographic atrophy ( GA ) secondary to AMD . No adverse events will occur.

In addition, ARC1779 is an aptamer targeting the A1 domain of vWF. In clinical trials ( NCT00632242 ), ARC1779 has shown good tolerance and the ability to inhibit vWF-dependent platelet function in patients with thrombotic thrombocytopenic purpura. Emapticap-pegol ( NOX-E36 ) is an aptamer that targets CCL2. In type 2 diabetes patients with proteinuria, subcutaneous injection of Emapticap shows good tolerance and inhibits the CCL2/CCL2 receptor axis. ability.

Ribozymes are molecules that catalyze RNA, hybridize with target RNA and cause RNA degradation, thereby inhibiting the production of specific proteins. Importantly, ribozymes can function without cellular proteins.

RPI.4610 ( Angiozyme ) is a chemically stable anti-VEGFR-1 ribozyme, used in combination with carboplatin and paclitaxel for patients with advanced solid tumors, and has proven to have good safety, bioavailability and tumor localization capabilities. However, it has failed to demonstrate clinical efficacy in patients with metastatic breast cancer.

OZ1 is a tat-vpr specific anti-HIV ribozyme. It is delivered by autologous CD34+ cells. In clinical trials ( NCT00074997 ), CD4+ lymphocytes have been significantly increased, indicating that gene transfer delivered by cells is equally reliable in maintaining the safety and activity of ribozymes.

Although it has been successful in many clinical trials, there are also some research reports that show the lack of effectiveness and safety, such as Ad5CRT targeting human telomerase reverse transcriptase ( hTERT ) RNA encoding RNA in patients with gastrointestinal cancer , and metastatic breast Vascular enzymes or chimeric ribozymes in cancer patients.

Therefore, ribozymes still need to be improved in terms of stability, in vivo activity, co-localization, delivery to specific cells, and sustained stable and long-term expression.

Infectious disease vaccines are currently the leading application of mRNA therapy. The COVID-19 vaccine of Moderma and Pfizer has proven safety and effectiveness in billions of people, showing a strong application prospect in the future. 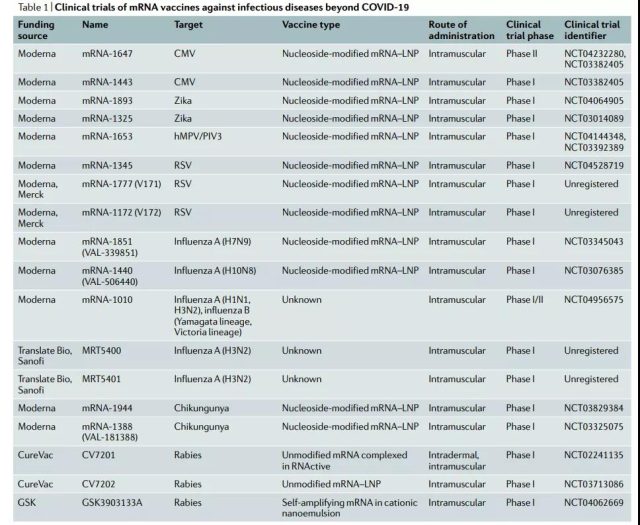 At present, mRNA vaccines are being developed for combined treatments, including chemotherapy, radiotherapy, and checkpoint inhibitors.

Some of these studies have produced long-lasting tumor growth inhibition. Although these DC-based methods are effective, they are also limited by cumbersome procedures and high costs.

Long-term results after 10 years have shown that mRNA vaccines are safe and effective. It delays tumor growth and improves survival, which is closely related to the detected immune response against TAAs.

63% of patients developed an antigen-specific immune response against at least one antigen, and 60% of patients showed an increase in activated IgD+CD38high B cells.

31% of patients had stable disease ( SD ), and the other two-thirds had progressed disease. A similar study aimed at improving anti-tumor immunity tested the use of CV9202 combined with local radiotherapy in patients with advanced NSCLC.

The mRNA-4157 vaccine is an mRNA vaccine developed by Moderna in the United States. It is an individualized tumor vaccine tailored for each tumor patient. The current mRNA-4157 cancer vaccine can contain up to 34 mRNA sequences encoding new antigens. .

In the phase I clinical trial of mRNA-4157 combined with Keytruda, 11 of the 13 patients receiving monotherapy maintained stable disease. In the combination therapy group, 6 out of 20 patients received a response, including 1 complete remission and 5 partial remissions. 6 patients had stable disease, and 8 had worsening conditions.

All adverse events related to mRNA-4157 are reversible and minor. No treatment-related adverse events of grade ≥3 were observed, proving the safety and tolerability of the vaccine. Currently, a number of tumor mRNA vaccines are in the clinical recruitment stage.

The CRISPR-Cas9 system is a bacterial defense mechanism that uses guide RNA ( gRNA ) to mediate DNA endonuclease Cas9 to introduce site-specific breaks in target DNA. This DNA editing capability allows CRISPR-Cas9 to be used as an RNA therapeutic agent in genome modification by synthesizing sgRNA for biological and therapeutic applications.

Many studies have shown that CRISPR/Cas9 can be used to treat genetic diseases, such as cystic fibrosis ( CF ), Duchenne muscular dystrophy ( DMD ), hemoglobinopathy, HIV and β-thalassemia. In one study, CRISPR/Cas9 was able to increase the number of utrophin in myotubes and remove duplicate DMD exons 18-30, thereby producing full-length dystrophin in DMD.

In β-thalassemia, mutations in the human hemoglobin β ( HBB ) gene can be corrected by CRISPR/Cas9. Through the piggyBac transposon, the CRISPR/Cas9 in the patient-derived IPSC effectively corrects the HBB mutation without affecting the pluripotency of the IPSC, and restores the expression of HBB when differentiated into red blood cells. In addition, similar applications of CRISPR-Cas9 have also been confirmed in immune diseases such as AIDS.

Although these studies provide the basis for future CRISPR-Cas9 clinical trials, there are still some challenges to be resolved before CRISPR/Cas9 is further applied to clinical trials and subsequent treatments. Including possible off-target effects of gene editing tools delivered to target cells. In addition, before turning CRISPR-Cas9 into therapeutic applications, the ethical issues and germline applications of CRISPR-Cas9 also need to be considered.

In recent years, RNA-based therapy has gradually become a potential intervention strategy for various diseases. Generally speaking, RNA therapy is divided into different categories according to its mode of action and the molecules used.

Many RNA therapies have been developed for various diseases, and very promising results have been obtained in many preclinical and clinical studies, especially mRNA vaccines have become one of the hottest research fields at present. At present, RNA-based therapy still has many obstacles, and many aspects including delivery systems still need further research and development.

However, it is undeniable that the era of RNA therapy in

the next decade will finally come.