In daily life, boys and girls are very different in many aspects such as behavior, thinking and cognition. It is often believed that boys are more important than rationality, while girls are more sensible.

In school, boys are considered more suitable for studying science. Girls are better at liberal arts; in the workplace, some working men are more likely to be competent, and so on. The differences brought about by gender are far more than these.

John Gray, a famous American psychologist, once compared men to Martians and women to Venusians. He pointed out that the gender differences between men and women’s response to diet and fitness, like a meal plan, can make men lose weight. , But it makes women gain weight. With the development of genomics and metabolomics, a large number of studies have explored gender specificity from the level of gene and cell metabolism.

Some scholars have pointed out that sex karyotype has a great influence on diet-induced obesity, explaining the response of men and women to diet. Gender differences.

Recently, a study by the University of Cincinnati was published in the journal Nature-Metabolism, “Sex-specific genetic regulation of adipose mitochondria and metabolic syndrome by Ndufv2”. The study found that compared with men, women’s fat There are more mitochondria in the medium, which will help prevent obesity and some metabolic diseases. This is the “gender advantage that women have.” 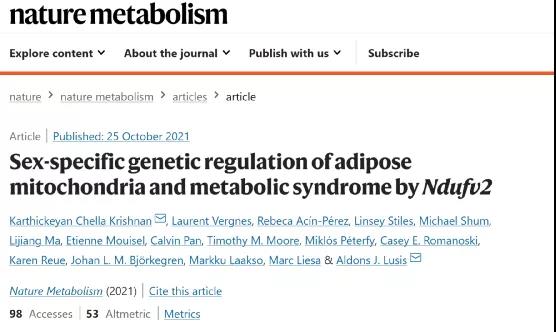 This study used high-throughput omics techniques to compare molecular differences between different individuals, link these differences with physiological functions or disease states, and explore how genetic variation and gender differences affect mitochondria and their functions.

Mitochondria are covered by two membranes, the main place for cells to carry out aerobic respiration. It has its own genetic material and is a unique semi-autonomous organelle. Mitochondria not only provide energy for cells through the production of ATP, but also produce metabolites for biosynthesis, protein modification and signal transduction.

First, an increase in female-specific mitochondria was found in both mouse and human fat. Mitochondria are rich in OXPHOS (oxidative phosphorylation) genes. The results of the study found that female mice have more OXPHOS genes in fat, but not in the liver. And, similar results have been obtained in humans.

In mice (above) and humans (below), female adipose tissue (left) has high mitochondrial OXPHOS genes

Second, it has been found in both mice and humans that mitochondria in fat can predict metabolic syndrome.

The researchers used the mtDNA copy number in fat to represent the quality of mitochondria, and found that the mtDNA content of female mice was significantly rich, and the mtDNA level and metabolic characteristics showed a strong correlation: the fat mtDNA copy number and body weight, the steady state of insulin resistance Negative correlation. Therefore, adipose tissue mitochondrial mass is a powerful predictor of metabolic characteristics in mice and humans.

Then, the team explored the contribution of natural genetic variation to regulate mitochondria to metabolic traits, and fed mice with high-fat and high-sucrose (HF/HS) feed to change the genetic variation of gene expression levels. The results showed that the expression of OXPHOS gene and mtDNA in fat of females carrying TT genotype were higher than those of people carrying CC genotype, and their body weight was lighter, which was not observed in males.

Finally, the research focused on the Ndufv2 gene, which is a potential homeopathic gene located in fat. Female mice tend to express higher Ndufv2 than male mice, and females carrying the TT genotype have higher expression. This association was not observed in male fat or liver tissue. When the Ndufv2 gene was overexpressed, it was found that C57BL/6J (CC genotype) females showed only slight weight loss and increased mitochondria, while A/J (TT genotype) females showed more significant weight loss and mitochondria increase.

This study determined that mitochondrial transcripts are different in different tissues and genders, and that the number of mitochondrial DNA copies has a strong correlation with the metabolic characteristics of mice and humans.

Finally, it was discovered that the Ndufv2 gene in fat regulates obesity by promoting mitochondrial function and transcripts in different genders.

These properly belong to the “gender advantage” of girls, fat girls finally have an excuse not to lose weight! In addition to keeping warm, female fat also has more mitochondria that have higher protection against metabolic diseases!