Why are scientists paying close attention to the COVID-19 situation in UK?

Nature Hot Discussion: Why are scientists all over the world paying close attention to the COVID-19 situation in UK? If the vaccination rate is high, can it be fully unblocked?

The United Kingdom announced on July 19 that it would unblock and lift the epidemic prevention measures. The earliest alpha-mutated and more infectious Delta virus strains were also discovered and reported in the UK, and then Delta spread all over the world. Medical staff around the world published an open letter on “The Lancet”, accusing this behavior.

On November 2, the researchers published an article in Nature, discussing what we can learn from this practice in the UK. Even if the vaccination rate is high, it is not 100% guaranteed to be effective. People in poverty-stricken areas have not even received the first vaccine, and the epidemic is still unclear. Coupled with the high transmission of the SARS-CoV-2 Delta variant, vigilance and protection still need to be maintained.

The COVID-19 pandemic in the UK often heralds later conditions elsewhere. The highly contagious alpha variant was first found there, and then the country reported a high number of cases of the more contagious Delta strain, and then this variant spread in other parts of the world. There has also been a wave of infections in the UK, which seems to have preceded Western Europe now.

It ended the legal requirements for social distancing and the use of masks on July 19, and Wales and Scotland, which had their own public health policies, lifted most of the restrictions on August 7 and 9, respectively.

On October 31, Northern Ireland followed closely. They began to quickly cancel measures to deal with the COVID-19 pneumonia, and gradually opened up tourists and markets.

However, in the environment where the epidemic has not yet been determined and clear, they believe that life can be restored to the days before the pandemic, but that is actually dangerous.

A few days after the announcement of the unblocking, an open letter from scientists and medical staff from all over the world was published on The Lancet, declaring that the British unblocking plan “is a dangerous experiment” and is immature.

As one of the first countries to believe that high vaccine coverage and public responsibility can control the spread of SARS-CoV-2, the United Kingdom has become a control experiment being studied by scientists from all over the world.

Rafael Radi, a biochemist and coordinator of the Uruguay COVID-19 scientific advisory team, said: “We are closely monitoring the increase in cases, trying to analyze what is currently happening and how this might affect our current situation.”

“Nature” magazine tells scientists around the world what they hope to learn from the British experience. On November 2nd, researchers published an article titled “Why scientists worldwide are watching UK COVID infections” in “Nature”. 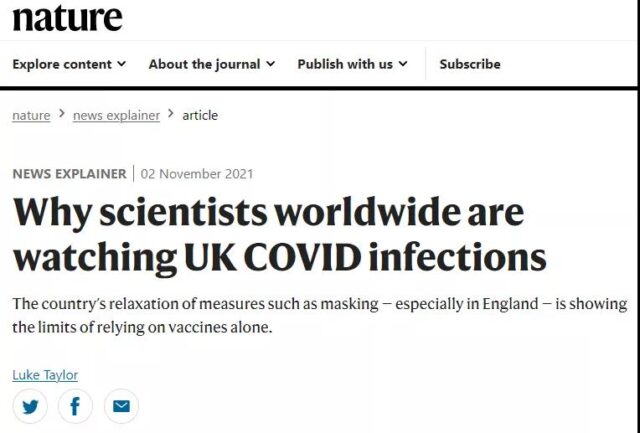 Can vaccines alone prevent the surge in infections?

Between July and October this year, the United Kingdom was hit by 3 million infections, which is comparable to the situation when the country was under strict lockdown at the end of 2020. Although as of October 31, 79.5% of children 12 years and older had received two doses of the vaccine.

Scientists call for the introduction of “soft” public health measures to avoid another lockdown. They said the surge in the number of infections shows that vaccines alone cannot contain the virus. Finishing the vaccine does not mean to relax vigilance. It is not necessary to relax the epidemic prevention measures based on the actual situation.

After all, the vaccine is not 100% effective. Some people may be infected with the COVID-19 virus even after two doses of the vaccine are administered according to the procedure.

Susan Butler Wu, director of medical microbiology at the LAC+USC Medical Center in Los Angeles, California, said: “These vaccines are amazing and they do perform their due role. But why don’t we combine them with other measures to give them the best? Chance?”

Are the actions of individuals responsible for the recent surge?

Researchers say that the surge in the number of infections is not the result of the public’s sudden abandonment of caution. Statistician Christopher Jarvis, head of the CoMix social contact survey at the London School of Hygiene and Tropical Medicine, said: “We did not see continuous growth (social interaction), but a small increase, and then it was affected by whether the school was open and how many people participated. Fluctuates due to the impact of work.”

Adults now come into contact with three to four people on average every day, and before the pandemic, this number surpassed ten people. For children, now that the school has reopened, the number is much higher. Once the authorization is lifted, the use of masks drops, but this is more difficult to measure.

The gradual pace of behavior adjustment can explain why the country has experienced a persistently high infection rate, rather than the surge predicted by the model in August or September. William Hanage, an epidemiologist at the Harvard Chen School of Public Health in Boston, Massachusetts, said that the continued high transmission rate shows that measures such as free and rapid testing for COVID-19 cannot curb the infection, and that high-risk events occur in crowded indoor environments. possible.

Radi said: “This shows how cautious we need to return to normalcy. Even if a high percentage of the population is vaccinated, the ever-increasing interpersonal interactions may lead to a surge in new diseases, hospitalizations and deaths. Uruguay is taking advantage of the number of infections in the UK. As a warning, people are warned of the risk of premature relaxation of restrictions.”

Is the protective effect of vaccines waning?

The UK has launched one of the fastest COVID-19 vaccination campaigns in Europe. But this advantage now seems to be its Achilles’ heel. The country’s first COVID-19 vaccine was vaccinated ten months ago, and antibodies may decline.

A British study found that the effectiveness of vaccines against infections, hospitalizations and deaths dropped significantly after six months, especially for the elderly. Another study conducted in Israel, another country where the vaccine was deployed early, also found similar results.

Paul Hunter, of Health Protection and Medical Research at the University of East Anglia, Norwich, UK, said that one of the driving forces behind this may be the decline in antibody levels. According to the National Bureau of Statistics of the United Kingdom, despite the high infection rate and ongoing vaccination campaigns, antibody levels stabilized in May and then began to decline.

But can the vaccine still resist death and serious disease?

Mutations in the Delta variant — coupled with weakening of vaccine antibodies — are leading to more breakthrough infections. But the vaccine can still significantly prevent hospitalization and death.

A study by the University of Edinburgh in the United Kingdom found that the effectiveness of Pfizer-Biotech and Oxford-AstraZeneca vaccines in preventing deaths was 90% and 91%, respectively.

From October 2020 to January 2021, the number was 185,000. At that time, the number of infections was similar, but the supply of vaccines was relatively high. few.

On September 16, British authorities began to provide a third dose of COVID-19 vaccine to residents 50 years and older and high-risk groups. Although the exact effect of the booster dose has not been determined. Hunter said: “Emerging evidence shows that they are far more effective in reducing infections than we expected.”

A study by the Weizman Institute of Science in Rehovot, Israel found that compared with people who received the second and last dose of Pfizer-Biotech vaccine at least 5 months ago, they received the third dose of Pfizer-Biotech People who are vaccinated are less likely to suffer from severe COVID-19 disease by nearly 20 times, and the probability of infection is reduced by 10 times.

The World Health Organization criticized the introduction of the third dose of vaccine in rich countries, and many people in poor countries have not yet received the first dose.

However, Marc Baguelin, who simulated the COVID-19 infection for the British government at Imperial College London, said that enhanced needles could allow the UK to survive the upcoming winter without imposing new restrictions.

His team’s most optimistic model-based on assumptions about the effectiveness of behavior and immunity-predicts a sustained high infection rate between October 2021 and March 2022, resulting in approximately 43,000 hospitalizations and more than 5,000 deaths.

Baguelin said that because the cold pushes people indoors where the virus is more likely to spread, and as immunity declines, the high circulation of the virus means that the marginal increase in vaccine protection should “have a significant impact on hospitalization and death.” “Everything now depends on strengthening needles.”

Why are scientists paying close attention to the COVID-19 situation in UK?