Nature: How to use sunlight and air to produce fuel?

“Drop-in” fuels are a promising alternative fuel source, which is a synthetic version of petroleum. Derived liquid hydrocarbons (for example, kerosene, gasoline or diesel are all liquid hydrocarbons), which can be made from water and CO2 with the help of solar energy.

The independent steps of this solar fuel production process have been demonstrated before, but it has been very difficult to run the complete steps and optimized system under real-world conditions.

On November 3, 2021, the research team of the Swiss Federal Institute of Technology Zurich published a research paper titled: Drop-in Fuels from Sunlight and Air in the top international academic journal Nature.

The research developed an experimental system that uses sunlight and air to produce fuel, and the system can operate under daily conditions. This research may pave the way for the production of carbon-neutral hydrocarbon fuels, but the production process still needs a lot of optimization and improvement.

The research team developed a solar fuel system installed on the roof of the laboratory. The system consists of three key units: one is a direct air capture device that can extract carbon dioxide and water from the air; the other is a solar redox device that can be used Solar energy converts carbon dioxide and water into a mixture of carbon monoxide and hydrogen (syngas); there is also a gas-to-liquid device that converts synthesis gas into liquid hydrocarbons or methanol. 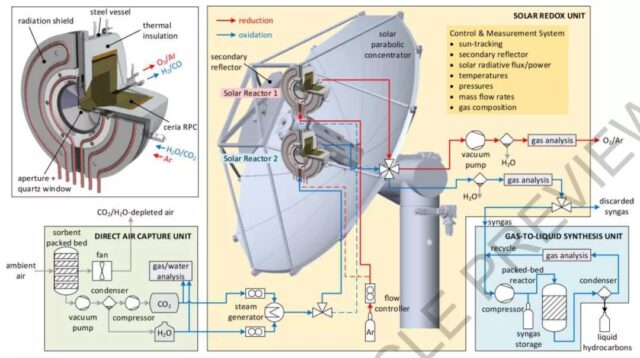 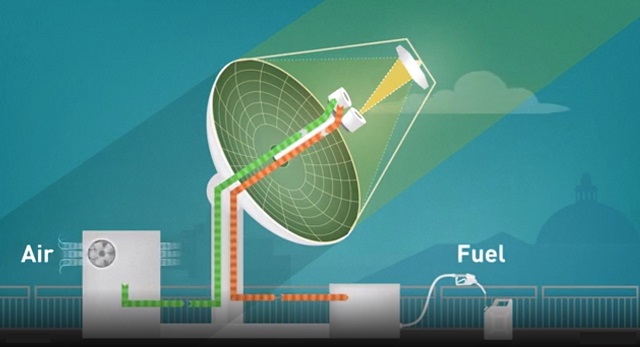 Animated demonstration of the working principle of the solar fuel system

The experimental system can operate smoothly and stably under intermittent solar radiation, and can produce 32 ml of methanol in a typical working time of 7 hours a day, which verifies the technical feasibility of the solar fuel production process.

The research team evaluated the upgrade plan required for their system, which is expected to meet the global aviation kerosene consumption (414 billion liters in 2019). It is estimated that the total land footprint of all solar fuel production plants is about 45,000 square kilometers, equivalent to about 0.5% of the area of ​​the Sahara Desert.

However, such fuels produced by the first-generation commercial solar fuel plants will be more expensive than the fossil kerosene they can replace. The author believes that considering the high initial investment costs required to build solar fuel plants, it is necessary to formulate support policies to promote the large-scale deployment of these fuels.

Nature: How to use sunlight and air to produce fuel?