37℃ is a low-grade fever: Why is the body temperature getting “cooler”?

37℃ is a low-grade fever: Why is the body temperature getting “cooler”? Harvard scientist: lack of exercises.

We usually think that the normal internal temperature (body temperature) of the human body is 37°C. But you will find that during the epidemic prevention and control period, when entering and exiting some indoor institutions and needing to register body temperature, a record sheet full of unfamiliar body temperatures is basically around 36°C.

Today, a body temperature of 37°C is considered a low-grade fever. So how did this 37°C come from?

In 1851, German doctor Carl Reinhold August Wunderlich took millions of temperature measurements from 25,000 subjects and wrote an influential article based on these data, setting the standard for body temperature that has been pursued for more than a century. , That is, the normal body temperature of the human body is 37 ℃. 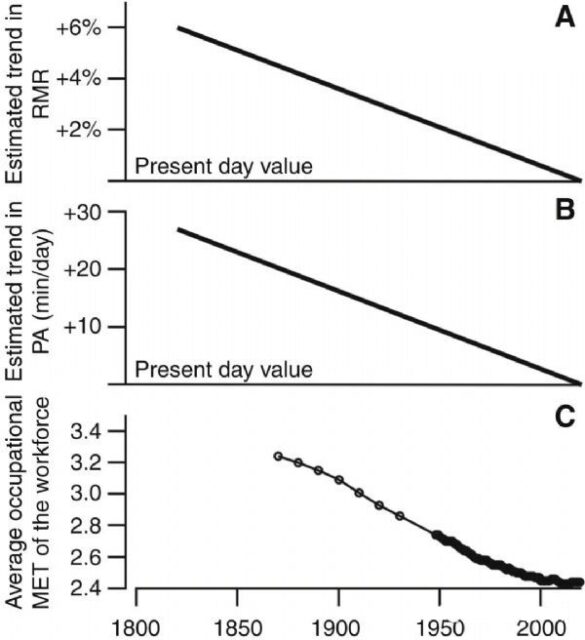 However, more and more scientists have discovered that our “normal” physiology seems to have undergone some subtle changes. Several studies have questioned Wunderlich’s measurement, calling for a lower standard body temperature.

Last year, in a study published in “eLife”, researchers from Stanford University in the United States investigated the medical records of Federal Army veterans after the American Civil War to see the body temperature of about a century ago. Then, compare these data with the records of the National Health Survey in the early 1970s and the Stanford clinical data platform representing the beginning of the 21st century.

Recently, in a study published in “Science Advances”, a research team led by the University of California, Santa Barbara, also discovered a decrease in human body temperature in a relatively remote indigenous tribe in Bolivia. Although some modern changes have taken place there, infections are still common and the level of medical care is low.

Therefore, the reason for the drop in body temperature is obviously not just improved sanitation, clean drinking water or improved medical care.

Recently, in a new study published in “Current Biology”, researchers from Harvard University in the United States gave another explanation: a significant reduction in physical activity.

Muscles are the largest heating organs in the human body. When a person exercises regularly, the increase in muscle mass is often accompanied by an increase in basal metabolism, which in turn will increase their body temperature for several hours or even a day.

This shows that when physical activity is reduced, body temperature remains at a lower level. In addition, due to the advent of air conditioners, humans have lived in an environment that is not stimulated by temperature for a long time, causing the hypothalamus, the body’s thermoregulatory center, to gradually lose the feedback to receive stimulation, reducing the need for thermoregulation.

However, it is unknown how much the physical activity level of the population has declined since the Industrial Revolution. Because the accelerometer and the dual-label water method to measure the level of physical activity have been developed in recent decades.

In order to compare the physical activity level of modern people and the population 200 years ago. The researchers used historical resting body temperature data as a “thermometer” of population levels. They believe that if the relationship between physical activity, metabolic rate, and body temperature can be modeled, theoretically, the research can be reversed, that is, backward.

The idea started with the researchers’ initial estimates. Although it is an estimate, it is still based on a series of assumptions.

Subsequently, the researchers built a model to show that for every 1°C increase in historical body temperature, the resting metabolic rate will change by about 10%. Taking into account the degree of decline in men’s body temperature since the 1820s, their metabolic rate should have dropped by 6% at the same time.

According to the calculation, this is equivalent to about half an hour of physical activity a day. More precisely, for a man weighing 75 kg, brisk walking or jogging for 27 minutes.

A person’s calorie metabolism rate does not only depend on physical activity. Nowadays, due to the advent of cars, televisions and sofas, as well as changes in the working environment, the average amount of exercise for modern people is much less than 50 years ago.

Researchers say that these effects on our metabolic rate and body temperature are not yet clear. There may be differences between men and women.

In addition, fat also acts as an insulator, affecting the body’s heat dissipation, and also increasing the cost of physical activity.

This preliminary estimation method does not correct for changes in fat mass over time. The reduced need for thermoregulation in the modern environment may also affect our metabolic rate, as can the improvement of health and nutrition.

The team admits that their model needs further refinement, but they hope that this approximation can become a benchmark for understanding how reduced physical activity in the industrial age affects health and morbidity.

37℃ is a low-grade fever: Why is the body temperature getting “cooler”?