Use of senescence to kill cancer cells? American scientists artificially design molecules to extend lifespan by 50%.

The well-known investment bank Bank of America Merrill Lynch believes that medical knowledge will double every 73 days after 2020, resulting in the continuous emergence of technologies to extend life and inhibit aging.

In the November issue of “EBioMedicine”, Hillary Le and others from Oregon Health and Science University published an important breakthrough: by artificially designing a molecular compound to target and kill senescent cancer cells and extend lifespan by 50%.

This is close to the current widely adopted NAD+ (a coenzyme that mammals rely on for survival, and the Japanese biotechnology company OFLYE took the lead in launching the mature product Celerine) technology in experimental animals. It has opened up a new anti-aging way. 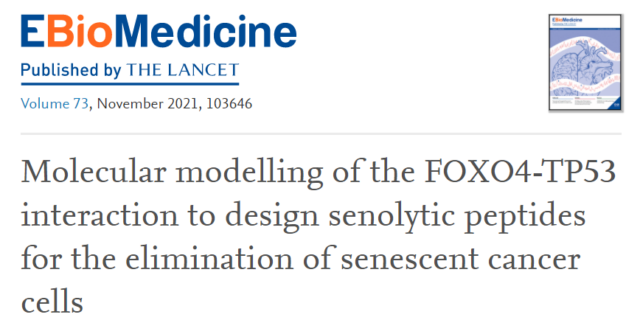 In the new research of Hillary Le’s team, they used a molecular model to design a peptide and let it bind to the FOX04 protein (a protein closely related to cell metabolism) to produce the compound ES2.

In the first test, the researchers put ES2 in cell cultures for melanoma, colorectal cancer, and breast cancer. As a result, normal dividing cells were not affected, and most senescent cancer cells were killed. Analysis suggests that ES2 can cause apoptosis led by TP53 (a gene on chromosome 17, encoding a tumor suppressor protein). 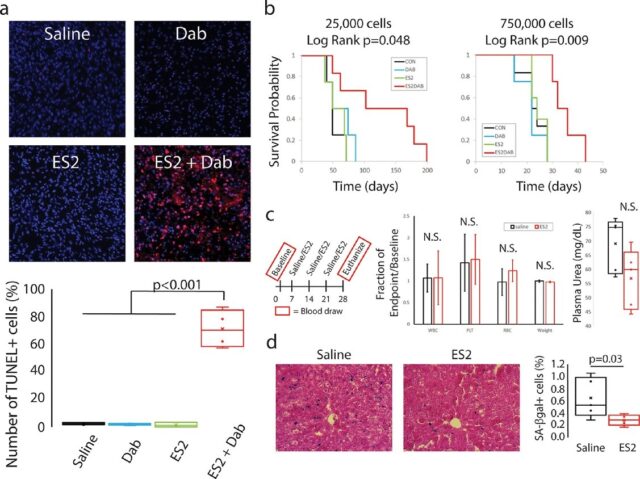 Then the research team tested a combination therapy. They first used the pro-aging agent dalatinib to induce cancer cells to age, and then used ES2 to induce cell apoptosis in aging cancer cells. ES2 itself can also kill senescent cells. .

The experimental results show that compared with the function of using ES2 alone to eliminate 50% of senescent cells in mouse liver cells, the combination of ES2 and dafitinib exhibits strong anti-cancer and life-prolonging abilities, and the number of induced apoptosis is normal 23 Times, the life span of mice with advanced cancer is prolonged by more than 50%.

It should be noted that the experimental results of this therapy on human cells show that it only has a good effect on melanoma, but it has a poor effect on breast and colorectal cancer.

Researchers are still looking for a more suitable for humans. A molecular substance that decays and can fight cancer.

In this study, the core “mystery” of peptide elimination senescent cancer cell therapy that can prolong life by 50% lies in the use of the longevity protein FOXO and the creation of new compounds that can target senescent cells. The principle is the same as that of Celerin. Such NAD+ technology has the same effect by influencing Sirtuins protein overexpression of longevity genes. 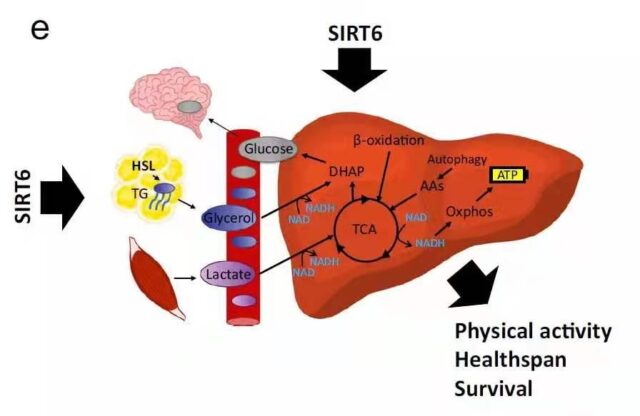 Through research on centenarians, modern scientists have discovered that mutated longevity genes, such as SIRT, are common in their bodies.

In June of this year, Haim Cohen and others of the University of Bar Ilan in Israel proposed in the sub-Journal of Nature that increasing the expression of SIRT6 gene can extend the life span of a mouse model that is highly similar to human genes by 30%, and further revealed that it can increase The de novo synthesis of NAD+ promotes the release of glycerol from adipose tissue and maintains energy homeostasis in old age, thereby prolonging a healthy lifespan.

This experiment verified a previous study by Professor Sinclair of Harvard University. He observed in 2013 that after mice have grown to a size of nearly a year, they are injected with β-nicotinamide nucleotides (NAD molecular precursors).

The index that symbolizes age has returned to about half a year, and research and analysis are related to the overexpression of SIR genes. Subsequent experiments fixed the extension of its lifespan at one-third, thus pioneering the NAD+ aging intervention technology currently popular among the wealthy.

In the following years, hundreds of research papers on β-nicotinamide nucleotides were published in top journals, corroborating and extending Professor Sinclair’s findings.

These papers show that the molecule can also maintain the length of DNA telomeres, explaining its life-extending results from another way.

However, in the early stage of the discovery of β-nicotinamide nucleotide molecules, they were mostly extracted by plant purification methods, which were expensive to prepare and cost as much as 1.56 million a year. They were laughed as exclusive to the rich.

Until 2020, only 100,000 Japanese Jen  of Celerius came out, that this technology began to popularize among high-net-worth individuals.

As mentioned above, the “EBioMedicine” journal paper reveals the possibility of artificially designing molecular compounds to fight cancer and inhibit aging, but it only has a greater effect on some cancer patients.

In contrast, NAD technologies such as Serrari are suitable for everyone and are still the mainstream choice for modern high-net-worth individuals.

With the exponential growth of medical knowledge like Moore’s Law, more life extension methods will appear in the future. For example, the recently emerging O2 arK hyperbaric oxygen chamber, through intermittent inhalation of 100% high-pressure pure oxygen, can also extend telomeres. , The role of clearing senescent cells.

Perhaps as Linda Professor of Economics at the London Business School has said, everyone is a hundred years old has become a happening fact.