1. After three months of “coexistence” with the COVID-19 virus, Singapore’s Epidemic Recovery Index plummeted from fifth to 100, with 130,000 newly diagnosed cases and 506 new deaths. On November 9, the European Council removed Singapore from the list of “lifting travel restrictions” and restored restrictions on it. This has led to discussions about whether Singapore’s anti-epidemic strategy for coexisting with the virus has failed.

2. On November 1, Singaporean parliament officials stated that it is estimated that 2,000 people in Singapore will die from the COVID-19 every year in the future. Although the number of epidemics and deaths remain high, whether the fight against the epidemic has failed depends on the judging criteria. Singapore’s standards are not only about the infection rate and mortality rate, but also consider the lives of the people as a whole.

4. After Singapore’s daily new additions exceeded 3000, it did not continue to soar and has already reached an inflection point. Therefore, Singapore still chooses to continue to implement the “coexistence with the virus” roadmap. In order to reduce the risk, Singapore plans to complete half of the population’s booster vaccination before the end of the year. Singapore’s anti-epidemic is an exploration of getting out of the epidemic, and it is also exploring the way for other countries.

For 3 months of “coexisting” with the COVID-19 virus, Singapore’s Epidemic Recovery Index plummeted from fifth to 100, with 130,000 newly diagnosed cases and 506 deaths

On November 12, the third month of Singapore’s abandonment of the zero-clearing policy, the anti-epidemic policy coexisting with the virus seems to be entering the most difficult period and test. On the same day, the Ministry of Health of Singapore notified 2396 new confirmed cases in just one hundred days. A total of more than 130,000 people have been infected, 8 deaths, and a total of 506 cases.

Has Singapore’s anti-epidemic strategy for coexisting with the virus failed?

▎ On October 9th, Singapore’s Prime Minister Lee Hsien Loong said in his speech: “Singapore cannot be blocked for a long time. The blockade will not succeed, and it will be costly. We will not be able to return to normal life, socialize, reopen the border, and restart the economy. Every blockade will hit business again, employees will lose their jobs, children will lose their normal childhood and campus life, and it will be difficult for families living in two places to meet each other. All of these aggravate psychological and spiritual stress. Therefore, a few months ago, we Judging, the “zero strategy” is no longer realistic for us. So we adopt the “coexistence strategy.”

Starting from August 10 this year, Singapore has begun to coexist with the virus, and plans to gradually open up its economic, social and tourist activities in four stages. Three months later, Singapore seemed to be caught in the quagmire of the epidemic. Up to now, according to Singapore’s Ministry of Health, of all the population including children under 12, 85% have completed the entire vaccination process, and 18% have received booster shots. However, there are still about 3,000 new infections in Singapore every day. Although there seems to be an inflection point, it is still at the peak of the epidemic.

Singapore, a small land, has a high population density, with more than 8,000 people per square kilometer. Assuming that the confirmed cases are evenly distributed, if the quarantine standard of Chengdu’s “time and space companion” is used, as long as the number of infected people in Singapore exceeds 1,000 every day, people all over the country need to be quarantined together! 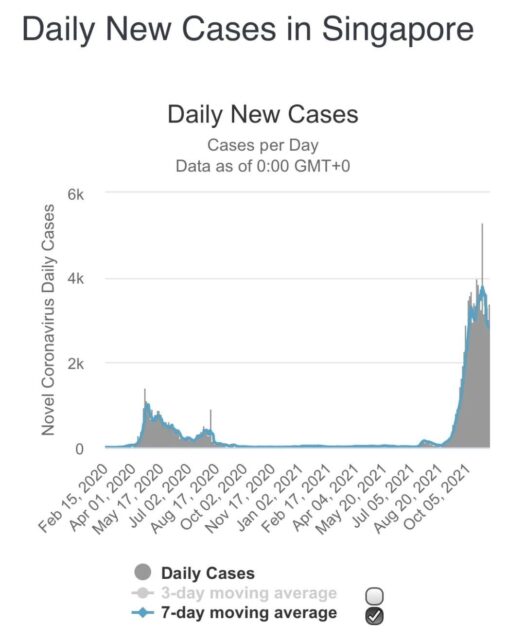 Japan’s Nikkei has ranked more than 120 countries and launched the “Nikkei COVID-19 Recovery Index” based on three major indicators of infection management, vaccination progress, and social mobility in each country. In July, Singapore ranked 5th, but on November 10, this ranking has dropped to 100. 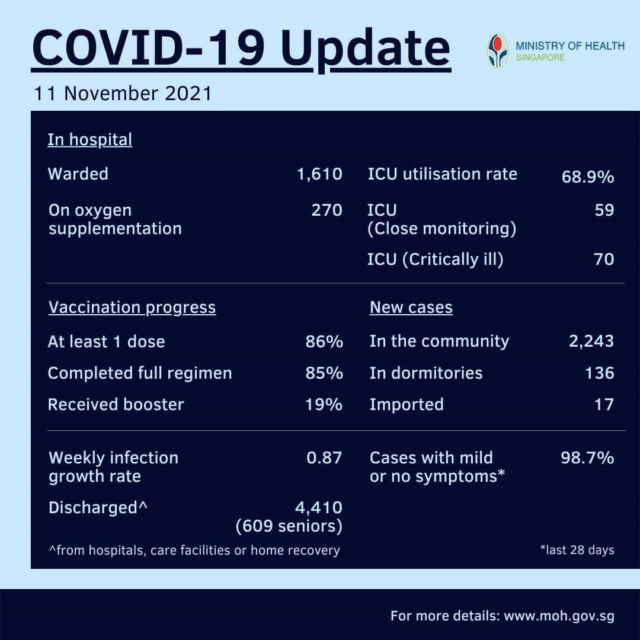 ▎ According to data released by the Ministry of Health of Singapore, 98.7% of 91,581 infected people in the past 28 days have no symptoms or mild symptoms, 0.8% need supplemental oxygen in the general ward, 0.3% are in the ICU, and 0.2% have died 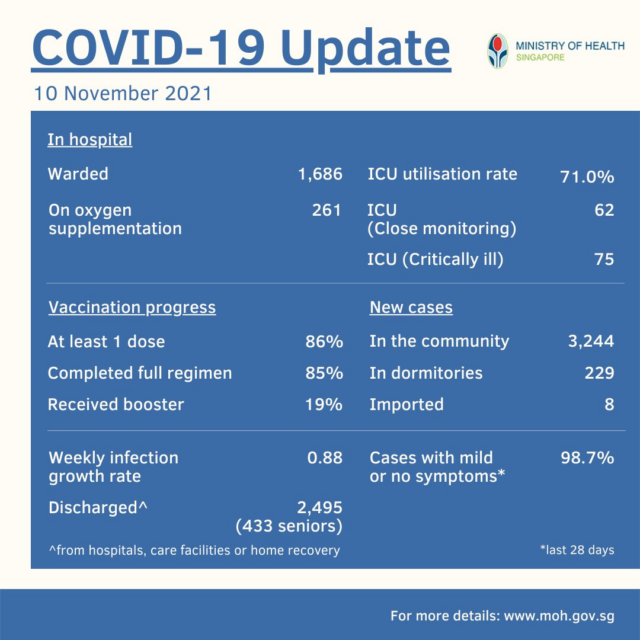 Is it expected that 2,000 people will die from the COVID-19? Has Singapore’s anti-epidemic policy failed?

The epidemic and the number of deaths remain high. Has Singapore’s fight against the epidemic failed? It depends on the criteria for judging success and failure.

On November 1, Singaporean parliament officials stated that in every year in the future, 2,000 people in Singapore may die from the COVID-19!

It has been almost two years since the epidemic has spread, and only 548 people have died in Singapore, but the number of deaths will be four times this number every year in the future! Judging from this absolute figure, Singapore’s fight against the epidemic has completely failed!

However, the number of people who die from the flu every year in Singapore is 4,000. Even if 2,000 people die every year from the COVID-19, there are not as many deaths as the flu.

Singapore’s current case fatality rate from COVID-19 infections is 0.2%, which is equivalent to the rate of deaths from pneumonia after the flu. Calculated with a case fatality rate of 0.2%, 1 million people are infected, and the number of deaths is 2,000. Singapore has a population of 5.7 million. Therefore, Singapore is prepared for about one-fifth of the population to be infected with the COVID-19 every year.

Because Singapore’s current vaccination rate is relatively high, 98% of confirmed patients are asymptomatic or mild, and only 2% are severely ill, and 0.2% of them require ICU treatment.

In such a situation, if we continue to guard against death, the cost will be too great, but the benefits will be very limited. Lee Hsien Loong said, “Every time we blockade, it will hit business again, employees will lose their jobs, children will lose their normal childhood and campus life, and family members who live in two places can hardly meet each other. These all intensify psychological and spiritual pressure.”

It can be seen that the fight against the epidemic has been successful? Singapore’s standards are not just about infection rates and death rates, but also considering people’s lives as a whole.

Unfortunately, the road to coexistence with the virus has not been smooth sailing. On September 27, because the number of confirmed cases in Singapore was around 3,000 every day, 90% of the isolation beds were full, the ICU beds were also tight, and 2/3 of the beds were also occupied.

As a result, Singapore has tightened its anti-epidemic measures, reducing the number of people at social gatherings and restaurants from 5 to 2 people.

On this road, whether Singapore can go faster, slow down, or even need to go backwards, depends entirely on whether the infection caused by the epidemic exceeds the burden that the hospital can bear.

For those who do not approve of “coexisting with the virus” in their hearts, the virus feels that it can be completely eliminated, and Singapore’s “road map” is naturally ridiculous. If they were to give Singapore a piece of advice, it would definitely be: Please be cruel to yourself!

Why does Singapore still choose to continue to implement the “coexistence with the virus” road map?

For Singapore, after the daily number of new additions exceeded 3,000, not only did it not continue to exceed 4,000, but an inflection point has already appeared. This is an inspiring thing! Therefore, Singapore will open up further and continue to coexist with the virus.

From the same day, restrictions on workplaces, sports events, weddings, performances, religious gatherings and conferences have also been relaxed. Those who have completed the vaccination can participate in sports activities in groups of up to 10 people.

For those who participate in conferences and weddings and other ceremonies, only the host Or the speaker should keep a distance of at least 2 meters from the attendees, or up to 10 people can speak at the same time without wearing a mask.

Previously, Singapore introduced a “vaccine differentiation” restriction. People who have not been vaccinated cannot eat in or enter the mall. However, from November 15th, those who cannot be vaccinated will no longer be subject to differentiation restrictions as long as they provide a hospital certificate.

Singapore’s relaxation of its requirements for those who cannot be vaccinated does not mean abandoning the pursuit of vaccination rates. From December 8th, all people who can be vaccinated but are not vaccinated will need to be The hospital or nursing center receives treatment and will bear the medical expenses by itself.

After entering the country, they will undergo a nucleic acid test. As long as the result is negative, they can be exempted from quarantine.

From November 29, Singapore’s “Vaccinator Air Travel Corridor” will be further included in Malaysia, Finland and Sweden.

Therefore, the road to coexistence with the virus is more difficult, but Singapore is still moving forward in an orderly manner. In order to reduce the risk of opening up, Singapore plans to have half of the population complete the booster vaccination before the end of the year.

Singapore is indeed exploring the measure to control COVID-19, but this is an exploration to get out of the epidemic, and it is also exploring the way for other countries.