According to the news from BBC and the Financial Times, a variant of the new coronavirus that was first discovered in Botswana has begun to spread in South Africa.

The variant is called “B.1.1.529”. What is worrying is that many experts describe this variant virus as “very terrifying”, and it may be the most ferocious variant virus they have ever seen, and the degree of mutation has exceeded expectations.

According to data disclosed by local health officials in South Africa, among the short-term new cases in the country, 90% are already caused by this new variant virus. It is reported that the virus contains a large number of mutations, and the number of mutations is twice that of Delta virus.

The type of mutation not only makes it more infectious, but also increases antibody resistance, which may reduce the effectiveness of the existing COVID-19 vaccine .

In view of the serious danger of this new variant of the virus, the United Kingdom has announced that it will return to the travel restriction red list of six southern African countries, including South Africa and Botswana, and will stop the travel of these countries from noon on November 26, local time. Direct flights and compulsory isolation of passengers returning from these countries. 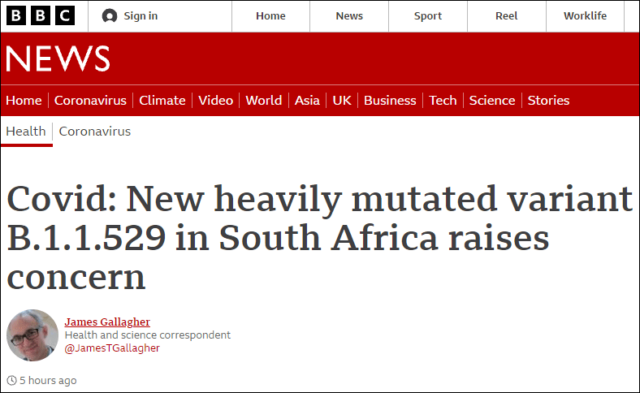 According to the BBC, this new variant virus is still spreading mainly in Gauteng Province, South Africa, where Johannesburg, the largest city in South Africa, is located, but there are signs that the epidemic caused by the virus may have spread further.

On November 26, local time, the WHO may give “B.1.1.529” a Greek letter code, just like the previous mutated viruses such as Delta.

According to the Financial Times, this mutant virus is considered to be the most worrying new coronavirus mutant that researchers have ever seen.

Some unconfirmed data show that the virus is spreading faster in South Africa than previously thought. Much faster. In recent weeks, the proportion of positive test results for the new coronavirus in South Africa has soared.

According to reports, at least 59 mutated virus cases, mainly from South Africa, have completed genome sequencing.

Local health officials revealed that early detection results showed that 90% of the approximately 1,100 new cases that appeared in Gauteng on the 24th were caused by this new variant virus, far exceeding the level of the earlier mutant strains such as Delta. . 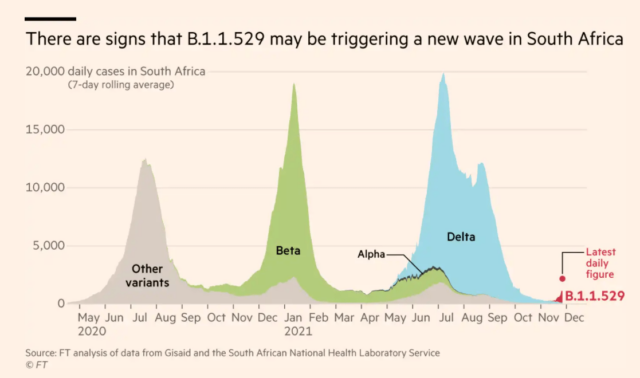 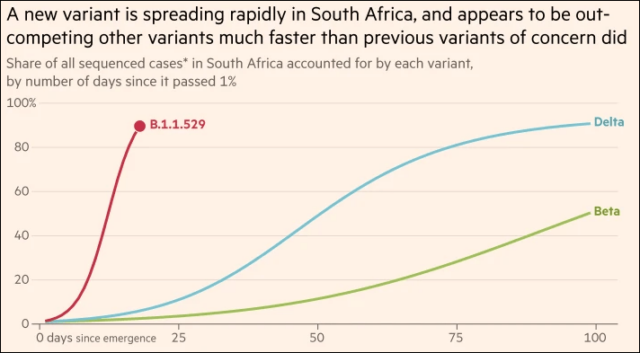 In just 20 days or so, the proportion of “B.1.1.529” in all variant viruses in South Africa has reached as high as 90%. Pictured from “Financial Times”

According to South Africa’s Health Minister Joe Phaahla at a press conference: “When Gauteng is in a period of high epidemics, everyone is in and out of Gauteng from all over South Africa, so in the next few days, you can Surely, the diagnosis rate and number will start to rise.

We only need a few days or weeks to see it.” According to him, in Botswana (4 cases) and Hong Kong (2 cases), new ones were also found. This mutant virus.

According to a Hong Kong media report on November 25, Hong Kong Regal Airport Hotel found two cases with a variant virus that appeared in South Africa.

Tulio de Oliveira, head of the South Africa Center for Epidemic Response and Innovation (CERI), said that he was “very worried” about the outbreak in South Africa, and that a variant of the new coronavirus exists ” Unusual mutant groups” contain a large number of mutations and are “very different” from other mutant viruses that have been circulating before.

The National Public Radio (NPR) of the United States pointed out in its report that the number of mutations in “B.1.1.529” is twice that of the Delta virus that ravages the world .

“This mutant virus really surprised us. It evolves extremely fast at the level of mutation, and it has more mutations than we expected.” Oliveira said.

The mutations in some areas are even several times higher than Delta.

For example, angiotensin-converting enzyme 2 (ACE2), one of the binding sites of the new coronavirus infecting the human body, is generally speaking, it is a protein that helps the virus produce into human cells.

The new mutant virus has 10 mutations here. There are only 2 towers.

WHO Chief Scientist Soumya Swaminathan also said that the new mutant virus currently found in South Africa “has many worrying mutations in the spike protein.” The WHO said in a statement: “Early analysis shows that this mutant virus has a large number of mutations, and further research is needed.”

Jenny Harries, Chief Executive Officer of the UK Health Security Agency (UKHSA), described “B.1.1.529” as “the most serious mutant virus we have encountered so far.” Urgent research to learn more about its transmission capacity, severity and impact on vaccines.

She added that this situation clearly reminds everyone that the pandemic is far from over.

Richard Lessells, a professor from the University of KwaZulu Natal in South Africa, said: “The results of the study make us worry that this virus may enhance the transmission capacity, especially between people. It may bypass parts of the immune system.”

At a press conference held by the Ministry of Health of South Africa on November 25, local time, Oliveira, the head of CERI, also pointed out when showing the slides that “B.1.1.529” contains multiple and increased antibody resistance.

Related mutations may reduce the effectiveness of the COVID-19 vaccine, but also contain mutations that make it more contagious.

The BBC stated that there were many variants of the new coronavirus that seemed terrible before, but in the end the situation was different.

At the beginning of this year, people were worried about the beta virus, because this variant is the easiest to escape the control of the immune system, but in the end, the faster-spreading Delta virus swept the world.

Ravi Gupta, a professor at the University of Cambridge in the United Kingdom, said: “Beta virus is only an immune escape, while Delta virus is manifested in both high infectivity and moderate immune escape.

The new variant has the possibility of both. Sex is very high.”

According to a report by the US Consumer News and Business Channel (CNBC) on November 25, in view of the severity of the “B.1.1.529” variant, the British government will assign South Africa, Botswana, Namibia, Zimbabwe, Lesotho and Swaziland to 6 South African countries have been relisted in their red list of travel restrictions.

Beginning at noon on November 26, local time in the UK, direct flights to these six countries will be suspended, and passengers returning to the UK from there will be forced to quarantine for 10 days.

Also on November 26, local time, WHO will hold an emergency meeting to discuss this new variant virus, which is expected to be included in the “variant of concern”.