On November 30, two Israeli doctors were found to be infected with COVID-19 Omicron variant, and both of them have been received three doses of COVID-19 vaccines . 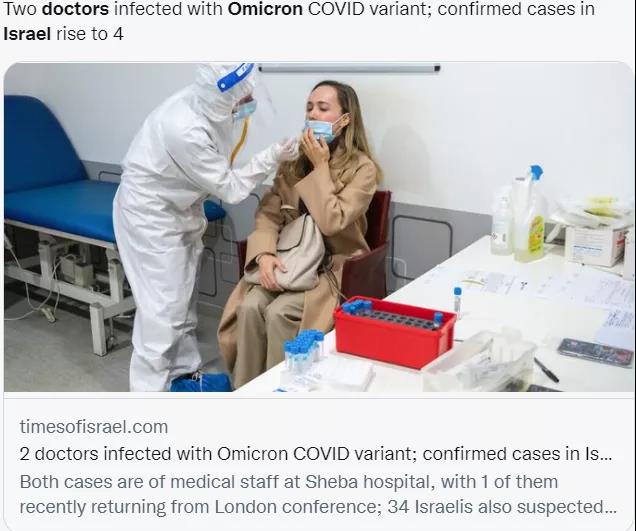 A spokesperson for the Sheba Medical Center near Tel Aviv confirmed that two Israeli doctors were infected . One of the doctors had just returned from a meeting in London last week. The hospital believed that the doctor had probably infected other colleagues.

The hospital stated that the two doctors have already received three doses of Pfizer vaccine (including booster shots ), and so far they have shown mild COVID-19 symptoms.

Health officials in Israel confirmed that two other people were confirmed to be carrying the new Omicron variant, and one of the tourists from Malawi was vaccinated with AstraZeneca (AZ).

On Tuesday, the Manufacturers Association of Israel (MAI) said in a statement that it would start testing the new virus variant Omicron among factory workers. “These tests will help maintain manufacturing continuity and prevent product shortages.” IMA said .

Israel closed its borders to foreigners from all countries for 14 days last Saturday in an attempt to contain the spread of Omicron and reintroduce anti-terrorism phone tracking technology to trace contacts of a small number of potentially infected people.

Israel hopes to better understand the effectiveness of the COVID-19 vaccine against Omicron within these two weeks. Approximately 57% of the country’s 9.4 million people have been vaccinated. Japan also adopted measures to “close the country”.

At present, many countries have imposed travel controls on South Africa. The World Health Organization (WHO) on Tuesday called on all countries to remain calm and take “rational” measures to deal with the new virus strain Omicron.

WHO Director-General Tedros Adhanom said: “We call on all member states to take reasonable and proportional risk reduction measures.”