According to global statistics, among all types of cancer, lung cancer has the highest mortality rate, accounting for 19% of cancer-related deaths and 3% of total deaths worldwide.

The discovery of carcinogens revealed the pathogenesis of NSCLC. Comprehensive molecular analysis showed that in 76% of lung adenocarcinomas (the most common histological subtype of NSCLC), carcinogens in the receptor tyrosine kinase RAS-RAF pathway can be identified.

In addition, there are also studies using transcriptome sequencing to find other oncogenic fusion genes in NSCLC, such as CD74-NRG1.

Although the development of corresponding kinase inhibitors has improved treatment strategies and improved patient survival rates, targeted therapies for most patients with advanced NSCLC have not yet been developed because the tumors of these patients lack known carcinogens.

On November 24, in a new study published in Nature, researchers from the National Cancer Center of Japan used the team’s self-developed lung cancer genome screening platform (LC-SCRUM-Asia) to screen for potential lung cancer carcinogens through a series of studies After verification, they found that CLIP1-LTK is a new target for the treatment of NSCLC.

After using the inhibitor lorlatinib to treat the first NSCLC patient with CLIP1-LTK, good clinical results were achieved.

First, the researchers performed whole transcriptome sequencing (WTS) on samples of NSCLC cases whose oncogenes were not found in the LC-SCRUM-Asia screening, and found the CLIP1-LTK oncogene fusion in one of the positive samples.

Through further RT-PCR technology, Sanger sequencing method, and decomposition fluorescence in situ hybridization (FISH) analysis, it was finally confirmed that the transcript encoding CLIP1-LTK protein was present in the patient’s tumor. 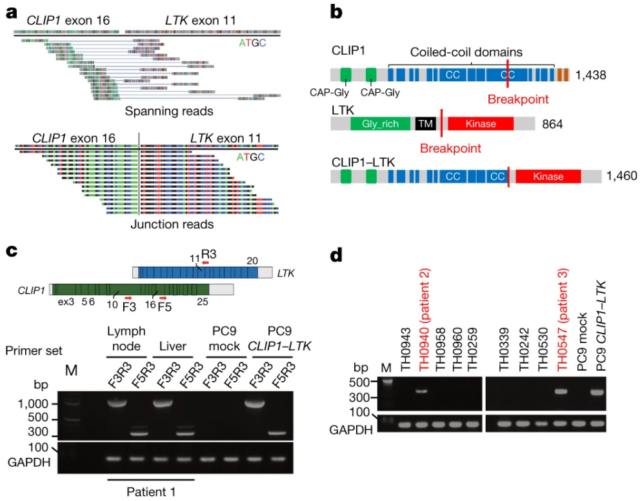 Next, the researchers demonstrated that CLIP1-LTK protein can form dimers (ie protein dimerization), thereby activating CLIP1-LTK kinase. In order to further confirm the transformation activity of CLIP1-LTK in vivo, the researchers transfected the mimic virus, CLIP1, LTK, CLIP1-LTK, CLIP1-LTK (K1140M) (CLIP1-LTK transduced cells with K1140M mutation, the cell NIH3T3 cells that can inactivate the fusion protein kinase were injected subcutaneously into the sidewall of nude mice.

These results indicate that CLIP1-LTK induces tumorigenesis and development by activating its kinase. 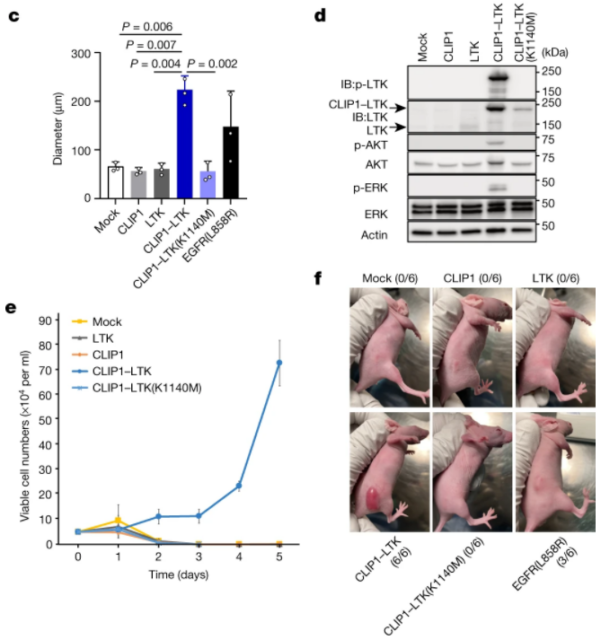 The transformation activity of CLIP1-LTK fusion in vivo (Source: Nature)

Thanks to the above results, looking for kinase inhibitors of CLIP1-LTK protein will have clinical therapeutic significance. Researchers applied 7 ALK tyrosine kinase inhibitors (LTK and ALK have nearly 80% homology kinase domains) and found that lorlatinib works best.

Treating Ba/f3 cells expressing CLIP1-LTK with this inhibitor can inhibit the activity of CLIP1-LTK kinase, which in turn inhibits tumor cell proliferation and induces apoptosis.

Finally, a NSCLC patient with CLIP1-LTK received lorlatinib treatment. The two-month and five-month follow-up CT images of this patient showed rapid and substantial shrinkage of the primary tumor and multiple metastatic tumors. 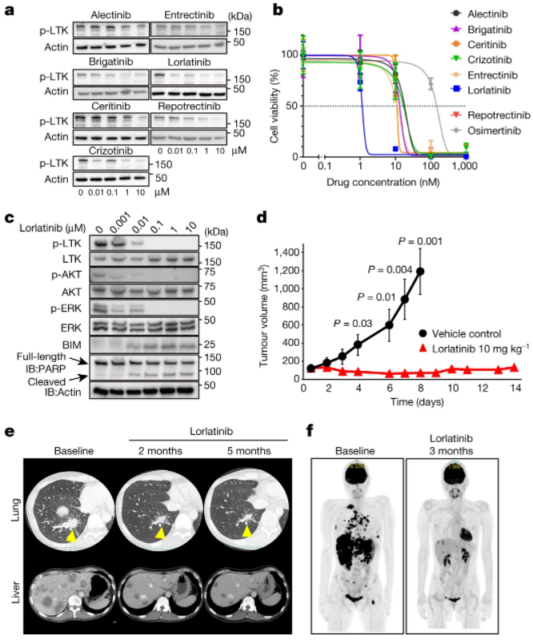 In summary, this study reported for the first time the relationship between LTK mutations and carcinogenic activity, confirming that CLIP1-LTK is a new target for NSCLC, and lorlatinib can be used to treat currently untreated NSCLC patients.