The Governor of Okinawa Prefecture Tamaki Denny yesterday condemned the failure of the U.S. troops stationed in Japan to prevent the epidemic. He was “very angry” and criticized “Don’t bring the U.S. epidemic.” Come to Japan”. 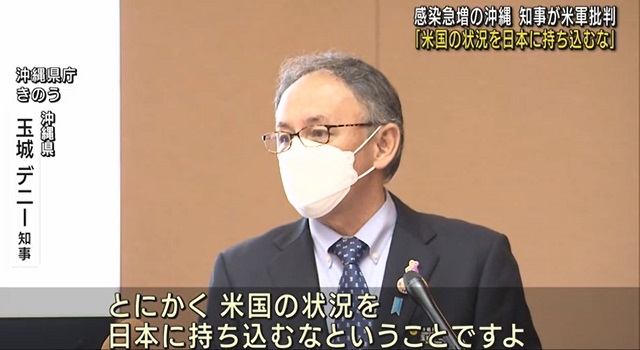 Japan’s Kyodo News and Ryukyu News reported that Tamaki Denny held a press conference yesterday and pointed out that the results of the virus genetic test showed that the U.S. military was the main cause of the spread of the Omicron variant in Omicron.

The epidemic in the United States has been brought to Japan. Don’t bring it to Okinawa.”

Tamaki Denny said that the number of confirmed cases of the US military has once again increased rapidly, which can only be said to show that the epidemic prevention and management measures are not adequate, and he feels “very angry” about this.

This is a structural problem of the agreement itself. He will use the governor of the country.

The Association and the Foreign-related Governors’ Association and other units requested the U.S. and Japanese governments to revise the agreement and propose countermeasures.

In Okinawa Prefecture, since December last year, about 40 to 50 new cases have been diagnosed every day.

The number of confirmed cases in the US military is based on separate statistics and is not included in the confirmed data in Okinawa Prefecture.

There were more than 250 cases of mass infections in the US Army Hansen Camp in December last year.

After that, US soldiers continued to drink and drive. At present, the US military stationed in Okinawa has a total of 3,683 confirmed cases.