According to a global clinical trial led by researchers from University College London (UCL), a once-a-day dolutegravir-based antiretroviral (ART) drug, low cost and easy to take by children, It is also more effective than standard treatments (ie non-dulutvir-based ART drugs) in suppressing HIV.

They found that compared with standard therapies, this dulutvir-based treatment regimen, which has been widely used in adult patients, reduced the chance of treatment failure for young people aged 3 to 18 years of infection by approximately 40%.

The relevant research results were published in the NEJM journal on December 30, 2021, with the title of the paper “Dolutegravir as First- or Second-Line Treatment for HIV-1 Infection in Children”.

The results of these studies are based on a randomized controlled clinical trial called ODYSSEY, which involved more than 700 children from 29 clinical centers in Africa, Europe and Asia who were randomly given dulutvir or a standard anti-HIV drug , And was followed up and investigated for at least two years.

This clinical trial is sponsored by the Penta Foundation and funded by ViiV Healthcare. Its findings provide the World Health Organization (WHO) with new guidelines, recommending the use of dulutvir-based treatment for children. 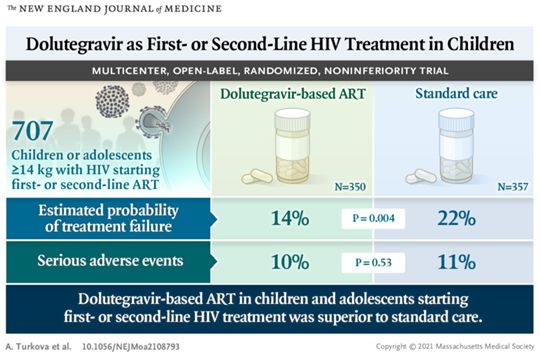 If HIV becomes measurable in the blood-that is, it is not completely suppressed-or if the child has symptoms of HIV-related ill health, then this is considered a treatment failure.

Evidence from adults shows that dulutvir has a high genetic barrier to drug resistance, which means that over time, the virus is unlikely to become resistant to it.

This has also been confirmed in the ODYSSEY clinical trial, and there is much less drug resistance in children and adolescents treated with dulutvir.

Past studies have suggested that dulutvir may be associated with weight gain in adult infected persons, but these authors say that these new findings are comforting for children.

Those taking dulutvir within two years An increase of 1 kg and a height of 1 cm—all of which indicate better growth, rather than abnormal weight gain.

Children in the dulutvir treatment group have better blood lipid status, which means that the risk of cardiovascular disease is lower in the long run.

In this clinical trial, these children weighed more than 14 kg, and most of them were children 6 years and older.

The effectiveness of dulutvir has also been studied in young children and infants weighing less than 14 kg and was recruited as a separate experimental group; the results have not yet been announced.

Most of the participants are in sub-Saharan Africa, and most of the children infected with HIV are there.

This provides information for WHO’s dosage guidelines and helps to gain access to the United States and Europe in 2020 New permission to it.

Dulutvir is an integrase inhibitor that inhibits HIV by inhibiting integrase, which is an enzyme necessary for HIV replication.