Conventional chemotherapy with anthracyclines and cytarabine can achieve high complete remission (CR) rates of 60% to 80% in young adults and 40% to 60% in older adults (>60 years) .

Despite these successful remission rates, relapse after conventional therapy is common, mainly due to the chemical refractoriness of leukemia stem cells.

The estimated five-year survival rate for patients with acute myeloid leukemia (AML) from 2008-2014 was 27.4%.

However, allo-HSCT is not suitable for every patient, and there is a risk of non-relapse mortality and relapse.

Allo-HSCT and donor lymphocyte infusion (DLI) have also shown that cellular immunotherapy is effective in AML.

Both allo-HSCT and DLI have therapeutic potential based on the graft-versus-leukemia (GvL) effect, but carry the risk of life-threatening graft-versus-host disease (GvHD).

The remaining challenges are to separate GvL from GvHD and find ways to enhance GvL without inducing GvHD.

This underscores the urgent need for new and effective therapeutic options to mediate durable eradication of the leukemia tumor burden including leukemia stem cells (LSCs).

Motivated by the success of immunotherapy strategies for other hematological malignancies, such as the anti-CD20 antibody rituximab in non-Hodgkin lymphoma (NHL) or the CD19-specific chimeric antigen receptor (CAR) in acute lymphoblastic leukemia -T cell therapy (ALL) and NHL, there have been some efforts to develop antibody or cell-based immunotherapies against AML.

The key to successful targeted immunotherapy, whether in the form of an antibody or a targeted cell approach, is the identification of suitable target antigens. Chever et al.

The characteristics of ideal target antigens are summarized, that is, they have the potential to induce clinical effects, are immunogenic, and play a key role in the cellular differentiation and proliferation of malignant cells.

A large number of patients should test positive for the antigen. Antigens should contain multiple epitopes and be located on the surface of malignant cells [6].

While for ALL, several other approaches, such as bispecific antibodies and CD19-targeting CAR-T cells, are already in clinical practice, for AML it is more difficult to identify good target antigens.

From patients treated with rituximab, few B cells survived for a period of time given the options available to replace immunoglobulins.

Antigen expression by AML blasts and leukemia stem cells is not limited to these cells but overlaps with normal hematopoiesis, which may lead to severe hematologic toxicity of antigen-targeted therapy.

Based on the discovery that cytotoxic T cells are key players in mediating GvL in allo-HSCT, the concept of adoptive T cell therapy, such as tumor-infiltrating lymphocytes or donor lymphocyte infusion (DLI), was originally developed.

Both approaches place T cells directly in the vicinity of target cells bearing the antigen.

A major difference is that T cell receptors (TCRs) recognize intracellular and extracellular expressed antigens in the case of human leukocyte antigen (HLA) receptors, whereas CAR T cells are HLA independent and recognize surface antigens only in an antibody-specific manner (figure 1).Image 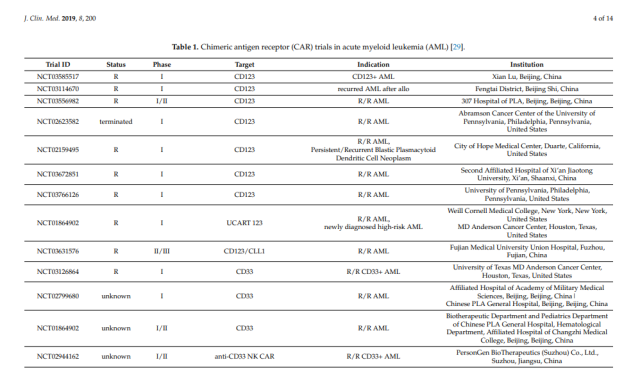 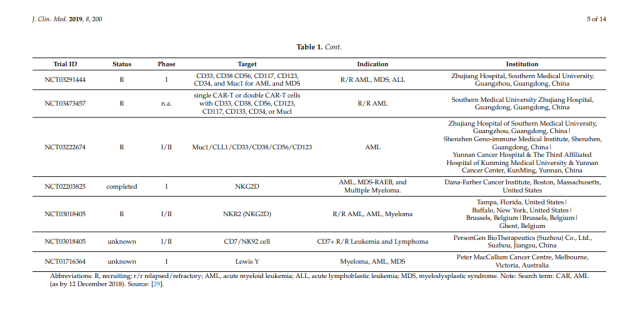 CAR T cells combine the powerful properties of antibodies in target recognition and effector to bring the long-term function of T cells and effector cells directly to cancer cells.

CAR (Figure 1) is an artificial receptor composed of three domains,

(2) the hinge usually derived from CD8α and transmembrane fragments or IgG domains,

CAR T cells are genetically engineered to express the CAR by viral (retroviral, lentiviral, adenoviral) or non-viral techniques such as electroporation, transposon-based or gene editing systems.

The addition of costimulatory signals to the intracellular domain in second- and third-generation CARs aimed to improve the survival of engineered T cells (Fig. 1A).

In fact, second- and third-generation CARs mediate superior activation, proliferation, and in vivo persistence of T cells, depending on the costimulatory signals introduced.

This combination CAR therapy approach was recently proposed by Perna et al. With the help of high-throughput surface group expression data, they identified target antigen pairs and defined desirable characteristics of CAR targets to reduce the risk of antigen escape and off-tumor toxicity.

In addition to antigen escape, the loss of CAR T cells and the production of autoantibodies are important mechanisms for the failure of CAR T cell therapy.

To date, only a few CARs have been studied in clinical trials in the context of AML, and no licensing agency has approved CAR therapy for AML in contrast to B-cell malignancies. CD33 is expressed in up to 90% of leukemic blasts, but also in healthy bone marrow and myeloid progenitor cells.

It is not expressed on early pluripotent CD34-positive hematopoietic stem cells, but is also expressed on hepatocytes, which may explain extrablood toxicity in the form of veno-occlusive liver disease (VOD).

One limitation is that CD34+CD33-negative leukemia stem cells have been reported.

CD33 is an attractive target for immunotherapy against AML. This was demonstrated with the development of Gemtuzumab (Mylotarg®, Pfizer, Berlin, Germany), a humanized drug-conjugated anti-CD33 antibody.

Although it was first approved by the U.S. Food and Drug Administration in 2000, it was withdrawn from the European and U.S. markets in 2010 due to reasons such as bone marrow toxicity and VOD.

It was reintroduced in 2018 following a meta-analysis by Hills et al. demonstrated that low, fractionated doses of Mylotarg® in combination with chemotherapy improved overall survival in 280 treated AML patients.

Due to this experiment and the high expression of CD33 in myeloid leukemia, there is currently a lot of activity considering anti-CD33 CAR therapy (Table 1). To date, one report of r/r AML patients treated with an anti-CD33 CAR has been published.

In this phase I trial, patients received a total of 1.12 × 109 autologous T cells (38% CAR-transduced) and developed cytokine release syndrome (CRS) and pancytopenia and disease 9 weeks after cell infusion progress.

Due to the expression of CD33 in healthy myelopoiesis, it is necessary to develop new safety concepts through anti-CD33 CAR transfusion.

One approach was transient expression of an anti-CD33 CAR, which was tested in an in vivo model of AML xenografted NOD scid gamma (NSG) mice. Only transient cytotoxicity was observed.

Another intriguing approach recently published is to generate leukemia specificity by gene knockout of CD33 in normal hematopoietic stem and progenitor cells.

Lewis Y (LeY) is a carbohydrate antigen that is overexpressed in a variety of epithelial cancers and hematological malignancies including AML, but is only limitedly expressed in normal tissues.

In 2010, Peinert and colleagues published results from a phase 1 CAR-T cell trial in relapsed LeY-expressing AML.

They investigated the autologous second-generation anti-LeY CAR in four patients who received up to 1.3 × 109 total T cells (14-38% with anti-LeY CAR expression).

No grade 3 or 4 toxicity was observed. The best response in one patient was a transient cytogenetic remission. Another patient showed transient blast reduction and two patients showed stable disease.

All patients relapsed between 28 days and 23 months after adoptive cell therapy. The persistence of CAR T cells was demonstrated for up to 10 months.

CD123 is the transmembrane alpha chain of the interleukin 3 receptor.

Due to its surface expression and overexpression on AML blasts and LSCs, and low expression on normal hematopoietic stem cells, CD123 qualifies as a suitable target.

At the time of writing this manuscript, CD123 is being studied in 11 AML clinical trials (Table 1).

CARs typically encode in their scFvs the VH and VL chains from a monoclonal antibody in the extracellular antigen-binding domain. In experimental AML models, hematopoietic toxicity was shown following treatment with anti-CD123 CAR T cells.

In a xenograft mouse model, FLT3+ mice treated with an anti-FLT3 CAR had prolonged survival.

In a second preclinical study, a second-generation 4-1BB CAR targeting the FLT3 ligand (FLT3L) was tested [50].

Bone marrow surface antigen C-type lectin-like molecule 1 (CLL1 or CLEC12A) is a highly expressed glycoprotein in most AML patients. It is expressed on AML blasts and normally differentiated myeloid cells.

Tashiro et al. Going a step further, the introduction of an inducible caspase-9 suicide gene system into the CAR can successfully control anti-CLL1 CAR T cell activity in vitro and in vivo.

CD44v6 is isoform variant 6 of the hyaluronic acid receptor CD44, a class I membrane glycoprotein overexpressed in hematological malignancies including AML and epithelial tumors.

It is absent in hematopoietic stem cells and exhibits low expression levels on normal cells.

Casucci and colleagues designed a second-generation anti-CD44v6 CAR that is cytotoxic to AML cells while sparing normal hematopoietic stem cells.

In this preclinical study, monocytopenia was a dose-limiting toxicity.

To control for this adverse event, a clinical-grade suicide gene, thymidine kinase, and non-immunogenic inducible Caspase 9 (iC9) were co-expressed in an anti-CD44v6 CAR, and iC9 successfully eradicated CAR T cells within hours.

Folate receptor ß (FRß) is predominantly expressed in myeloid hematopoietic cells and is expressed in approximately 70% of primary AML cells.

It is expressed on AML blasts and normally differentiated myeloid cells.

Relatively low expression on CD34+ progenitor cells. It is not expressed on normal hematopoietic stem cells.

CD38 is expressed on most AML blasts but not on healthy human hematopoietic stem cells.

Since the expression level of CD38 in AML is moderate, the combination of ATRA and second-generation anti-CD38 CAR T cells was tested to enhance CD38 expression.

In this study, ATRA enhanced the cytotoxicity of anti-CD38 CAR T cells against AML cells and enhanced CD38 expression in vitro.

CD7 is expressed by T cells and natural killer cells; it is also expressed in more than 90% of lymphocytic T-cell leukemias and lymphomas and in approximately 30% of AML cases, but is absent in normal bone marrow and red blood cells.

The associated side effects of CAR are tumor lysis syndrome and cytokine release syndrome, as well as “on-target but off-tumor” toxicity.

“On target but not tumor” toxicity occurs when the target antigen is expressed not only on target cells but also on normal tissues.

This is the case with HER2, which is expressed in epithelial cells of the gastrointestinal tract, respiratory system, reproductive system, urinary tract, skin, breast, placenta, and normal hematopoietic cells.

A clinical trial investigating a third-generation CAR targeting HER2 reported that one patient experienced respiratory distress within 15 minutes of receiving a single dose of 10^10 CAR T cells, followed by cardiac arrest.

This study highlights the importance of target antigen selection. Other aspects of reducing toxicity, primarily cytokine storm, were the number of CARs infused and the use of immunosuppressants and control mechanisms introduced in the CAR (Fig. 1B).

An elegant way to limit “non-tumor” toxicity is to modify the antibody’s CAR scFv affinity.

Although in B-cell malignancies, CAR T cells are now beginning to establish a therapeutic pillar in clinical practice, the value of CAR T cells in AML remains to be determined.

Several attempts have been made, such as suicide control of CAR T cells, temporal expression of CAR, and enhancement of CAR affinity.

The CAR race has begun, promising to improve and enrich therapeutic devices for AML.