Dissatisfied with the school’s mask mandatory, a parent in the United States threatened the school to “I will bring every sing gun”,  “see you  on Monday”.

The sensational incident took place at a public school in the town of Luray in Page County, Virginia, USA. According to local media “WUSA90”, on the evening of January 20, local time, the school was holding a board meeting, at which it was stated that the mask order would continue to be maintained.

This caused strong dissatisfaction from Amelia King, the parent of the student present. When it was her turn to speak, she fiercely criticized the school’s epidemic policy, including the mask order, and criticized that parents lacked control over their children’s choices because of the previous governor’s policy. She is also very dissatisfied with the bathroom access for transgender people.

Talking about the mask order, she became more and more excited: “No mask order. My child won’t come to school wearing a mask on Monday, okay? That’s impossible.” She threatened: “And I will bring Every gun, loaded and ready…I’ll call every…”

Before she could finish speaking, the board members quickly interrupted her: “Three minutes are up, you have exceeded the time.” Video snapshot from school board

“Well. See you on Monday.” Then, Amelia left the room without looking back.

However, just 50 minutes after she left, the school board voted to make masks an “optional”, allowing parents to decide whether to wear masks for students.

But the school board wasn’t going to let Amelia’s threat go. On January 21, local time, Amelia was charged by local police for making threats at the school. Principal Antonia Fox said, “Page County Public Schools will not take this kind of remarks lightly.”

Luray local police are currently investigating the incident and communicating with federal prosecutors and state and federal officials. Amelia was temporarily released after posting $5,000 in court bail.

Realizing that she had made a fool of herself, Amelia chose to apologize. A school board member read Amelia’s emailed statement.

“I’m by no means all guns loaded, like actual guns, but all the resources I can mobilize to make sure my kids can go to school without masks,” she clarified. “I sincerely apologize for my poor wording.”

Luray Police Chief Bow Cook (Bow Cook) also came out to put out the fire, saying that Amelia was cooperating with the police department and did not want her remarks to cause panic.

“The remarks made by (Amelia) absolutely caused panic among the public, and the parent who made the remarks was aware of this and immediately contacted law enforcement to apologise because (she) had no intention of living up to what she said.” 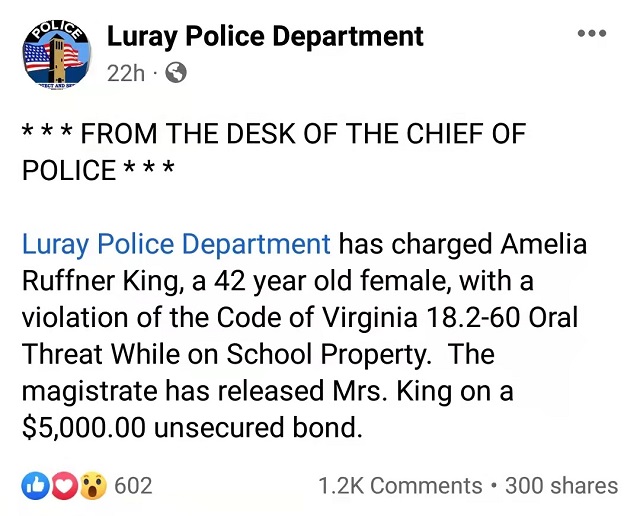 At present, the school has communicated with the local legal department and taken measures to strengthen campus security. Police said they would increase their presence at the school on Monday.

Wearing masks has risen to become a political issue in the United States.

Despite the soaring new cases, in Virginia, where the incident occurred, the new Republican Governor Glenn Youngkin recently lifted the school mask mandate, saying that parents can decide for their children whether to wear masks to school.