Tumors camouflage themselves and evade immunity through protein modification.

The transformation of normal cells into malignant cells is associated with abnormal glycosylation of cell surface proteins.

MUC1 is a representative of them. Compared with normal cell MUC1, the glycosylation and expression patterns have been significantly changed. 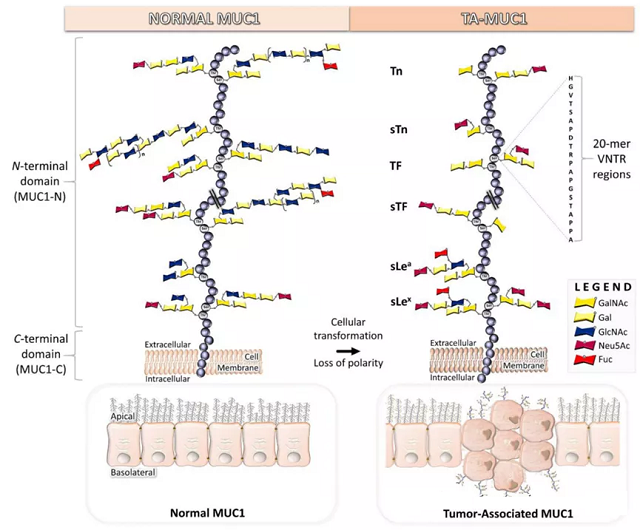 Tumor-associated MUC1 (TAMUC1) is redistributed across the cell surface due to loss of apical-basal polarity . The glycosylation pattern of the extracellular N-terminal domain differs from that of MUC1 expressed on normal cells. Long branched glycans were truncated , mostly showing CorelO-glycans.

Termination of the Core2 structure results from loss of Core 2 β6-GlcNAc transferase activity and/or mutation of the Cosmc chaperone .

Some of the truncated glycans of TAMUC1 were covered with sialic acid due to overexpression of α2,6- and α2,3- sialyltransferases .

Mucin1 (MUC1, CD227) is a type I transmembrane glycoprotein composed of two subunits.

It is expressed on the apical and basolateral surfaces of most secretory gonadal epithelia.

Alpha O-linked GalNAc is always the first glycan to attach to a serine or threonine residue of the MUC1 tandem repeat, and in normal cells, GalNAc is formed by additional glycans to form 8 major core structures.

The structures of Core1 and Core2 are receptors for various glycosyltransferases, and the extension of the C6-branch of Core2 is the most common form in MUC1.

GalNAc was extended by adding GlcNAc to β1,3-linkage, and a second GlcNAc was added to β1,6-linkage to form Core3 and Core4 structures, respectively.

A broad and diverse array of glycans from the MUC1 polypeptide backbone acts as a protective barrier for epithelial cells and plays a functional role in monitoring the extracellular environment and signal transduction into cells.

Additionally, co-translational N-glycosylation links the amide nitrogen of asparagine to GlcNAc at five possible sites, four of which are located in the N-terminal region of MUC1-C and one site in the cell of MUC1-C outside area. N-glycosylation plays a role in MUC1 secretion, protein folding and trafficking .

The expression intensity of MUC1 was negatively correlated with T cell and NK cell infiltration.

Overexpressed MUC1 on the surface of cancer cells provides steric hindrance for the association between cancer cells and cytotoxic lymphocytes , resulting in reduced cancer cell lysis.

In addition, MUC1 inhibits its function by binding to intercellular adhesion molecule 1 (ICAM-1) on T cells .

MUC1 is also expressed on dendritic cells that suppress immune responses. In addition, MUC1 can activate the expression of PD-1 in tumor cells.

The value of MUC1 as a biomarker

Their expression levels have been used as biomarkers of poor prognosis , with most TACAs being sparingly expressed in normal tissues but increased in precancerous and malignant tissues.

Tn antigens are expressed in 90% of breast cancers, 10-90% of other cancers, and 25-70% of colonic precancerous tissues.

80% of epithelial cancers express the sTn antigen, and its expression is associated with reduced overall patient survival.

Both TF and sTF are expressed in breast cancer, whereas TF is more prevalent in gastric, colon, pancreatic, ovarian, prostate and gastric cancers. Tn, sTn and TF antigens are co-expressed on tumor cells and are associated with tumor invasion, metastasis and evasion of the immune system. The sialylated forms of Tn and TF glycans have been found to play key roles in immunosuppression.

In addition to truncated O-glycans, specific sialic acid and ribosyltransferases are expressed to generate sialyl-Lewis antigens , NeuAcα2, 3-Galβ1, 3-(Fucα1,4)-GlcNAc-R (sLea ) and NeuAcα2,3- Galβ1,3-(Fucα1,3)-GlcNAc-R ( sLex ) . sLe a is found in 50% of colon, stomach, and pancreatic cancers, as well as lung, liver, breast, and mesothelioma cancers.

And sLex is present in 90% of pancreatic and gastric cancers, as well as colon, esophageal, ovarian and breast cancers.

Drug research of MUC1 based on abnormal glycosylation

Tumor-associated MUC1 is an antigen widely expressed by tumors and is a good drug target. Monoclonal antibodies, double antibodies, and nanobodies are all under development.

Developed by Glycotope GmbH, Phase 1 clinical trials have shown therapeutic efficacy, especially in heavily pretreated ovarian cancer patients. However, a subsequent phase 2 clinical trial ( NCT01899599) did not show any benefit in results. Currently, there is no gatipotuzumab in the company’s pipeline, and instead it is developing MUC1-ADC (and Daiichi Sankyo), MUC1XIL-15 double antibody, MUC1 CAR-T and CA-NK. 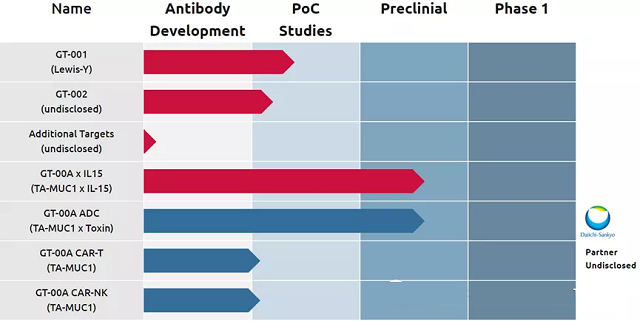 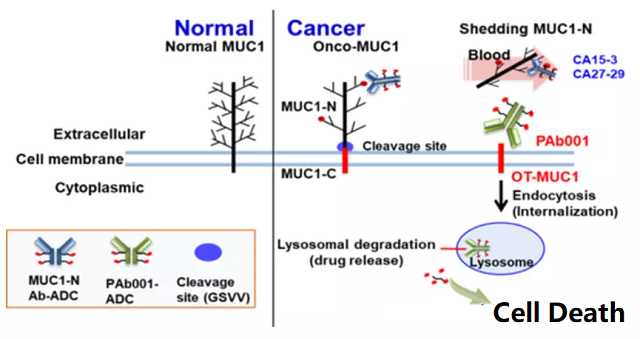 The mechanism of action of PAb001-ADC (Peptron official website)