New York white-tailed deer are infected with Omicron, and it may be a “breakthrough infection”…

In a new study (not peer-reviewed ) published on the preprint server bioRxiv on February 8, Pacific Time, a research team led by Penn State University in the United States found a highly infectious Mikron mutant strain . 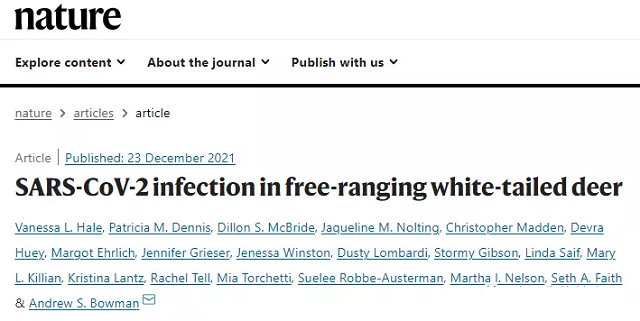 In the past six months, cases of white-tailed deer infection with the new coronavirus have been reported in many places in the United States and Canada , indicating that this North American wild animal is extremely vulnerable to the new coronavirus.

They found that 19 of the deer tested positive for serum antibodies, suggesting that the animals had previously been infected with the new coronavirus. What’s more, the Ormicron variant strain was detected in the nasopharyngeal swabs of seven of the deer.

Phylogenetic analysis revealed that white-tailed deer-infected Omicron sequences were identical to those found in human samples recently infected with the virus from New York City and elsewhere. This suggests that humans transmitted Omicron to white-tailed deer , which then continued to spread among the deer herds.

Notably, the researchers found a deer that was positive for viral RNA and had high levels of neutralizing antibodies, suggesting that it seroconverted rapidly during persistent infection, or a breakthrough infection in an animal previously infected with SARS-CoV-2. .

Although there is currently no evidence that the virus carried by white-tailed deer can be transmitted to humans, the research has further raised concerns among scientists.

“We have demonstrated for the first time that the Ormicon variant has spread into wild animal species, and what will happen next is quite worrisome,” said Suresh Kuchipudi, a professor of virology at Penn State and corresponding author of the study.

“The spread of viruses among white-tailed deer populations provides an opportunity for adaptation and evolution, and it is likely that in the future these viruses will jump to humans,” said Vivek Kapur, a veterinary microbiologist at Penn State University.