Nucleic acid compulsory for all members of Hong Kong! There were nearly 20,000 new diagnoses on the 3rd. Why is the epidemic so serious?

According to the Hong Kong SAR government, on February 21, Hong Kong reported 7,533 new positive cases of the COVID-19 and 13 new deaths. This round of epidemics has been sporadically confirmed since January.

The number of cases has risen significantly since February 4, and the number of positive cases has surged on February 15, with an average daily increase of 5,000 people, with a cumulative death toll of 300.

At present, there are still a large number of new positive cases of unknown origin in the Hong Kong SAR every day.

Virology expert Chang Rongshan told Lilac Garden that he estimated that the actual number of infected people in Hong Kong has reached tens of thousands. “For a city of 7.5 million people, there are tens of thousands of positive infections, and from an epidemiological point of view, the virus has spread in Hong Kong.” 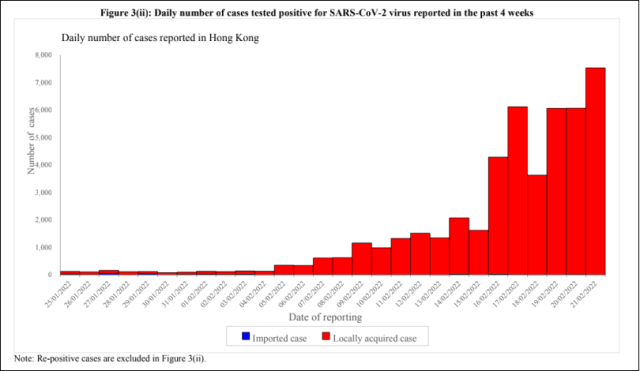 In just over a month, the average daily increase has quadrupled. Why is the epidemic in Hong Kong worsening?

The flow survey information shows that the biggest source of this round of epidemics came from the Kwai Chung Village group. The source of the outbreak in the Kwai Chung Village cluster came from a Pakistani woman who arrived in Hong Kong in December last year. The woman contracted the Omicron variant of the virus during quarantine at the Silka Seaview Hotel in Yau Ma Tei.

The Pakistani woman returned to her home in Dongmanlou, Dakengdong Village, after leaving the quarantine hotel on January 10, passing on the virus to her husband and children. On January 13, her husband went to the garbage house in Yat Kwai House to scavenge waste and sold it on Nam Cheong Street, and the virus spread rapidly in Kwai Chung Village.

Kwai Chung Village is the most populous public housing estate in Hong Kong. Although the Hong Kong government immediately locked down some buildings in Kwai Chung Village for several days, it still failed to stop the spread of the virus.

Cheng Lexin (pseudonym), a law graduate student at City University of Hong Kong, is currently self-isolating at home. On February 12, Cheng Lexin and his friend Zheng Zhu (pseudonym) had a dinner together. A few days later, Zheng Zhu developed symptoms such as cough, sore throat and low-grade fever. After a nucleic acid test, he found that he was unfortunately “stricken”.

“After hearing that he was positive, we judged that we must be close contacts, so we stopped going out and decided to isolate at home.” Cheng Lexin said.

At present, all people entering Hong Kong must download the “Safe Travel App”. In public places, they need to scan different QR codes to register their itineraries. If they are found not to scan the code, they will be fined 10,000 HK Dollars.

If the big data monitors that the user and the confirmed patient have been to the same place, the app will prompt the user to go to the testing point for nucleic acid testing.

However, even if everyone can consciously abide by the epidemic prevention requirements, the accuracy of the app itself is worth a question mark. Cheng Lexin’s app has never reminded him of any exposure risk since he confirmed that he was a close contact on February 16.