Lactic acid bacteria have always been known as probiotics, which can maintain the balance of intestinal flora, stimulate intestinal movement, improve defecation, etc. It seems that there is no harm in doing so. Various lactic acid bacteria drinks and lactobacillus tablets also came into being.

But according to recent scientific research, it turns out that lactic acid bacteria are not always beneficial . Lactobacillus can be harmful in patients with pancreatic ductal adenocarcinoma (PDAC) .

Professor Tracy L. McGaha’s team from the University of Toronto and its teaching hospital in Canada published important research results in “Immunity” under the “Cell” [1].

This study means that patients with pancreatic ductal adenocarcinoma should probably limit their intake of lactic acid bacteria or foods high in tryptophan. In addition, the results of this research provide a new direction for more personalized pancreatic cancer treatment, which may improve the survival of pancreatic cancer patients in the near future through dietary modification or effective inhibitors.

We know that pancreatic cancer has insidious clinical symptoms and is a malignant tumor of the digestive system that is difficult to diagnose and treat. It has always been called “the king of cancer”. Pancreatic ductal adenocarcinoma is the most common type of pancreatic cancer, accounting for up to 90% , with strong invasiveness and poor prognosis.

Until scientists found increased diversity of microbial communities in the guts of long-term survivors of ductal adenocarcinoma , researchers speculated that these altered microbiomes might be associated with the survival and function of immune cells in the tumor microenvironment.

In addition, through fecal flora transplantation experiments, scientists found that when fecal bacteria from long-term survivors were transplanted into tumor-bearing mice, the tumors of the mice became significantly smaller after a period of time. Conversely, transplantation of fecal bacteria from short-term survivors will greatly increase the number of CD4 + Foxp3 + regulatory T cells in tumors, help tumor cells to escape immune immunity, and promote tumor growth [2].

All of the above evidence suggests that the gut microbiota influences the progression of ductal adenocarcinoma and affects the composition and function of immune cells in the tumor microenvironment. But how does the microbiome in the gut affect pancreatic tumor progression?

An immunologically important bacterial metabolite, indole , has jumped into the spotlight of scientists.

Indole , metabolized from the essential amino acid tryptophan , is essential for the integrity of the mucosal barrier, and it also inhibits inflammation by activating the transcriptional regulator AhR, regulating the function of T cells, dendritic cells, and macrophages [3].

Macrophages are a major component of PDAC immune infiltration and provide stromal support for tumor growth [4]. And importantly, the expression of AhR is higher in myeloid cells than in other cell types [5], suggesting that myeloid cells may have a higher sensitivity to AhR ligands .

Based on these current findings, the McGaha team speculates that the microbiota may drive immunosuppression in the PDAC tumor microenvironment by inducing AhR activity in TAMs?

To test this hypothesis, after knocking out the AhR gene or pharmacologically inhibiting AhR activity in TAM, McGaha’s team found that the tumors of PDAC model mice became smaller and the survival time was significantly prolonged . Moreover, the combination of AhR inhibitor CH223191 and PD-L1 inhibitor can effectively improve the survival of mice.

In addition, after the loss of AhR function, inflammatory genes and immune activation-related genes (IL-1β, MHCII, CD40, etc.) are highly expressed on TAM. At the same time, when the absolute number of TAM remained unchanged, the proportion of tumor-infiltrating immune cells was greatly reduced, indicating that other immune cells infiltrating the tumor increased, such as T cells.

Flow cytometry found that CD8 + T cells did increase in terms of infiltrating ratio or absolute number . And the increased T cells were mainly effector or memory type of CD62L neg CD44 hi , with high expression of interferon (IFN-γ) and granzyme (GZMB) .

When CD8 + T cells were removed or antibodies were used to block IFN-γ, the anti-tumor effect of AhR knockout in TAM disappeared, indicating that after the autoimmune function of AhR knockout TAM was activated, it secondary regulates T cells. function, prompting it to release more IFN-γ to kill tumors .

So what substances in the tumor microenvironment activate AhR and block the TAM-regulated T cells to release IFN-γ to kill tumors?

After that, it can effectively increase the expression of PD-L1 and MHCII in TAM, attract more IFN-γ + TNF-α + CD8 + T cell infiltration, improve the immune response effect, and inhibit tumor growth .

Only murinus can promote the expression of oncogenes such as Arg1, Ido1, and IL-10, reduce the infiltration of CD8 + T cells, increase the infiltration of myeloid-derived suppressor cells (MDSC), inhibit tumor immunity, and promote tumor growth . Thus, indole plays a key role in tumor development.

Since indole is produced by lactic acid bacteria by metabolizing tryptophan, which is obtained through food, could dietary changes affect pancreatic cancer progression?

Moreover, the expression of immune factors and tumor-promoting genes will also change correspondingly with the change of diet.

Tumors were significantly smaller in mice lacking tryptophan in the diet (left), and the infiltration of killer T cells was significantly increased (right), and the effects of the diet were reversed by indole supplementation

The discovery of McGaha’s team is undoubtedly exciting, and it is natural that we like to see the use of painless and non-invasive diet to improve the survival of cancer patients. At the same time, we also need some thinking.

As an essential amino acid, tryptophan has other important functions besides being metabolized to indole to activate AhR. For example, tryptophan is used as a raw material for the synthesis of neurotransmitters (serotonin) and neuromodulators (tryptamine), so does deficiency cause neurological disorders?

In addition, indole metabolized by tryptophan can not only activate AhR receptors, but also induce enteroendocrine L cells to release glucagon-like peptides, promote insulin secretion, and slow gastric emptying [6]. How to balance tryptophan deficiency Influence in this regard? 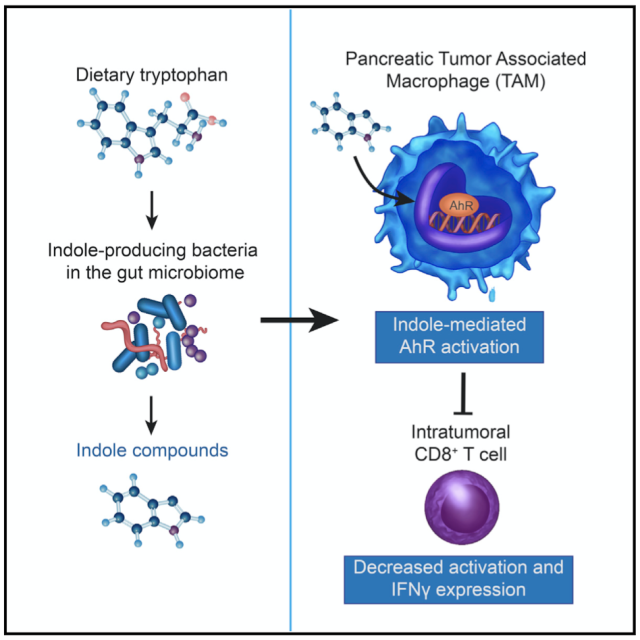 Additionally, although the McGaha team showed that pharmacological inhibition of AhR could improve tumor therapy in mice, tryptophan metabolism is not a key pathway regulating AhR function in mammals [7].

And due to the heterogeneity of cancer patients, different degrees of tumor immune infiltration and the composition of microbial taxa, are there limitations in the application of AhR inhibition in cancer?

However, a first-in-human clinical trial of AhR has been initiated in patients with advanced lung, colorectal, and urothelial cancer (Identifier: NTC04069026) , which will provide an indication of whether AhR is a legitimate target for cancer therapy decisive test.