Japanese professor:  Better not to quit smoking if you don’t want to die early.

Kunihiko Takeda is a professor at Nihon University. He believes that cigarettes cause cancer is a complete fallacy.

He wrote a book “If you don’t want to die early, it’s better not to quit smoking”. In the article, he proposed that smoking is not the root cause of lung cancer.

There is no direct evidence of a causal relationship between lung cancers. 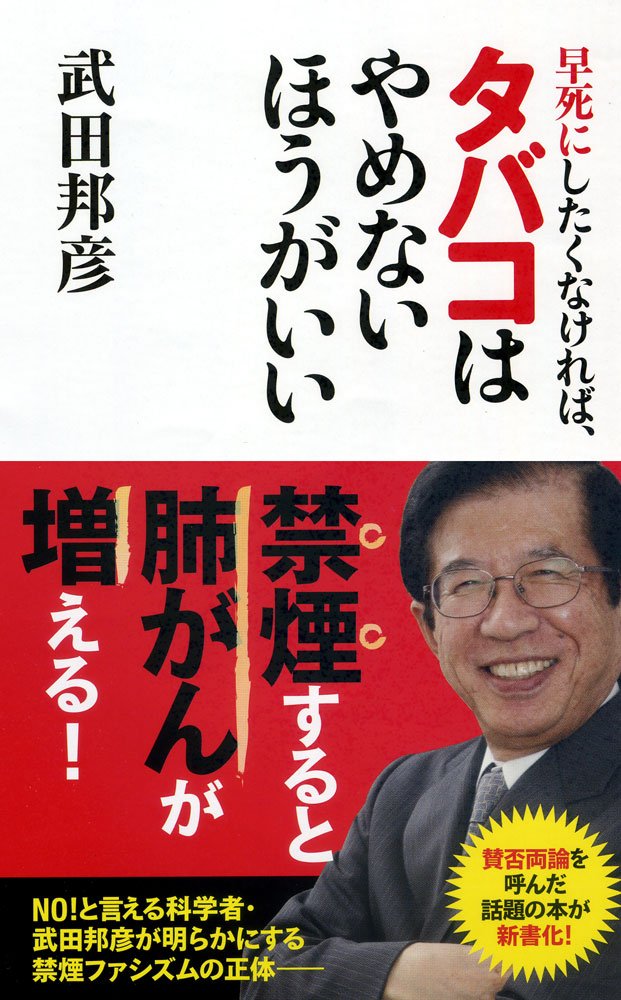 This view aroused extensive discussion among medical scientists and the public at that time, and many experts firmly refuted his view.

It’s amazing how some people insist on equating a possible association with a cause-and-effect relationship to getting sick from smoking.

In fact, recently a Japanese university professor Kunihiko Takeda published a new book “If you don’t want to die early, it’s better not to quit smoking”, and made an amazing point:

One of the “smoking cancer” myths: the data is wrong

In the early 1990s, Japan started a comprehensive tobacco control campaign. There were about 30 million male smokers in Japan, and fewer than 50,000 smokers died of lung cancer, accounting for less than 0.17%. After more than 20 years of tobacco control, smokers who die from lung cancer account for 8% of Japanese smokers, and the number of women dying from cancer has increased fivefold.

The data relationship for this disease proves that the association between smokers and lung cancer is inconclusive, so there is no direct causal relationship.

When studying the relationship between smoking and lung cancer, all smokers should be included, and those who believe that smoking is harmful are only locked into smokers who die from lung cancer, while the majority of smokers and non-smoking cancers Patients are ignored.

‘Smoking cancer’ fallacy 3: The relationship is not clear

Smoking is not the root cause of lung cancer, and there is no strong data to prove that smoking causes lung cancer. On the contrary, the suicide rate of Japanese smokers is lower than that of non-smokers, smokers are less likely to catch colds, etc., and even smokers live longer than non-smokers.

Smoking is not the root cause of lung cancer, and there is no strong data to prove that smoking causes lung cancer. On the contrary, the suicide rate of Japanese smokers is lower than that of non-smokers, smokers are less likely to catch colds, etc., and even smokers live longer than non-smokers.

So why is there a causal link between smoking and lung cancer? At least one reason is that researchers have serious biases about smokers and smoking behavior. A similar case was used to look at the CDC’s health survey of nuclear-armed soldiers.

The CDC looked at the incidence of secondary leukemia at Nevada atomic weapons testing units, with 82 percent of investigators being followed and 18 percent being in contact with investigators.

They have preconceived notions of “leukemia caused by atomic weapons,” and their behavior and sample selection are just to fit that stereotype.

In order to prove that tobacco is harmful, humans have spent hundreds of years!

Tobacco has existed for 5,000 years, and archaeological discoveries have preserved a half-relief portrait in a shrine in Mexico, in which a Mayan priest in a dress wears a hat-shaped tobacco, holds a pipe, and blows a pipe. Inhaling and exhaling smoke, “he” is also the earliest smoker in the world.

In ancient times, in the eyes of Native Americans, tobacco was widely used, not only as a panacea to cure all diseases, but also as a gift for festival sacrifices. Tobacco as an addictive daily pastime was also spread by Native Americans.

After Columbus discovered the New World in 1492, tobacco was introduced to the world. In the following hundreds of years, tobacco has even become a magic medicine for the treatment of diseases and cancer.

A Spanish doctor named Nicolas Monades claimed that tobacco can cure cancer, including cancer. Including more than 20 diseases , and even a new “treatment” -tobacco enema has emerged since then .

However, more and more smokers died, and more people discovered the harm of tobacco. In 1828, the discovery of nicotine made the view that cigarettes are harmless was slammed, and then a variety of carcinogens in tobacco were discovered.

Since then, people’s attitudes towards tobacco have undergone tremendous changes. Tobacco is no longer a “panacea”, but a “poison” that harms people. 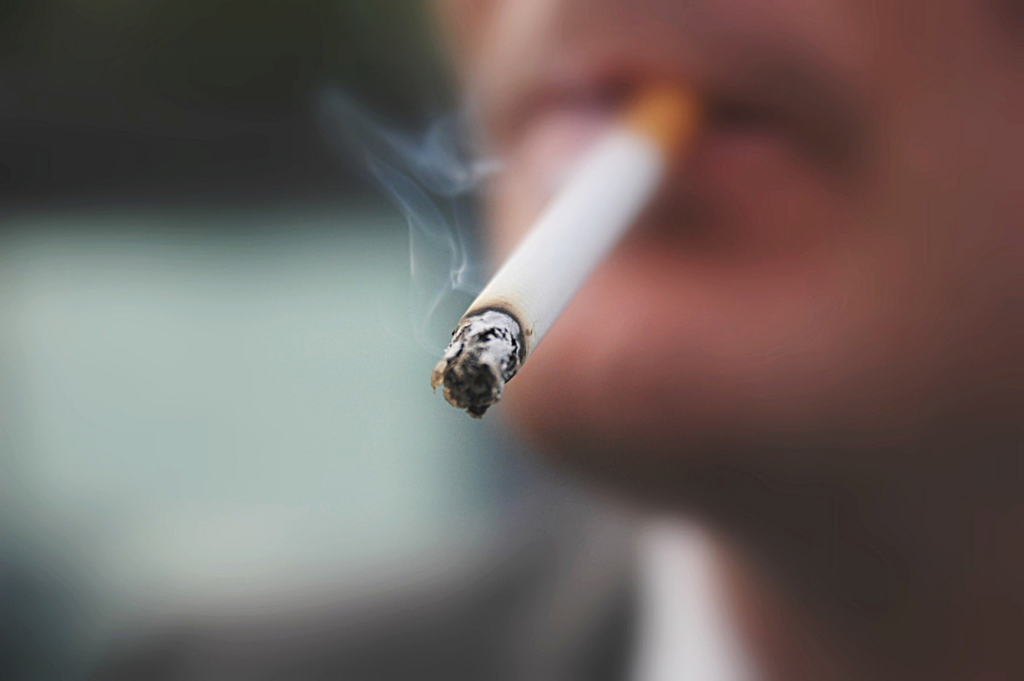 The direct evidence that tobacco causes cancer, everyone should know!

Everyone knows that cancer is the result of genetic mutation. In 2016, an in-depth analysis of 5,243 patients involving 17 types of cancer in “Science” finally found that “smoking” causes somatic gene mutation, which is associated with 7 types of cancer. There is evidence of direct correlation, among which lung cancer has the highest mutation probability. One pack of cigarettes per day for a year can cause 150 gene mutations in originally normal lung cells.

What scientific evidence is there about the dangers of cigarettes?

1. Contains a variety of carcinogens

Cigarettes contain at least 69 carcinogens, one of which is known as tar. When a person smokes, tar will enter the lungs with the smoke, attach to the inner wall of the lungs, accumulate for a long time, and the pulmonary cilia will be destroyed, losing the protective function of the lungs.

In addition to various carcinogens, each cigarette even contains two radioactive elements, polonium and radium. These two elements not only cause cancer, but polonium cannot be excreted from the body. It will enter the blood vessels, damage various organs such as the heart, lungs, and stomach, and cause systemic lesions.

After learning about the dangers of smoking, some people make up their minds to quit smoking. However, there are endless public opinions on smoking cessation on the Internet, and there are even rumors that it is easier to get lung cancer and myocardial infarction after quitting smoking!

Indeed, when the body has been used to tobacco for a long time and suddenly quits, it will break the physiological balance and lead to some “withdrawal reactions” in the body, including: nervousness, short temper, anxiety and depression, inability to concentrate, decreased sleep quality, etc. , and even the possibility of weight gain.

But these symptoms are not diseases, but a normal body adjustment, that is, the medical “withdrawal reaction”. Withdrawal is a series of syndromes caused by excessive dependence of the human body on nicotine and tar, resulting in neurohumoral endocrine disorders.

These reactions are temporary. It is a kind of self-regulation of the body. When the body adapts to the state without nicotine stimulation, these symptoms will subside on their own .

In general, the withdrawal reaction will not cause serious organic diseases in the human body.

Do people who never smoke all their lives live longer?

In the 1950s, a prospective study of the lifespan of smokers and non-smokers was conducted over a period of half a century and involved more than 30,000 male British doctors.

The results of this study showed that compared with people who smoked and did not smoke, there was a 10-year difference in survival; the earlier the smoking cessation, the more obvious the survival benefit.

Why do some people live longer when they smoke?

When it comes to quitting smoking, there are always voices saying that there are people around who don’t smoke and will suffer from cancer, and some people smoke for a lifetime and live a long time. The debate on “smoking and longevity” has never stopped. Why do some people live long after smoking for decades?

A study from the University of California, Los Angeles found that smoking and longevity may also be related to genes. These people have different genetic variants in their bodies from normal people , which can protect against the harm caused by smoking, but such people are rare.

The longevity of smokers is only a few “lucky ones”. As an ordinary person, it is best not to take chances and quit smoking as soon as possible, which is the “right way”. If it is difficult to quit smoking, you can consult the smoking cessation clinic of the hospital, and if necessary, you can use drugs to help you quit smoking.