How can you stay energized with only 4 hours of sleep per night?

How can you stay energized with only 4 hours of sleep per night? Your sleep habits may already be written in the “factory settings”

While most experts recommend 7-9 hours of sleep per day for adults, with the best time to fall asleep at 10-12pm, and a nap between 2-4pm, you may have your own sleep pattern that works best for you. .

No matter how much or how you sleep, these habits may be “factory settings” written in your genes. Today, let’s take a look at the sleep-related genes that have been identified by scientists!

Adequate and effective sleep is essential to our health. However, some people are born short sleepers who sleep much less than the average person, neither wanting to sleep more nor having any noticeable negative health effects in the case of short sleep.

In October 2020, the team of Fu Huihui and Louis J Ptáček from the University of California, San Francisco, published their research in the journal Current Biology, a sub-journal of Cell, and found that two independent mutations in the GRM1 gene can cause familial natural short sleep.

These results fully demonstrate the important role of GRM1 in regulating sleep duration.

In fact, this is not the first time the team has discovered a short sleep gene. Before that, they had reported genes such as DEC2, ADRB1, and NPSR1, which were even more potent than GRM1.

The first short sleep gene was reported in 2009, when the team found a specific mutation in a gene called DEC2 in a mother and daughter who felt well rested after about six hours of sleep each night .

A protein encoded by DEC2 helps turn off the expression of other genes, including the gene encoding the orexin protein known to regulate wakefulness.

Although this finding provides the first solid evidence that naturally short sleep is heritable. But this mutation is very rare and doesn’t apply to all short sleepers.

The study was published in the journal Science in 2009 under the title The transcriptional repressor DEC2 regulates sleep length in mammals.

In 2019, after ten years of painstaking research, the team once again reported a short sleep gene, ADRB1 .

The researchers identified the mutation by studying another family that contained natural short sleepers.

This mutation is also extremely rare, and they estimate it to occur in about 0.004% of people. Mice with this mutation slept an hour less per day on average than control mice.

The study was published in the August 28, 2019, issue of Neuron under the title A Rare Mutation of β1-Adrenergic Receptor Affects Sleep/Wake Behaviors.

They found that mutations in this gene were associated with the natural short sleep phenotype in humans. People with the NPSR1 mutation tended to sleep 2-4 hours less than average, while experimental mice slept 71 minutes less than average.

In addition, the mice were resistant to memory deficits associated with sleep deprivation.

Some people can be energized with very little sleep, but others are not so lucky and need longer sleep than most.

The study was published in the journal Nature in November 2016 under the title Forward-genetics analysis of sleep in randomly mutagenized mice. 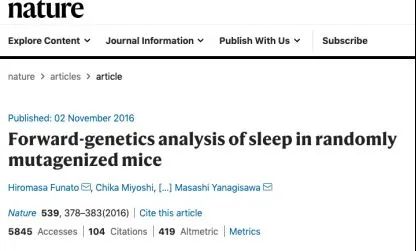 Using a forward genetics approach, the researchers first screened a line of lethargic mice that were awake for only 8.7 hours a day, far less than the awake time of normal mice (about 13 hours a day). Hour).

So, what is the gene corresponding to sleepiness? By mapping, the researchers found that a mutation in an intron of a kinase gene called Sik3 was responsible for the phenotype in the lethargic family mice.

The intron itself is not involved in coding the protein, but this mutation of Sik3 at the site recognized by the spliceosome in the intron causes the mRNA splicing error of Sik3, which eventually leads to the deletion of a segment of the Sik3 protein.

In order to verify that the deletion of this segment of the Sik3 protein is the main cause of lethargy in mice, the researchers used gene editing to create a deletion of the Sik3 gene in normal mice, and found that the phenotype was the same as that of lethargic mice, thus proving that their assumptions.

Researchers from the University of California, San Francisco also reported an “early sleep gene” in 2007.

They found that a mutated “clock” gene that enables some people to go to bed early and wake up early leads to a condition called familial advanced sleep phase syndrome (FASPS). The study, published in the January 12, 2007, issue of Cell, is titled Modeling of a Human Circadian Mutation Yields Insights into Clock Regulation by PER2.

By studying mice carrying the human FASPS gene, the researchers found that the mutated Period 2 (Per2) clock gene, which is essential for resetting the body’s central clock in response to light, cannot be modified by another enzyme that controls it.

This runaway results in a reduction in the copy number of Per2 signaling and changes in sleep patterns. The evidence may help reveal how these people’s natural body clocks are set to such an early-wake schedule.

Some people are used to napping during the day, and some people can’t fall asleep during the day. How long a person sleeps during the day is partly controlled by their genes, according to a study led by researchers at Massachusetts General Hospital (MGH) . 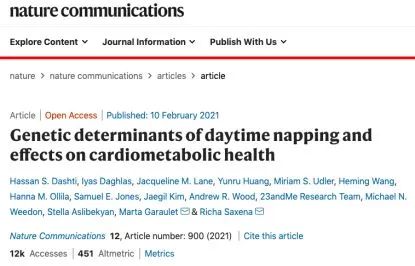 The team has previously identified genes associated with sleep duration, insomnia, and a tendency to wake up early or “night owls.” To understand the genetic mechanisms of daytime naps, the researchers conducted a genome-wide association study (GWAS).

In the largest study to date, the MGH team, in collaboration with institutions such as the University of Murcia in Spain, identified dozens of genetic regions that control the tendency to nap during the day. They also found preliminary evidence that napping habits are associated with cardiometabolic health.

Digging deeper into the data, the team identified at least three potential mechanisms that promote naps: sleep propensity, where some people need more sleep than others; and sleep disruption, where daytime naps can help make up for poor sleep quality the night before. ; Early risers, i.e. early risers may take naps to make up for their sleep.

The study was published in the journal Nature Communications in February 2021 under the title Genetic determinants of daytime napping and effects on cardiometabolic health.

People often like to use words such as “self-discipline” and “lazy” to evaluate people with different sleep habits, and now, more and more scientific studies tell us that different sleep patterns may be determined by genes, so such evaluations Maybe not fair. In any case, we should respect differences and needs, no matter how you sleep, getting enough and efficient sleep, and giving your body and brain a good rest is the king!

How can you stay energized with only 4 hours of sleep per night?