JAMA·Oncology: Is radiotherapy followed by immunotherapy safe or not?

JAMA·Oncology: Is radiotherapy followed by immunotherapy safe or not? The largest study to date makes it clear

Radiotherapy, surgery, and drug therapy are the three basic treatments for malignant tumors.

It is estimated that approximately 50 percent of patients with malignancies may require radiation therapy [1].

In recent years, with the gradual rise of immunotherapy represented by immune checkpoint inhibitors (ICI), more and more patients may receive ICI and radiotherapy simultaneously or sequentially [2].

ICI has been approved for the treatment of various malignant tumors, and its immune-related adverse reactions have some characteristics different from those of traditional chemotherapy, mainly involving the lung, liver, thyroid, gastrointestinal tract and other organs [3]. Radiation therapy may also cause immune-related adverse reactions in patients.

Therefore, the medical community has long been concerned that patients may experience serious immune-related adverse reactions when they receive combined radiotherapy and ICI therapy .

Recently, FDA expert Chana Weinstock and her team conducted the largest retrospective analysis to date on the safety of radiotherapy combined with ICI therapy . The findings were published in the journal JAMA Oncology [4] .

Therefore, the researchers believe that receiving ICI within 90 days after radiotherapy did not increase the incidence of serious adverse reactions, and radiotherapy followed by immunotherapy should be relatively safe .

Next, let’s take a look at how this research is carried out.

More than 56% of patients were younger than 65 years, 62% were male, 79% were white, and 40% were from the United States. The main types of cancer are: lung cancer, melanoma, kidney cancer, head and neck cancer, bladder cancer. 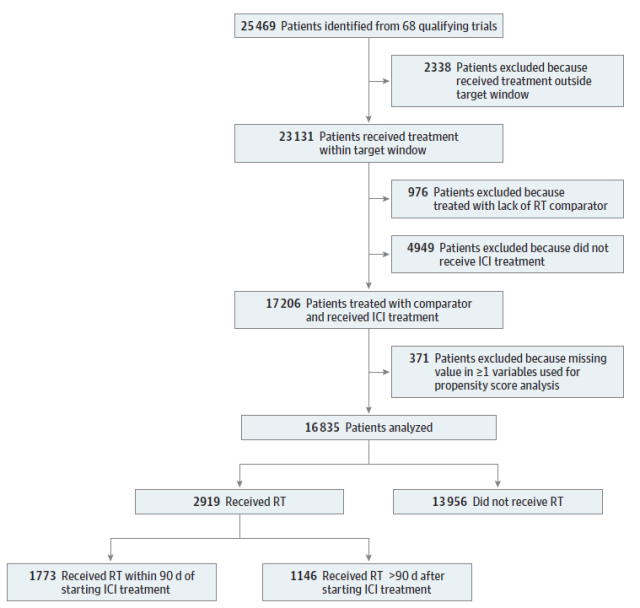 ▲ Flowchart of patient intake and discharge

If the patients were divided into those who received ICI alone and those who received radiotherapy plus ICI, the researchers found that the spectrum of AEs in the two groups(mainly neutropenia, thrombocytopenia, pneumonia, colitis, endocrinopathy, fatigue, diarrhea, etc.)are similar .

In order to reduce potential selection bias, the study carried out propensity score matching according to the basic conditions of patients, such as age and gender.

The incidence of colitis was slightly higher (2.5% vs 1.9%) compared to the non-RT group with RT > 90, with the main difference being grade 1 and 2 adverse events. 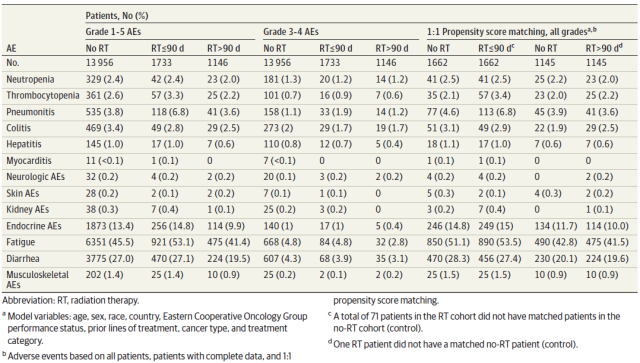 ▲ The occurrence of adverse reactions in each group of people

The study concluded that although patients received ICI within 90 days of radiotherapy, the incidence of pneumonia, thrombocytopenia, kidney-related adverse reactions, and fatigue increased, and the incidence of pneumonia increased after ICI therapy 90 days after radiotherapy. increased, but the magnitude of the increase was very small, and the adverse reactions that differed were all low-grade.

Therefore, it can be considered that immunotherapy combined with ICI did not significantly increase the occurrence of adverse reactions .

JAMA·Oncology: Is radiotherapy followed by immunotherapy safe or not?