NEJM: A comprehensive look at the effects of intermittent fasting

NEJM: A comprehensive look at the effects of intermittent fasting on health, aging, and diseases.

Professor Mark Mattson of Johns Hopkins University and others published a review research paper in NEJM , pointing out that intermittent fasting is beneficial to human health and can prevent and improve obesity, diabetes, cardiovascular disease, inflammatory diseases and brain diseases. Cognitive impairment.

With the development of society and economy, the quality of life is steadily rising, and the health and longevity of human beings have also increased significantly.

At present, health concepts such as exercise, fitness and balanced diet have become a consensus. These scientific health concepts also guide us to actively pursue a healthy lifestyle.

Interestingly, the act of fasting is not a healthy lifestyle, but it has been highly sought after. In recent years, a growing body of scientific research has shown that short-term fasting can improve the treatment of certain diseases, such as diabetes, cancer chemotherapy and immunotherapy.

Not only that, fasting is also an effective way to treat obesity. Obesity is now a global epidemic, and obesity rates are on the rise around the world, including China. To combat metabolic functions such as obesity, many dietary interventions have been tested, the most popular of which is Intermittent Fasting (IF) .

On December 26, 2019, Professor Mark Mattson of Johns Hopkins University and others published a paper entitled: Effects of Intermittent Fasting on Health, Aging, and Disease in the New England Journal of Medicine (NEJM) . A review article on the effects of fasting on health, aging and disease) .

Fasting strategies can be broadly divided into two categories: one is restricted food intake , that is, reducing the amount of food per meal or eating only within a limited time each day; the second is intermittent fasting , that is, alternating fasting and eating, such as 5: 2 Intermittent fasting, which means limiting yourself to one moderately sized meal two days a week.

In fact, during human evolution, it is very common to eat one meal less. Therefore, intermittent fasting is a relatively simpler and easier strategy to implement in clinical trials, which also makes intermittent fasting an attractive option for combating metabolic diseases.

In humans and rodents, fasting has been shown to reduce insulin levels, improve glucose tolerance, and lower blood cholesterol levels , even though fasting people do not lose weight.

In addition, studies have shown that adipose tissue plays a central role in regulating the acute fasting response. During fasting, adipose tissue activates corresponding signaling pathways to promote lipolysis by secreting hormones such as leptin. 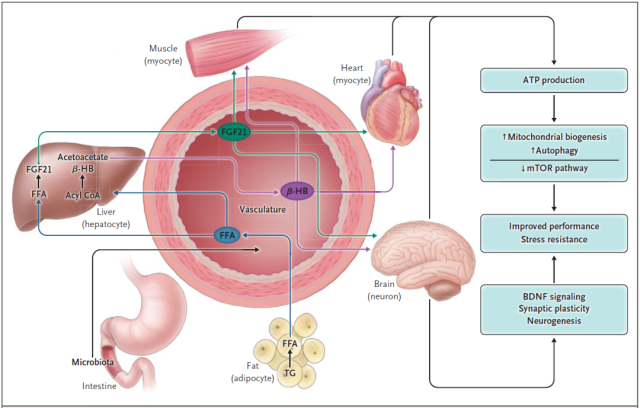 Metabolic adaptations of the human body to intermittent fasting

In his review, Prof. Mark Mattson pointed out that a series of animal and some human studies have shown that alternating fasting and feeding times is beneficial to cellular health, possibly by triggering an ancient adaptation to periods of food scarcity known as metabolic switching.

This switch occurs when cells run out of quickly available sugar-based fuels and begin converting fat into energy with a slower metabolic process.

These reactions enable cells to remove oxidatively damaged proteins and mitochondria and recycle undamaged molecular components. However, for those who overeat or are sedentary, none of these pathways are exploited. 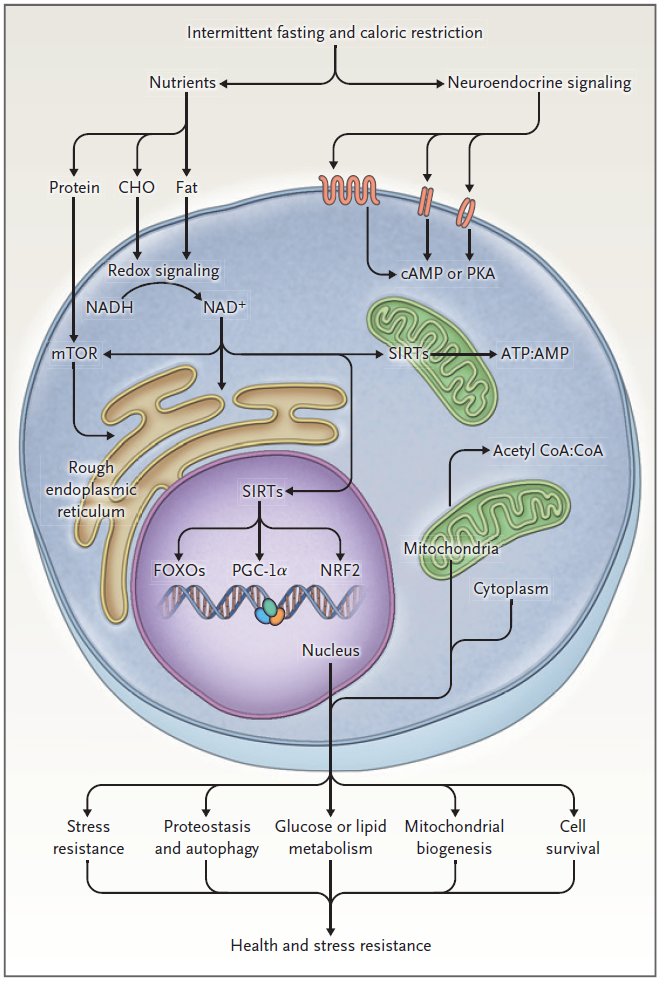 Professor Mark Mattson said: “This switch can improve blood sugar regulation, increase resistance to stress, and suppress inflammation. However, many people, whose diets typically consist of three meals and a snack, do not experience this switch and therefore cannot experience pauses. The benefits of sexual fasting.”

Two studies of 100 overweight women at the University of South Manchester Hospital showed that women on a 5:2 intermittent fasting diet lost the same amount of weight as women on calorie restriction, but showed increased levels of insulin sensitivity and abdominal fat loss. The upper-fasted group performed better than the calorie-restricted group.

In addition to this, preliminary research has shown that intermittent fasting is also beneficial for brain health . In April 2019, a multicenter clinical trial at the University of Toronto, Canada, found that 220 healthy, non-obese adults who remained on a calorie-restricted diet for two years showed signs of improved memory in a battery of cognitive tests . 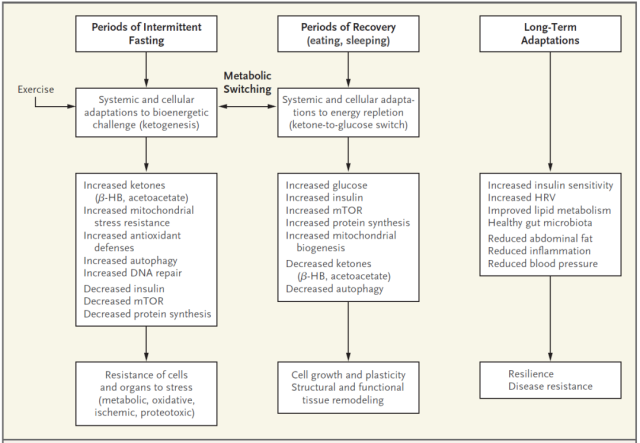 While more research needs to be done to prove the effects of intermittent fasting on learning and memory, Professor Mark Mattson said that if further evidence is found, fasting, or a drug that can have a similar effect, could potentially be used to prevent Prevention and treatment of diseases such as neurodegeneration and Alzheimer’s disease.

How to promote an intermittent fasting lifestyle?

He says there is enough research to demonstrate the potential benefits of intermittent eating in humans, and many doctors are being asked by patients whether and how intermittent fasting should be done.

It takes a while for the patient’s body to adjust to intermittent fasting and to shake off the initial hunger and the restlessness that comes with it.

At the same time, patients should be informed that it is common to feel hungry and irritable initially, and usually disappear after two weeks to a month as the body and brain adjust to the new habit .

To overcome this hurdle, Professor Mark Mattson proposes having doctors recommend that patients gradually increase the duration and frequency of fasting periods over a period of several months , rather than “quit all at once”.

As with all lifestyle changes, it is important for physicians to understand the science so they can communicate potential benefits, harms, and challenges to patients and offer support.

In conclusion, this review article confirms that intermittent fasting has health benefits, not only in preventing and treating obesity, diabetes, cancer, cardiovascular and inflammatory diseases, but also in improving cognitive performance in the brain, Prevent stroke, Alzheimer’s disease, Parkinson’s disease and more.

NEJM: A comprehensive look at the effects of intermittent fasting on health, aging, and diseases.