Alzheimer’s disease breakthrough: Scientists see the structure of Aβ42 in the human brain for the first time, and find that there are differences between the structure in vivo and in vitro,

So what is the reason? The difference between the molecular and animal models used in drug development and the real pathological state may be the key .

Recently, new progress has been made in the research of Aβ, which brings new hope for AD drug development.

This means that there are new opportunities for the development of Aβ aggregation inhibitors and Aβ diagnostic reagents.

Alzheimer’s disease (AD) is a common neurodegenerative disease, mainly manifested as cognitive impairment and memory impairment, which can be divided into familial and sporadic types.

There are two kinds of filamentous amyloid deposits in the brain of AD patients at the same time, namely Aβ protein plaques and neurofibrillary tangles [2], of which the production of Aβ is crucial to the pathogenesis of AD [3].

In familial AD patients, there are mutations in the Aβ precursor protein APP gene and the presenilin PSEN1 and PSEN2 genes.

APP undergoes two-step cleavage by β-secretase and γ-secretase to form Aβ, of which presenilin is related to γ-secretase. Aβ exists in monomers with different amino acid numbers, mainly including Aβ40 and Aβ42 [4,5].

Further aggregation occurs for both Aβ40 and Aβ42. Due to the presence of hydrophobic amino acids, Aβ monomers aggregate with each other to form oligomers rich in β-sheet structure.

Hydrophobic amino acids between protofilaments or oligomers in amyloid plaques further act to form fibrils(filament), the fibers stack together to form plaques. 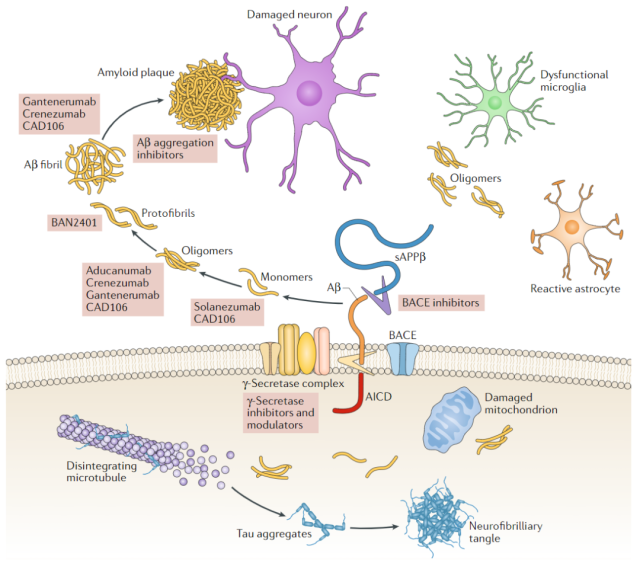 Due to the existence of two hydrophobic amino acids at the C-terminal of Aβ42, Aβ42 is more likely to aggregate than Aβ40, and it is easier to form oligomers [7]. In AD related studies, Aβ oligomers are more associated with neurotoxicity [8], so Aβ42 is more neurotoxic than Aβ40 .

The deposition of Aβ in the brain of AD patients can be mainly divided into three categories: diffuse deposition in the parenchyma, focal deposition and vascular deposition.

Parenchymal deposition occurs in different brain regions, and cryo-EM has provided the structure of Aβ40 aggregates in lymphatic vessels from AD patients [9], whereas scattered plaques and filaments outside the dense nucleus are predominantly Aβ42 (although Aβ40 produced more) , but its structure has not yet been elucidated.

The researchers extracted the filamentous structure of Aβ42 from 10 autopsy samples. Among the 10 samples, there were 5 AD patients, of which 3 were sporadic and 2 were familial; 5 other patients were 1 case of Tau astrocytosis (ARTAG), 1 case of Parkinson’s dementia (PDD), 1 case of Dementia with Lewy bodies (DLB), 1 patient with frontotemporal dementia (FTD), and 1 patient with pathological aging (PA ).

The secondary structure of the protofilament consists of five beta strands with an S-shaped region. Folds around two hydrophobic clusters.

In familial AD patients, type II filaments are observed with smaller protofilament interfaces that are mainly stabilized by electrostatic interactions. Different from the structure of Aβ in lymphatic vessels of AD patients, both type I and type II have left-handed twist.

In contrast to in vitro assembled Aβ42, although they all contain protofilaments with one or two S-shaped regions similar to type I or II, they differ in side chain orientation and inter-protofilament assembly.

Aggregation in vitro is crucial for studying the molecular mechanisms of amyloid formation. However, existing assembly methods for recombinant tau and alpha-synuclein yield filament structures that differ from those extracted from the human brain.

The same seems to be the case with Aβ42 filaments, which only partially reproduce the structure in the human brain, with some differences from the real structure. 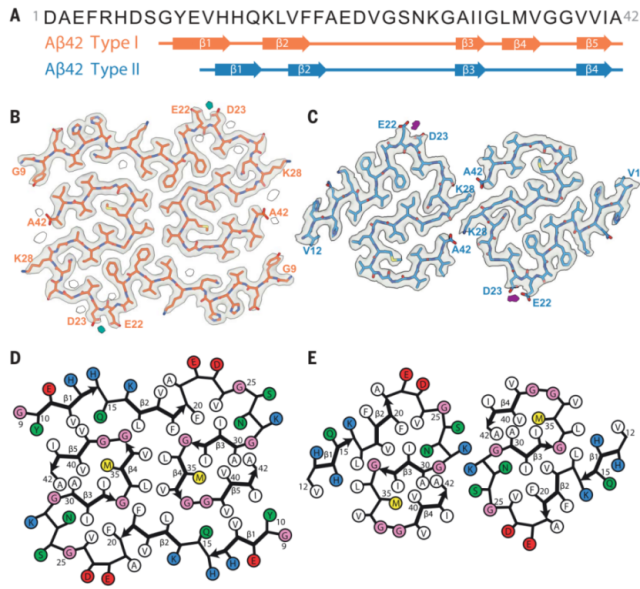 Animal models provide another tool for studying the molecular mechanisms of Alzheimer’s disease.

The mice exhibited massive deposition of human Aβ42, neuroinflammation, and memory impairment in the brain without the need for overexpression of APP.

To further investigate the relevance of this mouse model to human disease, the researchers determined the cryo-EM structure of Aβ42 filaments from the brains of 18-month-old isotype AppNL-F mice, which is similar to that found in the brains of familial AD patients. Aβ filaments are structurally similar. 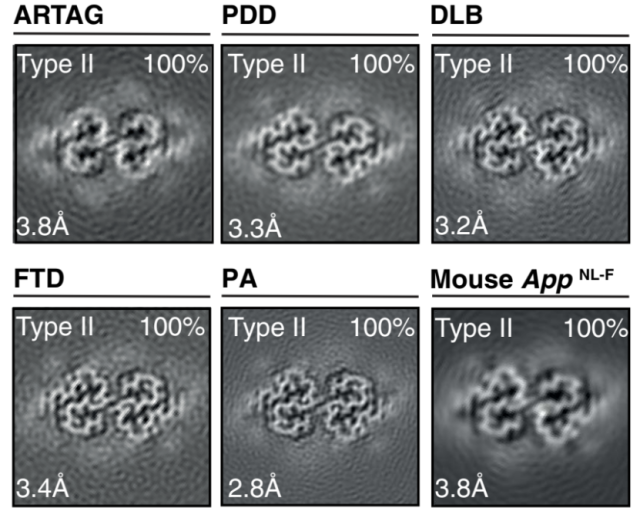 The structure of Aβ42 filaments in the brain differs from those assembled in vitro. In contrast, in AppNL-F knock-in mice, Aβ42 deposits are composed of type II filaments.

Through the above studies, it can be found that: 1. The in vitro assembly cannot simulate the in vivo environment, and some conditions necessary for in vivo assembly may be lacking; 2. The familial type, that is, the type with APP or PS mutation, will have type II filaments, regardless of AD This is true both in patients and in AD transgenic mice; 3.

Will most of the type I filaments in the brains of sporadic AD patients also correspond to the common features of sporadic AD that we have not found yet? Scientists still need to study further.