Cell: Analyze the latest portrait of HIV virus to promote the development of AIDS vaccine.

HIV can erode and destroy the human immune system, thereby causing various related diseases. Until now, there is still no vaccine or specific medicine for AIDS.

Therefore, AIDS is also known as an “incurable disease”. Once infected with “AIDS”, it cannot be cured. So far, only a few people in the world have been cured.

According to UNAIDS, about 38 million people worldwide will be infected with HIV in 2020.

The National Health Commission of China pointed out that there are about 80,000 new cases of AIDS in China every year, and the number of infected young students and the elderly is increasing year by year.

From this point of view, the AIDS epidemic situation in the world is not optimistic.

Therefore, it is very urgent and important to explore the structural characteristics of HIV virus and develop vaccines and new treatment methods accordingly.

Recently, researchers from the University of Washington and the Scripps Institute published a research paper in the journal Cell entitled: Cryo-ETof Env on intact HIV virions reveals structural variation and positioning on the Gag lattice .

The study uncovered new details about the human immunodeficiency virus (HIV) using powerful tools and techniques developed in the field of structural biology .

The findings have brought scientists closer to the basic structure above and below the surface of the virus, which may help design and develop a vaccine to prevent AIDS. 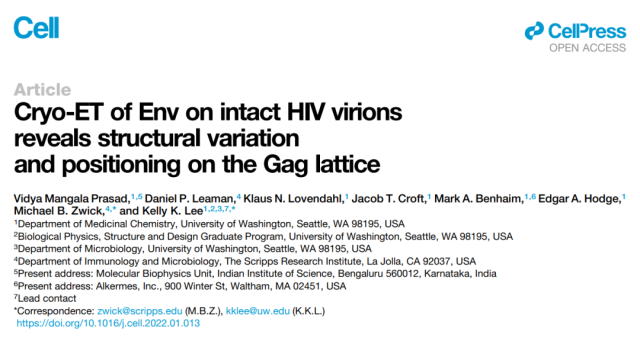 The envelope glycoprotein (Env) on the surface of HIV-1 virus is an important viral entry protein machinery that mediates binding to host cell receptors and subsequent membrane fusion.

Env is translated as a precursor of gp160 protein, trimerized and cleaved into gp120 and gp41 subunits, which are responsible for receptor binding and fusion, respectively.

More importantly, as the sole target of neutralizing antibodies, Env is also uniquely important to vaccine design efforts . Recent in-depth studies of Env structure have largely come from studies of engineered, truncated forms of the trimeric outer domain, while the details of Env structure in its viral membrane environment, including its organization relative to other viral components, remain unclear. 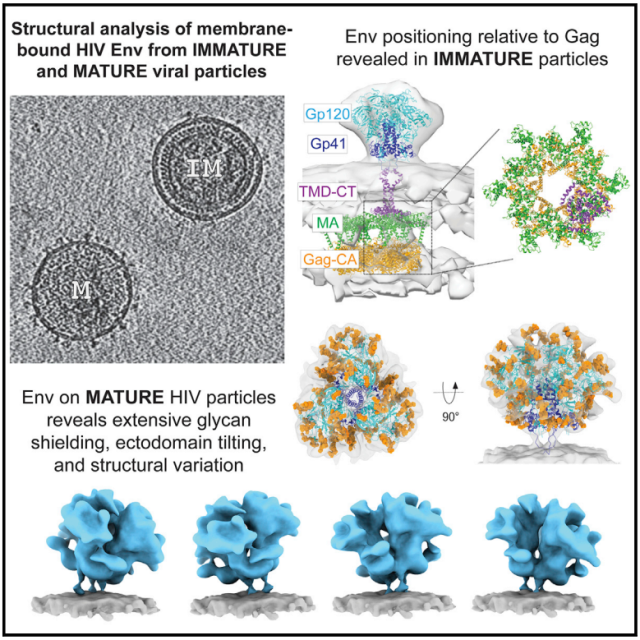 To understand how Env is assembled on virions and how it differs structurally from soluble trimers, the research team studied immature and mature Gag-bearing HIV-1 virus-like particles (VLPs) on The envelope glycoproteins were subjected to cryo-electron tomography (cryo-ET) , and subchromatographic averaging and structural mass spectrometry were performed.

These detailed findings include the location and 3D view of the structure of the viral envelope “spike” protein throughout the virus. In another key advance, scientists have gained new insights into the HIV-1 virus’s glycan barrier (a sugar chain structure on a protein that evades attack by the body’s immune system) .

“We ‘re looking at the entire virus particle, and how the proteins on the surface are connected to the rest of the virus, and by looking at the intact virus structure, we can see this ‘ How the different sides of the virus’ face are displayed and how they are recognized or hidden by the immune system.”

Localization of hVLP-Env on the immature Gag lattice

This complete portrait of the HIV-1 virus structure also gave scientists new insights into the localization of the envelope spike protein on the virus’s surface.

The discovery overturns previous models of how the HIV-1 virus parts assemble and helps researchers focus on interactions where the two proteins might dock.

This interaction needs to be resolved in more detail, but at least the current work provides a correct architectural model of HIV-1 viral assembly.

Another previously unobserved finding is that the “stalk” that supports the envelope protein is flexible and can be tilted, presenting both an opportunity and a challenge for the immune system’s neutralizing antibodies that protect cells from infection.

At the same time, these discoveries will drive the design and development of HIV vaccines—and as we become more aware of what the target is, it will spur innovation that could ultimately lead to a vaccine.

In fact, targeting the HIV virus’ envelope as a vaccine development target has been particularly difficult because the virus has few spike proteins and camouflages them with sugar molecules to evade the body’s immune system. All of these features increase the dynamic variability that HIV spike proteins present to the immune system. 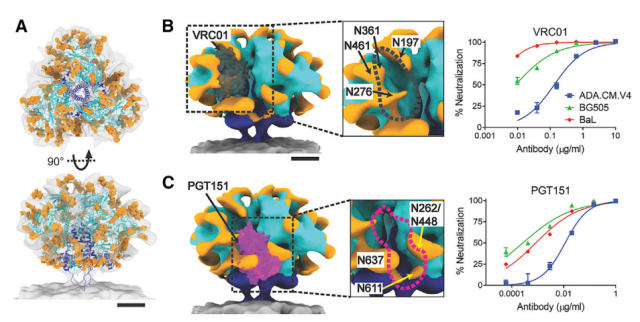 Kelly Lee said: “This is a problem that HIV vaccine developers have struggled with from the beginning – the HIV virus mutates at a very rapid rate. Every time it infects a new individual, it will eventually produce thousands in that individual. There are different variants, and if you look at them in large populations, they mutate even more.”

In fact, just this February, a more deadly strain of HIV was discovered in the Netherlands (detail: a more severe, faster-spreading mutant strain of HIV has emerged ) Fortunately, although the strain is a “highly deadly new variant”, but it still responds to existing HIV treatment regimens.

Michael Zwick , co-corresponding author of the study, said: “The emergence of more deadly HIV mutants is another reminder that the HIV virus is always changing, so scientists need to continue to study.”