The CRISPR-Cas9 gene editing technology targets the Cas9 enzyme to the target DNA sequence through the guide RNA (gRNA ) . to achieve gene knockout.

However, CRISPR-Cas9 has serious off-target effects , which may cut DNA double-strands at misplaced gene sites, resulting in potential risks, which is also a major factor limiting the clinical application of CRISPR-Cas9 gene editing.

At present, a number of clinical trials based on CRISPR-Cas9 gene editing have been carried out at home and abroad , and reducing its off-target effect is an urgent problem to be solved.

On March 2, 2022, a research team from the University of Texas at Austin published in the journal Nature :  Structural basis for mismatch surveillance by CRISPR–Cas9 .

The research team first discovered the structural mechanism behind the off-target in the CRISPR-Cas9 gene editing system, and on this basis redesigned the Cas9 protein – SuperFi-Cas9 , which reduced the off-target probability by thousands of times, and the editing efficiency was the same as the original version of Cas9 protein is the same.

The research team used cryo-electron microscopy to observe the structural changes of Cas9 when it interacts with mismatched DNA sequences , so as to analyze the activation mechanism of Cas9 during mismatches.

The research team was surprised to find that when the guide RNA (gRNA) was mismatched at bases 18-20 , the pairing structure was looser at this time, but the Cas9 enzyme did not give up, but grasped through a finger-like structure.

The mismatched region lives, thereby stabilizing the RNA-DNA duplex so that it behaves like a correct pairing, paving the way for Cas9 to cut the DNA. Jack Bravo , the paper’s first author , said the situation was like a chair where one of the legs was broken and taped on, and it still worked as a chair, but wobbled a bit.

As the saying goes, seeing is believing. David Taylor , the corresponding author of the paper, said: If I hadn’t seen the finger-like structure of Cas9 when the guide RNA (gRNA) was mismatched by cryo-electron microscopy , we would never have thought in my mind that Cas9 is. Through this mechanism, the structural stability upon mismatch is increased, resulting in off-target effects.

Based on this groundbreaking discovery and insight, the research team redesigned the Cas9 enzyme. This new version of the Cas9 enzyme, SuperFi-Cas9 , has its finger-like structure partially modified to be away from the DNA, so that in the event of a mismatch, it does not It is used to stabilize the mismatched structure, so the Cas9 enzyme can no longer cut and edit the DNA sequence at the mismatched site. 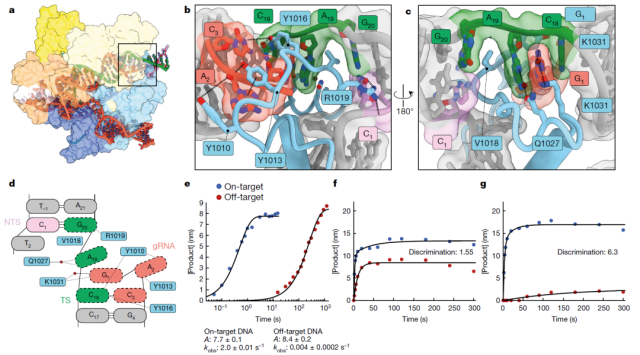 More importantly, the redesigned SuperFi-Cas9 can edit DNA as efficiently as the natural Cas9 enzyme, but the off-target probability is reduced by about 4000 times, so the safety has been greatly improved.

There have been other labs redesigning Cas9 to reduce its off-target effects, but all of these versions of Cas9 improve accuracy by sacrificing gene editing efficiency.

For this situation, Jack Bravo , the first author of the Nature paper, made a vivid analogy: Different versions of Cas9 developed by different laboratories are like different models of self-driving cars, most of which are safe, but their maximum speed Only 10 mph, and while safety has improved, practicality has gone. SuperFi-Cas9 is a self-driving car that can drive at full speed and is very safe.

The probability of missing a target of SuperFi-Cas9 is 4,000 times lower than that of the original version of Cas9, and the editing efficiency is just as high.

At present, the research team has demonstrated the editing of DNA by SuperFi-Cas9 in test tubes, and experiments in living cells are underway, and they are also simultaneously developing a new version of Cas9 that is safer and more efficient.

It is reported that the research team has applied for a patent for this technology, and the Technology Commercialization Office of the University of Texas at Austin is also looking for partners to help this technology achieve translational applications.

In addition to the possible off-target effects of CRISPR-Cas9 gene editing technology, the large size of the Cas9 enzyme itself is also a major problem that limits its wider application. In recent years, many labs have focused on developing Cas9 enzymes with smaller sizes for better delivery.

For example, the team of Qi Lei from Stanford University published a paper in the Molecular Cell journal in September 2021 [2] , redesigning a new mini CRISPR system – CasMINI , which is like a ” Swiss Army Knife “, small and exquisite but with many functions. It is easier to deliver into mammalian cells, so it can be better applied to the clinical treatment of CRISPR gene editing .

The company raised $195 million in new financing in September 2021 at a valuation of over $1 billion.