Nature: Summary of achievements in antitumor drug research and development in the past decade.

Oncology drugs are the top drugs in the prescription drug market by total sales, and these sales have grown steadily over the past decade.

The main reasons for this phenomenon are the increase in patients and the continuous innovation of pharmaceutical companies.

This article mainly analyzes the changing trends of the oncology drug market in the past ten years through the drug sales data of Global Data .

By aggregating the drug sales reported by all companies over a 10-year period, it is evident that Roche surpassed all competing companies in sales between 2010 and 2019, generating a total of $252 billion in sales (Figure 1a) .

Celgene and Novartis followed with sales of just over $80 billion each.

Bristol-Myers Squibb (BMS) and Merck & Co. were fourth and fifth with sales of $55 billion and $50 billion, respectively.

Interestingly, even after the Bristol-Myers-Singapore merger closes in 2019, the two companies’ combined sales will still be lower than Roche’s combined.

The remaining companies — Johnson & Johnson , AstraZeneca , Pfizer , Eli Lilly and Takeda , among others — each reported less than $50 billion in combined sales during the analysis period.

All three pioneer products were developed by Genentech , which was wholly acquired by Roche in 2009.

These three drugs have dominated sales over the past decade, while Roche has developed new oncology drugs to bolster its revenue.

An assessment of the remaining companies’ oncology investments shows that the company’s high revenue is independent of the number of drugs.

Instead, it’s about sales of a handful of blockbuster drugs. For example, Celgene generates most of its sales from lenalidomide, Novartis from imatinib and nilotinib, and Bristol-Myers Squibb (BMS) from nivolumab.

Figure 1b. Roche’s individual drug sales breakdown for the period 2010-2019

3. Blockbuster drug sales are far ahead

This is the case, for example, with drugs like Merck ‘s Keytruda (pembrolizumab) , Celgene/BMS’s Revlimid, and BMS’s Opdivo, all of which generated $7 billion or more in 2019. 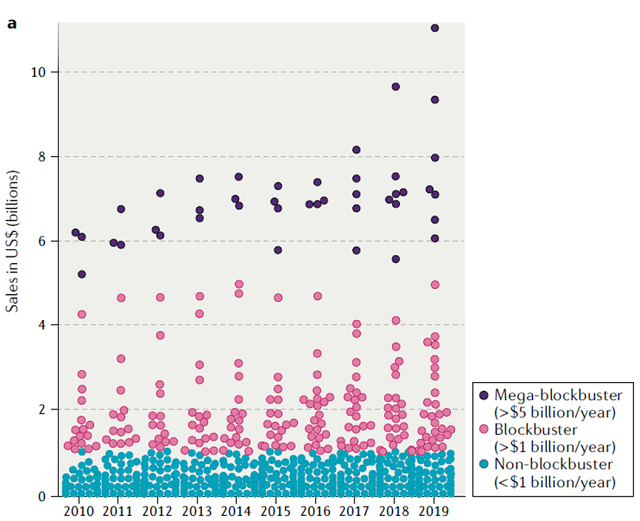 To illustrate the research progress of anticancer drugs in the past decade, you can refer to the income of a single drug in a class of drugs.

Figure 2 illustrates the total revenue for each drug category over the past decade.

Between 2010 and 2019, as the role of precision medicine in the clinic grew, so did the role of targeted therapies—especially small-molecule kinase inhibitors and monoclonal antibodies (excluding immune checkpoint inhibitors) .

Conversely, chemotherapy drug sales have declined as patent protection on older products expired or some of their uses were replaced by newer drugs such as targeted therapies.

Between 2010-2019, the market share of chemotherapy decreased by 17% (equivalent to $3.9 billion) , and the market for targeted therapy (including kinase inhibitors, targeted monoclonal antibodies, excluding checkpoint inhibitors and other targeted drugs) market Shares increased by a total of $56 billion.

Revenues from targeted therapies have grown substantially over the past decade.

The introduction of immune checkpoint inhibitors into tumor therapy is arguably one of the biggest factors revolutionizing the field of oncology over the past decade.

Since the first checkpoint inhibitor was approved in 2011, sales of such drugs, such as PD-1/PD-L1 inhibitors Keytruda and Opdivo, have grown to $25 billion.

The enormous efforts made by biotech and pharmaceutical companies in cancer treatment have yielded remarkable results.

The development and marketing of some key drugs is critical to the success of investment in the oncology sector, and the sales of one or a portion of the blockbuster drugs have helped some companies to occupy a place in the top 10 positions in the oncology field.

Between 2010 and 2019, the rise of immune checkpoint inhibitors and the integration of targeted kinase inhibitors and monoclonal antibodies constituted the main income for the oncology investment segment.

After 2010, a significant portion of the revenue for these classes of drugs came from blockbuster drugs protected by patents. Mainly include Merck’s Keytruda, BMS’s Opdivo, Pfizer’s Ibrance, AbbVie and Johnson & Johnson’s Imbruvica.

For old blockbusters like Avastin, Rituximab and Herceptin, biosimilar competition has begun and will lead to new market competition.

In the future, companies may look to expand key indications for leading drugs, including identifying subgroups of responsive patients based on biomarkers rather than the tissue of origin of the cancer.

The increasing understanding of tumors and the improvement of clinical methods to detect and locate key carcinogens will facilitate the elucidation of new targets.

As innovation develops, we expect the market for oncology drugs to expand further.