Under the COVID-19 epidemic, hand cleaning and disinfection after touching objects has become the norm. 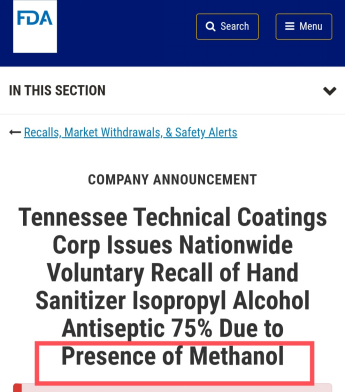 Normally, the main ingredient in these disinfectants should be isopropyl alcohol, which can be used to reduce the number of microbes on the skin without soap and water.

Using isopropyl alcohol as a disinfectant should be a common practice in the United States, but the recalled disinfectant needed was found to contain methanol after FDA testing. 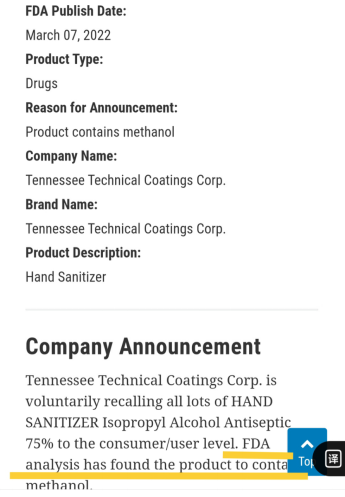 In our knowledge, methanol is a common component in counterfeit wine, which can cause blindness and even death in severe cases.  In this announcement, the FDA also mentioned poisoning after drinking. 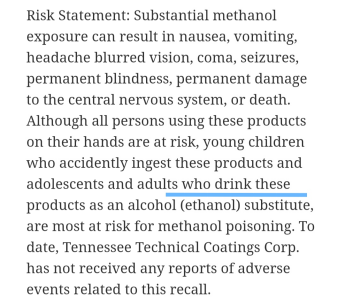 Don’t be confused when you see this, we are talking about disinfectants, for external use.

But it is also necessary to take into account that the control of alcohol on the American side should be stricter. And it is also said that they use isopropyl alcohol as a component because ethanol may be used as a disinfectant to increase the risk of oral intake.

But even isopropyl alcohol may not stop teens or adults who can’t buy alcohol or can’t afford it, and they might use sanitizer as an alternative to alcohol. In this way, the presence of methanol can really kill people, because after changing the intended use, oral poisoning is the biggest risk in this matter. 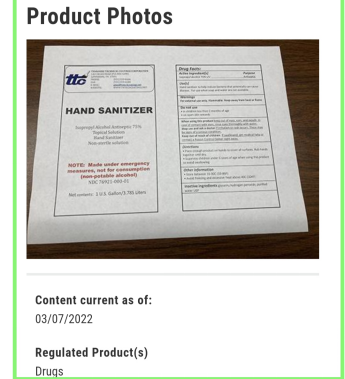 In fact, in addition to oral administration through the digestive tract, methanol is also poisoned through skin absorption, and can also be absorbed through the respiratory tract.

The poison of this methanol component is possible as long as it comes into contact with it, and it is reasonable for the FDA and the company to actively recall it

. So the question is, where did the methanol come from? Is the raw material impure, mixed with isopropanol? Or was it wrongly fed and accidentally added methanol?

This is actually not too difficult. Under normal circumstances, there are reserved samples for each batch of raw materials.

This is to ensure that in the event of a problem, the root cause can be quickly found. For volatile raw materials, you can leave a small bottle unopened. For the kind of large pieces that are easily 50 kg, it may not be possible to keep them like this.

Then, keep the samples after sampling and testing. Anyway, at least they should be kept until the expiration date. This method does not guarantee that all raw material problems are detected.

For example, occasionally, there are screw caps left in the raw materials, and there may not be screw caps in the barrel you sample. But for the kind of mixed contamination, especially liquid, this method is very practical.

After all, its pollution is also uniform. Now check the original isopropyl alcohol sample, it should be able to eliminate some troubles.

Similarly, see if the company uses methanol, and if so, compare the physical and ledger quantities, and you can also find out whether there is any wrong feeding. These are all based on the normal operation of the quality system of the enterprise. If the quality system itself is a mere formality, it is difficult to find out the truth.

The sulfa elixirs incident in the United States in 1937 was an intentional substitution because diethylene glycol replaced ethanol as a solvent; the 2021 Japanese beriberi medicine contained sleeping pills, which was caused by wrong feeding.

Errors for different reasons can have the same consequences, but very different approaches to solving the problem.

Probably the company will also conduct a major internal investigation in order to solve the problem. After all, if human life occurs because of the disinfectant, no one can afford that kind of impact.