From infectious diseases to cancer to a variety of rare diseases, mRNA is showing potential therapeutic value in a variety of diseases.

However, mRNA molecules are unstable and easily degraded, and usually require modifications such as capping, tailing, modification and substitution of mRNA natural bases.

For example, the mRNA molecules in the two officially launched new coronavirus mRNA vaccines have been specially modified to varying degrees.

How effective are these special modifications? It is also a problem that scientists need to study and solve in depth. Accurate and quantitative identification of mRNA modification sites and modification methods is the premise for in-depth analysis of mRNA modification functions and mechanisms, and also provides a new direction for improving mRNA stability and efficiency.

Researchers at the University of Cologne in Germany have proposed a strategy for double chemical modification of mRNA and assessed the effect of these modifications on mRNA function.

In the study, the team introduced a third base pair during mRNA transcription, introducing unnatural nucleotides into specific sites, while combining with natural mRNA modification methods.

Studies have found that double chemically modified mRNA can form a synergistic effect to improve the stability, efficiency and protein expression of mRNA.

This team used this method to label mRNA, and further studied the effect of introducing artificially modifiable nucleotides on the efficiency and stability of mRNA.

“We investigated the stability of this chemically modified mRNA in cells, whether synthetic mRNA can be used as a template for efficient protein production in cells, and the effect of chemical modification on translation into protein”, corresponding author Stephanie Kath “The findings show that this new method is very effective for monitoring the entry of mRNA into cells, monitoring and influencing its spread at the cellular level and the efficiency with which messages are transcribed ,” said Professor Schorr .

The research results have been accepted by the journal Chemical Science and will be officially published in the near future.

According to the research team, this approach promises to open up new possibilities for developing more effective mRNA therapies .

At present, there are a variety of modification techniques that can be used to generate more stable mRNA, which can be roughly divided into three categories: replacing natural ribonucleic acid with artificially synthesized non-natural ribonucleic acid to synthesize mRNA; adding 5′ caps, 3′ poly (A) “tail” and UTR (untranslated region) sequences; and the use of special novel formulation technology to effectively protect mRNA.

After research and industrial application, this method can reduce the inherent immunogenicity and instability of mRNA. For example, both Moderna and BioNTech’s mRNA vaccines use pseudouracil modifications to maintain mRNA stability.

As mRNA therapy continues to gain momentum, academia and industry have been looking for more modifications that can improve mRNA efficiency and stability. In-depth analysis of the functional effects of these modifications on mRNA is an important basis for controlling mRNA structure, improving its stability and translation activity.

To further study the effect of these chemical modifications on mRNA, Stephanie Kath-Schorr’s team proposed the idea of ​​combining site-specific insertion of synthetic nucleotides with natural base modifications .

In their experiments, they inserted synthetic nucleotides at the 3′-UTR by introducing a third base pair during the enzymatic transcription of DNA to RNA, incorporating both Ψ and 5mC (methylated modification). ) , and designed a series of experiments to observe, quantify and verify the function of mRNA.

It is important to note that the introduction of synthetic nucleotides via Genetic alphabet expansion transcription (GENAEXT) builds on previous work by the respective teams of Ichiro Hirao and Floyd Romesberg, who in 2018 Published research points out that unnatural base pairs can be transcribed with high precision and high efficiency.

In the study, the University of Cologne team synthesized functionalized and protein-coding GENAEXT mRNA for the first time in vitro, which included CP modification and could encode the red fluorescent reporter protein mCherry .

Specifically, it included the insertion of cyclopropene (CP) into the 3′-UTR region , the Ψ and 5mC modifications to the mRNA to improve its activity, and the introduction of 5′ cap and 3′ tail modifications.

Next, the modified mRNA was transfected into mammalian cells via liposomes, and the mRNA levels and mCherry reporter expression were analyzed by reverse transcription quantitative PCR (RT-qPCR) and compared with CP-modified GENAEXT Translation efficiency of mRNA versus unmodified mRNA. 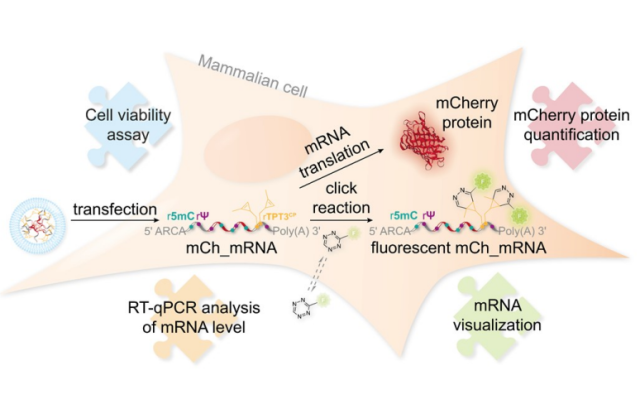 Figure | Tracking and functional analysis of GENAEXT mRNA in cells

The data show that the intracellular translation of mRNA that has undergone a dual chemical modification method (natural base modification and insertion of CP unnatural base pairs) can produce a synergistic effect, and this synthetic mRNA can increase protein expression and improve transfection. effectiveness.

After iEDDA of the synthesized mRNA with a tetrazine-fluorophore derivative, researchers can visualize the mRNA in living cells by confocal fluorescence microscopy, while also tracking the mRNA in time and space.

In fact, there are many difficulties in the process from mRNA sequence entering cells to guiding cells to secrete proteins, including being hydrolyzed into small nucleotide molecules by ubiquitous RNases before entering cells; stable expression, etc.

At the same time, by introducing synthetic non-natural nucleotides into specific mRNA fragments The feasibility of modifying mRNA has been demonstrated. In this study, the team combined the two methods to achieve improved protein synthesis efficiency and transfection efficiency.

Therefore, the research team believes that the results of their experiments show that the use of the GENAEXT method will provide new ideas for the study of mRNA modification.

“This approach may open up new possibilities for mRNA modification — fine-tuning the properties of mRNA and efficient delivery of mRNA into cells through a covalent carrier system,” the team pointed out, and they have shown through a series of studies that, in principle, , the GENAEXT method can be applied to mRNA sequences of any length, and the mRNA will be more functionalized by iEDDA click reaction with tetrazine derivatives.

In addition, the team suggests that by introducing artificial regulatory elements in the untranslated regions of mRNAs, the potential to regulate mRNA translation levels may be unlocked .

At the same time, they mentioned that in addition to the ability to attach various reporter groups in cell experiments, this method also has the potential to be applied to protein binding experiments in vitro to identify mRNA-binding proteins.

In addition, the method proposed by the team will also provide a new “handle” for detecting the stability and expression efficiency of modified mRNA. At present, scientists have developed a variety of methods in the two directions of quantification and high-throughput.

For the next plan, the research team said they are developing ways to package mRNA more efficiently to better protect mRNA and enable it to enter cells smoothly.