Spider silk enhances the anticancer ability of p53 and is expected to develop a broad-spectrum mRNA cancer vaccine.

p53 is a tumor suppressor gene with broad and powerful functions, and more than half of tumor patients carry p53 gene mutations. Mutations in the p53 gene are important drivers of tumorigenesis, progression, treatment resistance, and poor prognosis.

Since its discovery in 1979, the p53 gene has been a “star molecule” in molecular biology and oncology. Searching the Pubmed database with p53 as the keyword can find more than 100,000 articles. In a 2017 statistic of the journal Nature , the p53 gene ranked first in the list of the most popular research genes in the past few decades by an absolute advantage.

In cells, p53 can repair DNA damage and prevent cells with mutated or damaged DNA from dividing and other functions, thereby preventing the development of cancer. However, p53 is expressed at low levels in the body, and its protein is rapidly broken down in cells, so if p53 levels can be stably increased, new cancer treatments can be developed.

Recently, researchers from Karolinska Institutet in Sweden published a research paper entitled: A “spindle and thread” mechanism unblocks p53 translation by modulating N-terminal disorder in Structure , a sub-journal of Cell .

In this study, the p53 protein was fused to the N-terminal domain of the native highly stable spider silk protein to construct a highly expressed and more structurally stable fusion p53 protein , which has full physiological activity in human cancer cells.

The research team hopes to eventually develop an mRNA cancer vaccine based on this discovery to treat cancers associated with p53 gene mutations. 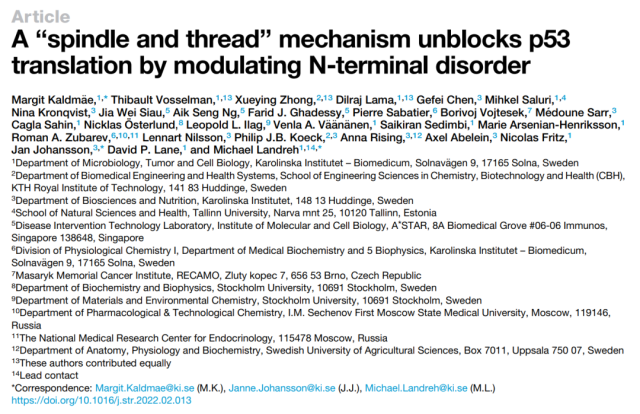 Michael Landreh , corresponding author of the study, said that p53 is a very large and disordered protein, and although powerful, the problem is that only a small amount of p53 protein is expressed in cells and then quickly broken down.

Spider silk is one of the strongest polymeric substances in nature and consists of long chains of highly stable proteins. Inspired by this, the research team tried to use spider silk proteins to stabilize the p53 protein.

The research team fused the p53 protein to the N-terminal domain of the highly soluble spider silk protein, which showed efficient translation. 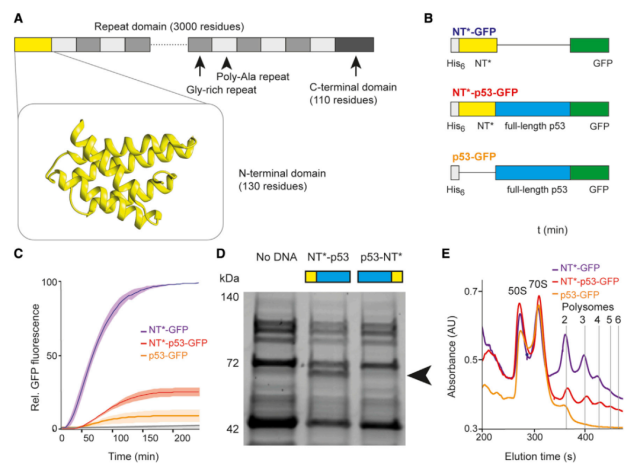 Using electron microscopy, computer simulations and mass spectrometry analysis, the research team confirmed that the fusion protein formed a compact stable conformation with the disordered transactivation domain of the p53 protein wrapped around the N-terminal domain of the spider silk protein. 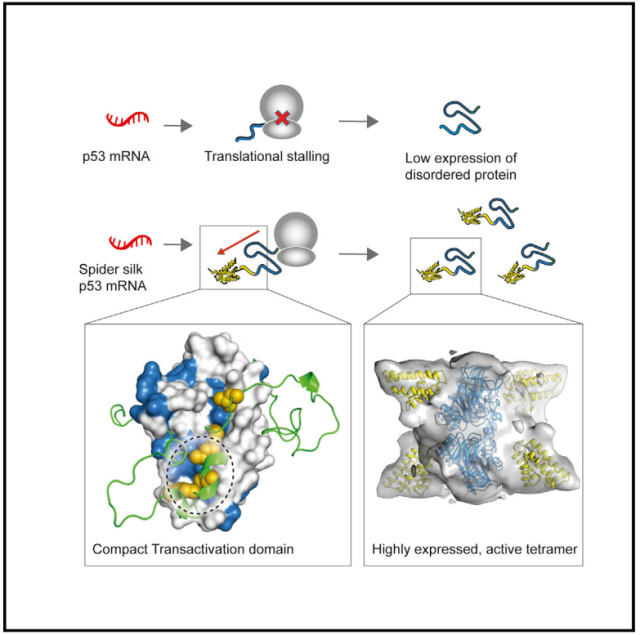 According to the research team, this study demonstrates that reducing N-terminal disorder can overcome the inefficient translation of p53, resulting in a protein that is conformationally stable and biologically active.

In this study, the fusion protein was expressed directly from synthetic mRNA.

The research team said that creating a more stable p53 mutant protein in cells is a promising cancer treatment, and hopes to eventually develop a mRNA-based cancer vaccines.

Of course, further verification of how this fused p53 protein will be processed in cells, as well as the issue of dose toxicity, is still needed.