A low-carb diet may make you lose weight for a short period of time, but it can also be costly…

When it comes to eating patterns, in addition to the “appalling” high-sugar, high-fat, high-calorie diet, more and more people are starting to reject carbohydrates. The reason is also very simple, because many articles are “exposing” the “guilt” of carbohydrate diets: excessive intake of “carbohydrates” will make people fat, and obesity is the cause of chronic diseases such as diabetes, cardiovascular disease, and cancer. The initiator of the disease.

In recent decades, there have been some studies that have indeed confirmed that low-carb diets have positive health effects, including helping participants lose weight in a short period of time, lowering triglycerides, and increasing HDL (good cholesterol) ; and Some studies emphasize the lack of long-term human trials, but this extreme dietary pattern is not suitable for long-term follow-up. Therefore, read carefully.

Nonetheless, low-carb, even very low-carb ketogenic diets have become increasingly popular in the weight-loss community and fitness crowd, with daily intakes of large amounts of lean meat (including only chicken breast, beef) and High-protein diets such as milkshakes replace regular diets. However, this practice may be costing you some terrible money.

Recently, researchers published a paper entitled: Low-carbohydrate diets and men’s cortisol and testosterone: Systematic review and meta-analysis in the journal Nutrition and Health .

The study found that a low-carb diet may have endocrine effects, which lowered testosterone levels in male participants, leading to erectile dysfunction and lower sperm counts .

In addition to this, cortisol stress hormone levels are also increased. This means that following a low-carb diet could put you at risk for infertility and other health conditions.

In the new study, the researchers analyzed the results of 27 clinical trials (12 randomized, 15 non-randomized) that met the criteria. The trials involved a total of 309 healthy male participants with an average age of 27 years, who were divided into a low-carbohydrate diet (low-carb group) and a high-carb diet (high-carb group) .

Both groups had a diet of ≤35% carbohydrates. Compared to the high-carb group, the low-carb group had higher levels of fat, protein, and cholesterol; and lower levels of fiber and sugar.

Ninety-five percent of participants engaged in physical activity during the dietary intervention, and cortisol level measurements were taken after aerobic exercise. Dietary interventions ranged from 2 days to 8 weeks.

The researchers found that a low-carb diet increased resting cortisol stress hormone levels in the short-term (<3 weeks) , and within 1 and 2 hours post-exercise, the cortex of the low-carb group compared with the high-carb group Alcohol levels are much higher.

High levels of cortisol are known to suppress the immune system, making a person more susceptible to colds, or infections from viruses and bacteria. 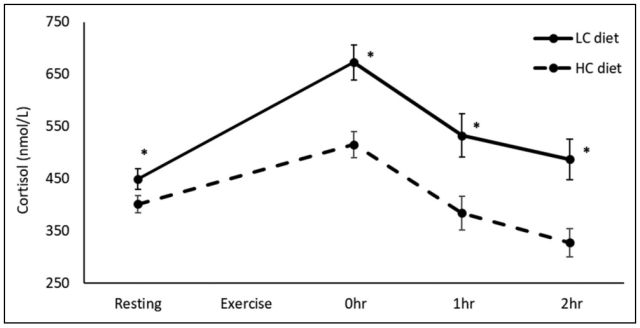 The researchers also found that participants in the low-carb group had significantly lower testosterone levels compared to the high-carb group.

This is a heavy loss. Know that low testosterone levels are not only associated with erectile dysfunction and lower sperm counts, which can reduce fertility; they are also linked to chronic diseases such as heart disease, diabetes, and Alzheimer’s.

The researchers found that participants in the high-protein group had 37 percent lower testosterone levels, which is medically known as hypogonadism.

Excessive intake of protein may also lead to protein poisoning, that is, the body converts too much protein into ammonia, and excessive intake of ammonia is neurotoxic and can lead to hyperammonemia in a short period of time, including dizziness, vomiting, diarrhea, Shortness of breath, severe cases may also lead to a deep coma. This condition is known as “rabbit starvation.”

“Rabbit starvation” does not mean literally, it does not mean that not eating meat will cause hunger like rabbits; on the contrary, this rare symptom of acute malnutrition is caused by “only eating meat”.

“Rabbit starvation” was first discovered by Arctic explorer Wilgarmer Stefanson among residents of northern Canada: local residents rarely eat other food except rabbit meat, and the result is that they are still hungry despite already bloated.

Also, during the Roman siege of Campo, Spain, soldiers were forced to feast on rabbits, causing many to suffer from severe diarrhea and death.

Therefore, the risk of only eating meat is not small.

In addition, there is probably not much advantage in the effect of low-carb diets for weight loss.

A recent review published in the Cochrane database of systematic reviews also found that long-term low-carbohydrate diets did not differ significantly from other diets in terms of weight loss. Also, there is no evidence that a low-carb diet has any additional health benefits .

In addition, scientists at the University of California, Riverside (UCR) are also studying how the keto diet works at the molecular level, and whether men and women can lose weight from it.

They found that the ketogenic diet appeared to be less effective in female mice because animals of different sexes metabolize fat differently and turn different genes on and off when fasting.

However, Frances Sladek, professor of cell biology at UCR, cautions: ” Whether the ketogenic diet is effective or not, don’t take any diet to extremes . It is unclear whether all fat is metabolized on a ketogenic diet or an intermittent fasting diet. Lost, or a lot of fat is still accumulated in the body. The standard Japanese diet contains 20% fat, the American diet averages 35%, and the ketogenic diet may contain 70% to 80% fat, which is an unsustainable eating pattern. “