Tissue damage first brings about an inflammatory response, but later on, tissue repair needs to be initiated. Tissue repair (regeneration) requires suppression of inflammatory immune responses, which is similar to the microenvironment of tumor immunosuppression . However, the relationship between the radiation damage-repair microenvironment and tumor metastasis remains unclear.

Previous research by Malanchi’s team showed that when breast cancer metastasizes to the lung, a kind of tissue regeneration occurs in the lung tissue [2]. Subsequently, Malanchi’s team analyzed the previous basic research and clinical research data, and found that in patients receiving radiotherapy, the phenomenon of tumor metastasis in the lung tissue on the same side of the breast cancer lesion is more common [3,4].

Therefore, Malanchi’s team wondered whether the accidental injury of healthy tissue by radiation therapy might contribute to the metastasis of tumor cells. If so, they also want to know what the molecular mechanism behind it is.

To answer this hypothesis, Malanchi’s team used acute lung injury caused by radiation (13 Gy) to the lungs , combined with a mouse model of transplanted tumor cells, to explore the relationship between healthy tissue damage and tumor metastasis.

In order to rule out individual differences, they precisely irradiated the right lung of mice to cause damage, and then implanted tumor cells into the tail vein. The experimental data showed that the number of tumors in the right lung lobe of mice was significantly higher than that in the unirradiated left lung lobe. 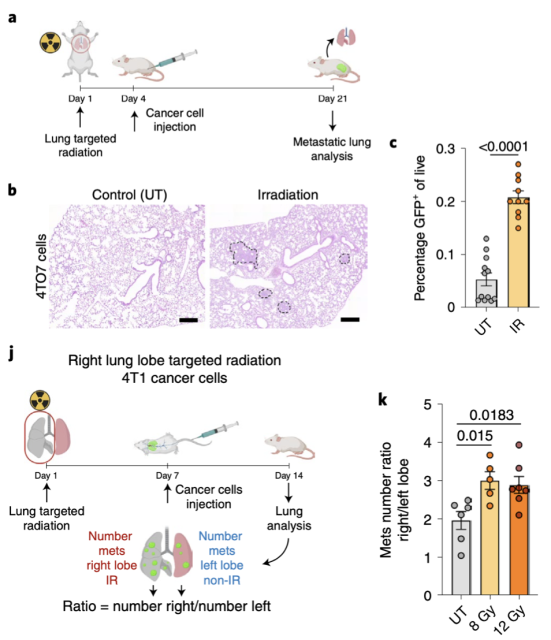 After radiation -induced acute lung injury in mice, Malanchi’s team also confirmed by staining tissue sections that radiation does indeed cause tissue damage, such as DNA breaks. In addition, they also found an unexpected finding: neutrophils entering the injured lung were significantly increased, and showed the morphology of inflammation-activated cells with multi-lobed nuclei and increased granule protein content.

To test whether infiltrating neutrophils are involved in promoting tumor cell metastasis to colonize damaged tissues, Malanchi’s team employed a positive and a negative strategy.

Let’s look at the first strategy first. From the day before the radiation until the end of the experiment, they gave the mice daily intraperitoneal injections of anti-Ly6G antibodies to deplete the neutrophils in the mice. After 7 days of radiation , they injected the mice with tumor cells through the tail vein.

Seven days after transplanting tumor cells, they found that depleting neutrophils effectively inhibited the growth of tumors that had metastasized to the lungs .

Based on the above research results, Malanchi’s team speculates that radiation damage to healthy lung tissue can pre-activate infiltrating neutrophils, thereby transforming the lung microenvironment to facilitate tumor cell metastasis and colonization .

To test this conjecture, Malanchi’s team designed a secondary transplantation experiment: first, the lungs of donor mice were subjected to radiation damage, and 7 days later, the neutrophils infiltrated in the lungs were isolated by enriching with anti-Ly6G magnetic beads.

These preactivated neutrophils were transferred into normal mice, and tumor cells were injected through the tail vein.

The results showed that the number of lung tumors in mice transplanted with preactivated neutrophils was significantly higher than that in the control group .

The results of this experiment suggest that this population of pre-activated neutrophils has the ability to reshape the lung microenvironment to favor tumor metastasis. 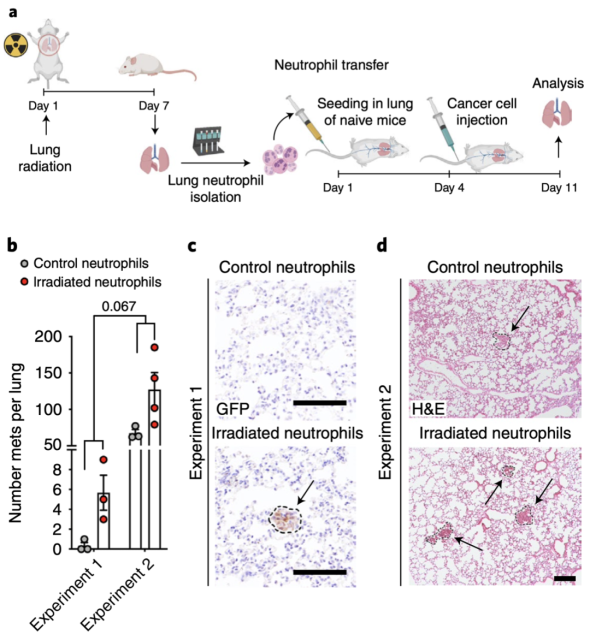 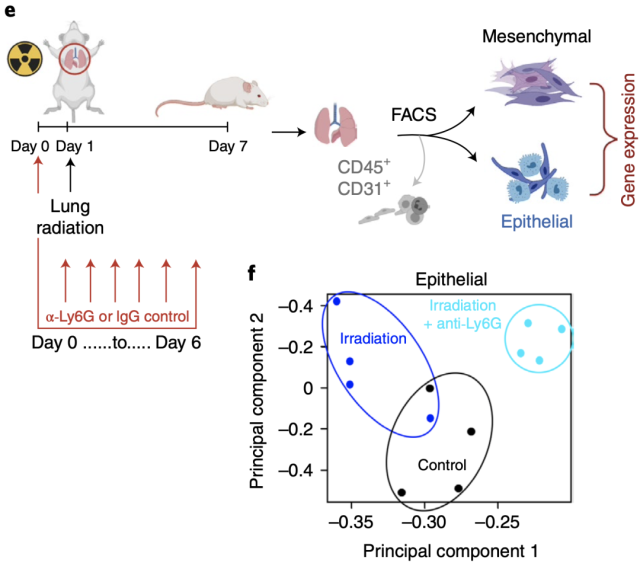 This mouse was then mated with spontaneous breast cancer mice (MMTV-PyMT) to obtain a mouse model capable of spontaneous orthotopic breast tumors and activation of the Notch signaling pathway in type II alveolar cells specifically induced by tamoxifen.

With the help of the above mouse model, they found that Notch-overactivated type II alveolar cells can indeed promote lung metastasis of breast cancer .

Given that the stem cell transcription factor Sox9 is a downstream target gene of Notch1 [5], Malanchi’s team wanted to know whether the stemness of tumor cells themselves is enhanced in a microenvironment where the Notch signaling pathway is overactivated.

They found that radiation did promote Notch signaling and stem cellization of metastatic tumor cells .

So, for the sake of the story, it must go back to the neutrophils, the protagonist of this study. How does this group of preactivated neutrophils affect lung epithelial cells?

Based on the previously discovered increase in intracellular granule proteins in neutrophils, the Malanchi team guessed that the release of these granule proteins may mediate the above process?

Therefore, they proposed to investigate whether the no longer release of granulin could affect tumor metastasis by inhibiting the degranulation process of neutrophils .

They found that the degranulation inhibitor Nexinhib20 did reverse the neutrophil-mediated pro-metastasis phenomenon in radiation -injured lungs . Going a step further, they also used a neutrophil elastase (Ela2) knockout mouse model, which had the same effect as the inhibitor Nexinhib20.

So, if inhibiting the over-activated Notch signaling pathway of lung epithelial cells can also reverse the effect of neutrophil-mediated tumor metastasis in the lungs damaged by radiation ? 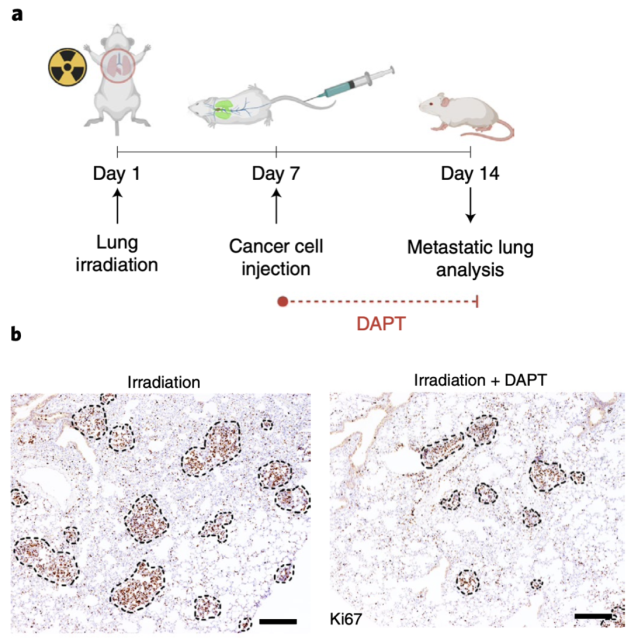 Blocking the conduction chain with the help of inhibitors Nexinhib20 and DAPT can effectively achieve reversal, which has certain clinical translation significance.

Overall, Malanchi’s team’s research shows that high levels of radiation have profound effects on the microenvironment of healthy lung tissue, an effect that increases the potential for cancer to metastasize to the lungs.

It should be noted that in Malanchi’s experiments, the volume of healthy tissue exposed to radiation was much larger than that of clinical radiotherapy.

The exosomes produced by neutrophils may affect the microenvironment in other regions and facilitate the metastasis of cancer cells.

Therefore, based on this study, it is necessary to pay attention to the effect of radiotherapy on neutrophils in patients.

Finally, we would like to discuss the limitations of the experimental design of this study.

Clinically, patients have coexisted with the tumor for a long time when there is both a primary tumor and a lung metastases.

At this time, the accidental injury of healthy tissue by radiotherapy promotes tumor metastasis, and it is difficult to distinguish whether the existing tumor in the body is more suitable for the microenvironment of lung injury directly (because the immune cells in it are also indiscriminately damaged) , or Injury brings inflammation (neutrophil activation) and post-injury repair affects the microenvironment, and even the body’s stress response brought about by radiation therapy, or a few of them exist.

Therefore, the research team also emphasized in the Discussion section that this acute injury-transplantation model has certain limitations.

In addition, removing neutrophils (or inhibiting the process of degranulation) is very harmful to the immune and epidemic prevention undertaken by neutrophils, because the human body not only faces tumors, but also the invasion of bacteria, fungi, mycoplasma and other microorganisms.

If the Notch signaling pathway is inhibited, the number of tumors may be less, and the repair of self-damage will be significantly delayed.

The consequences of chronic persistent inflammation are difficult to predict, such as pulmonary fibrosis, which will lead to decreased lung function. These shortcomings will also greatly limit clinical translation applications.

These interesting issues deserve further discussion and research. Cancer is known as a “wound that never heals”, so does chronic “injury” like this continue to remodel the normal tissue microenvironment? Are other tissue resident macrophages involved besides neutrophils?