Why could CAR-T provide the sustainable clinical response against cancers?

Why could CAR-T provide the sustainable clinical response against cancers? It is well known that CAR-T cell therapy is effective in treating tumors.

In the treatment of acute (ALL) and chronic lymphocytic leukemia (CLL), the sustainability of CAR-T is a major feature of long-term effective clinical response, however, few studies have reported the characteristics of long-acting CAR-T.

Recently, a research team led by the labs of J. Joseph Melenhorst, Kai Tan and Carl H. June at the University of Pennsylvania has deciphered the characteristics of high-efficiency anti-cancer CAR-T cells by long-term follow-up study of CAR-T cells in two patients . The exciting research results were published in the journal Nature [1]. 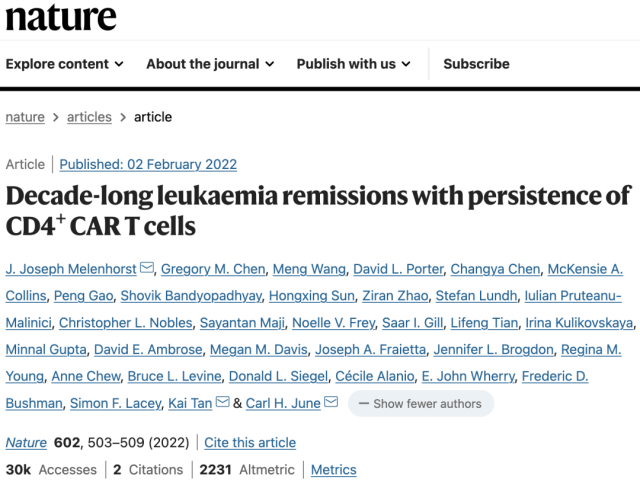 Things have to start 12 years ago.

In 2010, CAR-T cell therapy targeting CD19 (CTL019) launched its first phase clinical trial and was used for the first time in the treatment of CLL. After the first two patients participated in the treatment, after more than ten years of treatment, the disease had sustained complete remission, and CAR-T cells could be continuously detected .

Looking back now, CTL019 expansion in patient 1 peaked on day 3, and patient 2 peaked on day 31. This delay may be due to the 78-fold lower reinfusion dose. However, the effect of this difference was not significant, and both patients remained in complete remission for more than ten years after the reinfusion .

In the latest blood test (ten years after patient No. 1 was reinfused, and nine years after patient No. 2 was reinfused) , CTL019 cells could still be detected in two patients, accounting for 0.8% and 0.1% of the total T cells, respectively. % . Using quantitative PCR, the researchers confirmed that CTL019 was consistently present in all blood samples collected after reinfusion in both patients.

Flow cytometry showed that CD19 + B lymphocytes and CLL cells were either undetectable or suppressed to very low levels (less than 1% of cells) three years after CTL019 infusion . 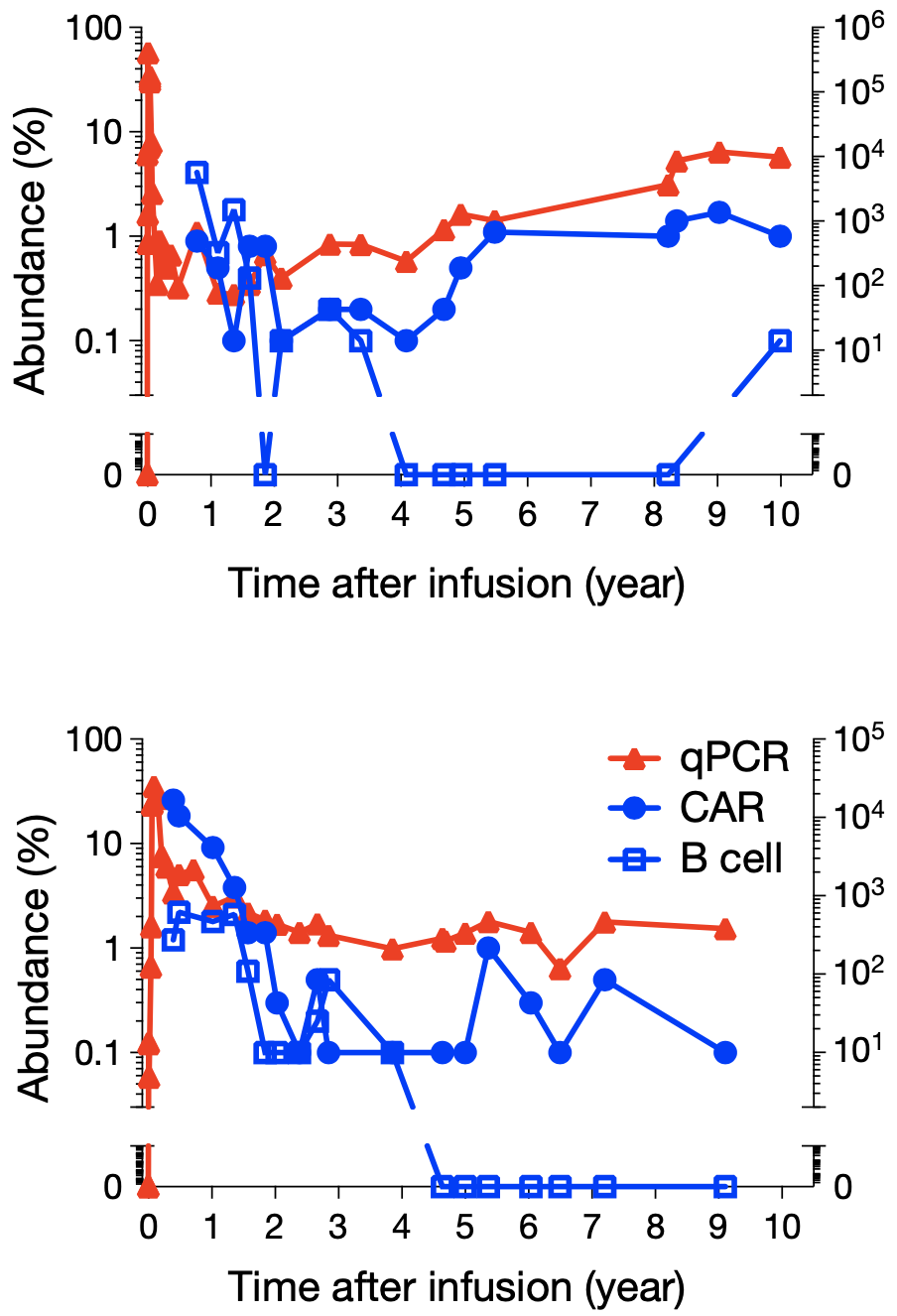 ▲ Legend: Patient No. 1 (top) and Patient No. 2 (bottom) responded to CAR-T therapy targeting CD19. Red triangles show CAR-T cell expansion and sustainability detected by qPCR, blue dots are flow cytometry staining with anti-CAR antibodies, and blue squares are CAR-T cells detected by CD19 antibody Number of B cells after cell therapy. Overall, CLL and B cells have been continuously suppressed for a decade, with minimal numbers; CAR-T cells have always existed.

So what exactly are these CAR-T cells that stay in the patient’s body for up to 10 years?

In order to understand the clonal characteristics of these CAR-T cells, the researchers took sorted CAR-T cells as the research object, and used deep sequencing to detect the TCR b-chain repertoire (TCR-seq), as well as lentiviral vectors in CAR-T cells. – Integration site (LVIS) in T cells.

In the CAR-T cell genomes of patient No. 1 (0-9 years) and patient No. 2 (0-7.2 years), the researchers found 7930 and 3406 unique CAR vector integration sites respectively; In the initially prepared CAR-T cells, there were 3378 and 1216 integration sites, respectively, as baselines . Regardless of the initial CAR-T or later time points, most of the inserts were integrated into a gene, and the probability of integration into introns was higher than that of other genetic elements. 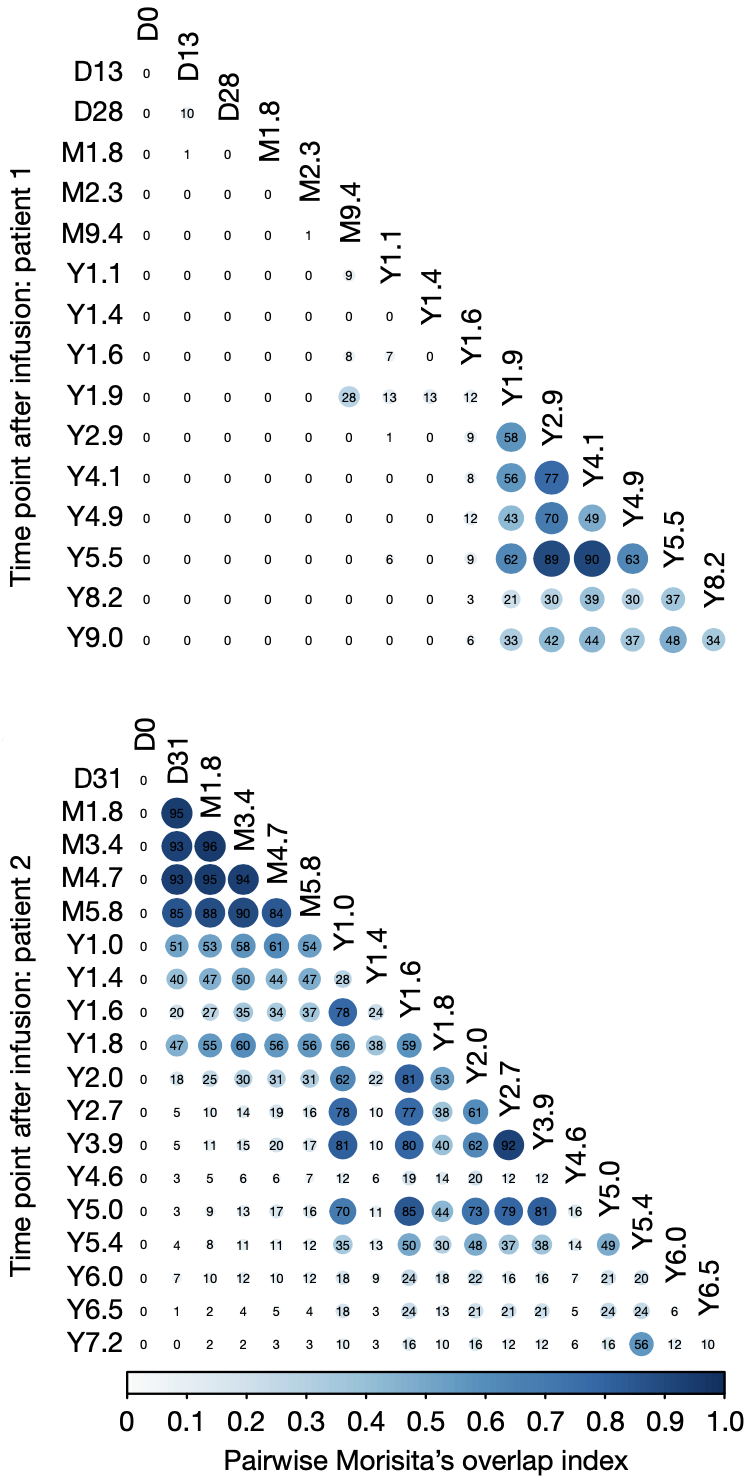 ▲ Legend: The viral vector of the CAR integrates into different sites in the cell, and the clone evolves over time. Morisita’s coincidence index compares the similarity of CAR-T clonal composition between patients at different time points after reinfusion. The larger the value, the higher the similarity, and the more stable the clonal composition is in the corresponding time span. Top: Patient No. 1; Bottom: Patient No. 2.

At the stage of 9.4 months to 1.9 years in patient No. 1, clones with CAR vector integrated into MTOR, BCAP31, ZNF598 and NPRL3 alleles appeared. Clones with CAR integration sites located in or near genes such as FOXP1, ZNF44 and RHOD appeared between 1.6-1.9 years and remained stable for many years thereafter. LSM4 and CSNK2A are CAR integration sites that appeared at 8.2-9.0 years.

Patient No. 2 developed some CAR-T cell clones accounting for more than 10% very early after the reinfusion, such as SRCAP, PATL1 and KCTD3 integration site clones, which were most prominent in the first two years; ZZEF1 continued to exceed 10%. 7 years.

These data show that the stability of the CAR-T cell population in the later stage of reinfusion in patient No. 1, and the staged clonal stability of patient No. 2, and the integration sites of the two do not overlap .

▲ Legend: Different integration sites over time (>10% at least at one point in time) in patients 1 (left) and 2 (right).

Next, everyone must want to know, what is the phenotype of such effective CAR-T cells at various time points in patients? What are the characteristics of each?

To answer this question, the researchers used mass cytometry (CyTOF) to detect the phenotype of CAR-T cells at various time points with 40 antibodies. The experiment selected CD3 + CAR + T cells for analysis, and each time point included at least 100 representative cells.

Although there was a certain delay in the expansion of CAR-T cells in patient No. 2, it also showed a similar trend: CD8 + accounted for a large proportion at the beginning, and over time, CD4 + came later, occupying the 7.2nd year. 97.6% CAR-T composition.

These CD4 – CD8 – CAR-T cells have a special phenotype: although double negative, they express cytotoxic markers such as GZMB, 2B4, CD57, CD85j, T-bet, PD-1 and Helios . Among them, the expression of Helios is a marker for distinguishing CD8 + T cells, so this group of cells is called CD4 – CD8 – Helios hi CAR-T cells. 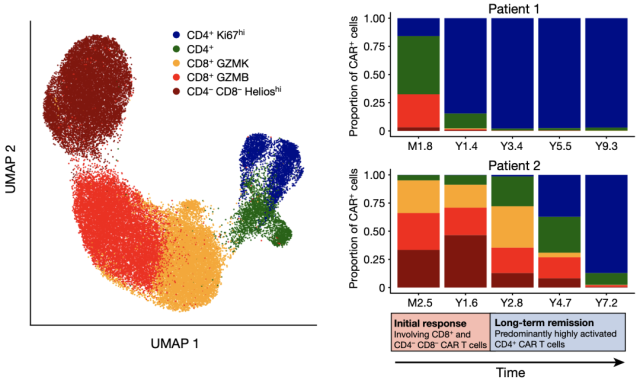 After talking about the very special gd CAR-T cells, let’s talk about the CD4 + CAR-T cells that have long been ranked first in absolute numbers .

▲ Legend: Among the five CAR-T cell groups, CyTOF detected the marker expression levels of each group.

How can these Ki67 hi CD4 + CAR-T cells, which have been working for ten years, achieve ultra-long standby time and are so effective?

The researchers next analyzed the clonal composition, protein expression and transcriptome of this particular group of CAR-T cells at the single-cell level. They started by reinfusing a 9.3-year sample from Patient 1—the longest follow-up time point for which there were enough cells to analyze.

The researchers used the sorted CD3 + CAR + DAPI – cells to construct a single-cell TCR-seq and CITE-seq library, and obtained the single-cell characteristics of 1437 T cells through stringent screening conditions. Among them, 1149 are CAR-T cells, and 288 are ordinary T cells that do not express CAR, which are just used for comparison with CAR-T cells.

Thirteen of the 27 clones were detected in TCR-seq analysis of samples from the previous two years. In terms of CD4/CD8 ratio, the composition of ordinary T cells is a mixed population of CD4 + and CD8 + in similar proportions , while CD4 + CAR-T cells dominated at the time point of 9.3 years, and CD8 + CAR -T cells dominated. T is almost undetectable.

At the transcriptional level, CAR-T cells exhibited distinct proliferative characteristics, which were also supported by the expression of other genes (such as PCNA, MCM6, TOP2A, CDK1, CCDNB2, and MKI67) and cell cycle scores.

The researchers also found that about 30 percent of CAR-T cells were in the S, G2, or M phases, compared with less than 7 percent of non-CAR-T cells . Cell cycle characteristics were independent of the CAR-T clonal type; there was also no significant difference in cell cycle status between the top three clonotypes. 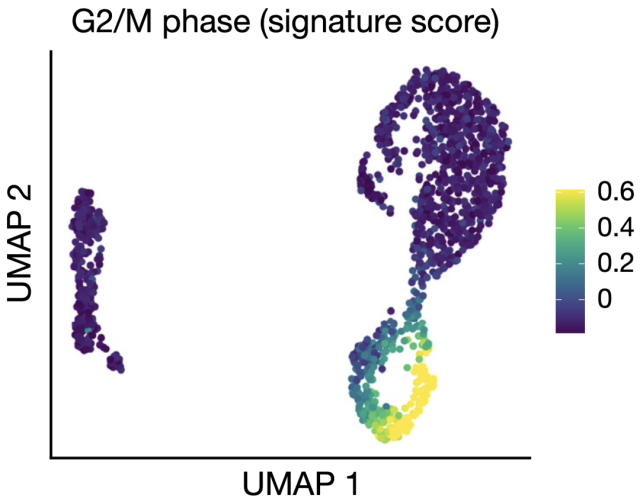 In addition, the 9.3-year-old CAR-T cells also showed their unique properties compared with non-CAR-T cells. CITE-seq showed that the activation markers CD38 and HLA-DR were highly up-regulated in CAR-T cells, while inhibitory receptors such as PD-1, TIM-3, LAG-3, TIGIT were also up-regulated – they may not only be It is related to exhaustion and also to T cell activation state.

Notably, upregulation of cytotoxicity-related enzyme proteins, such as GZMK and GZMA encoding granzymes, was detected in CD4 + CAR-T cells . PRF1, which encodes perforin, was also up-regulated, and it may cooperate with the up-regulated vesicle cell component pathway to regulate cytotoxic granules. 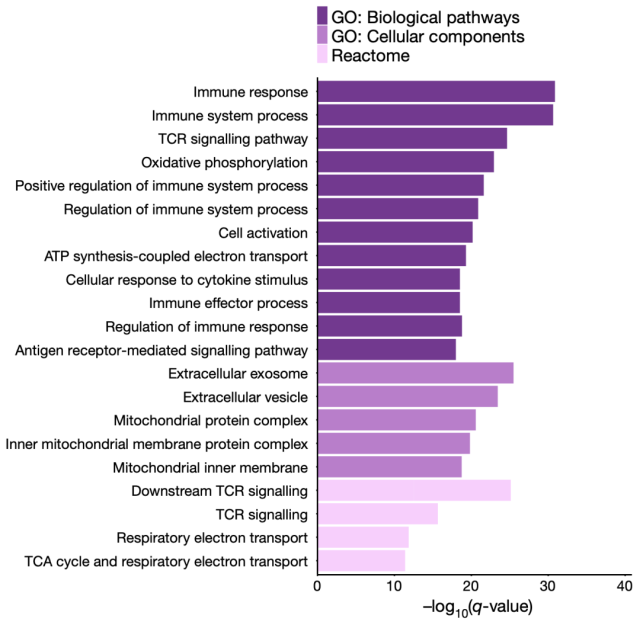 To directly measure the functional activity of these long-acting CD4 + CAR-T cells, the researchers specifically stimulated CAR-T cells by co-culture with K562 cells expressing CD19 antigen with T cells from patient No. 1 reinfused for 9.3 years. Under the antigen stimulation of CAR, the degranulation marker CD107a was up-regulated, and the genes expressed at the same time were MIP-1b, perforin and granzyme A, indicating that these CD4 + -based CAR-T cells have direct cellular Toxic function .

The above results suggest that these CAR-T cells functionally exhibit activation properties rather than exhaustion. Consistent with this, the expression of genes encoding cytokines IL-10 and IL-32 was also up-regulated in CAR-T cells. GAPDH is up-regulated in CAR-T cells at all cell cycle stages, whereas LDHA and oxidative phosphorylation pathways are up-regulated only in cells in active cell cycle, suggesting aerobic glycolysis and mitochondria-dependent oxidative phosphorylation , can provide energy metabolism support for CAR-T cell proliferation .

The previous study was a sample of patient No. 1 at 9.3 years. Do these long-acting CD4 + CAR-T cells expressing GZMA and GZMK also exist in the first patient and the second patient?

By examining the samples of patient No. 2 at 6.5 years, CITE-seq analysis found 153 high-quality CAR-T cells, which had a very similar CD4 + CAR-T cell population as patient No. 1 at 9.3 years.

This characteristic expression of GZMA-GZMK also appeared in the early samples 12 and 15 months after the reinfusion of patient No. 1, and GZMA and GZMK were expressed in almost all detected CAR-T cells. Many CAR-T cells at early time points were CD4 + , and some cells with similar transcriptional characteristics were CD8 + , implying that CD4 + and CD8 + CAR-T cells shared cytotoxic function at these time points .

Overall, these two patients had ultra-long standby CD19-targeting CAR-T cells, which were still detectable after more than ten years of reinfusion, and both maintained their efficacy.

From the research results, the in vivo response of CAR-T is divided into two different stages: the initial stage is mainly CD8 + or CD4 – CD8 – Helio hi gd CAR-T cells; in the following years, the continuously proliferating CD4 + CAR-T cells dominate .

The trend of stability of CAR-T cell clones also reflects that CAR-T is actually composed of a few clones. Single-cell sequencing revealed that these long-term CD4 + CAR-T cells were cytotoxic .

These studies have enriched the understanding of the long-term efficacy of CAR-T cells in the treatment of leukemia, and these findings will bring new ideas for future long-term effective CAR-T research.

“We can now conclude that CAR-T cells can cure leukemia,” Dr. Carl June said in a news release.[3]

Why could CAR-T provide the sustainable clinical response against cancers?