Alzheimer’s disease (AD), commonly known as Alzheimer’s disease, is a global health problem with a high economic and social burden. There are about 50 million dementia cases in the world, and about 10 million new cases are added every year.

Lifestyle has a large impact on cognitive function, naps are considered an integral part of a healthy lifestyle, and the incidence of naps in older adults is much higher than in younger adults. Early research suggests that the development of Alzheimer’s disease can be reduced by modifying risk factors such as physical inactivity, high blood pressure, obesity and diabetes.

Early research has established that disturbed nighttime sleep is highly associated with cognitive decline and an increased risk of dementia. In recent years, people have paid more and more attention to napping, but whether napping is beneficial to the cognitive function of the elderly and whether it is a risk factor for cognitive impairment in the elderly is still controversial.

On March 17, 2022, researchers from the University of California, San Francisco published a research paper entitled: Daytime napping and Alzheimer’s dementia: A potential bidirectional relationship in the journal Alzheimer’s & Dementia .

The study showed a two-way relationship between napping and brain aging. Specifically, excessive daytime naps were associated with an increased risk of dementia later in life. Meanwhile, having Alzheimer’s can lead to increased daytime naps as patients age.

For the study, researchers analyzed data from an ongoing study, the Rush Memory and Aging Project (MAP) , which included a total of 1,401 adults with an average age of 81, all participating in the 2-week study period. Participants wear a watch-like device on their wrist to measure sleep events. The researchers then calculated the duration and frequency of each person’s naps throughout the experiment.

The study found that nap time and nap frequency were positively associated with age, and found a bidirectional relationship between daytime sleep and dementia .

After exclusion of dementia risk factors, longer and more frequent daytime naps were found to be risk factors for Alzheimer’s in cognitively normal individuals. Also, as Alzheimer’s disease progresses, nap time and frequency increase with age, especially in older adults who already show symptoms of dementia.

Ultimately, the researchers describe the relationship between daytime naps and cognition as a “vicious cycle . “ 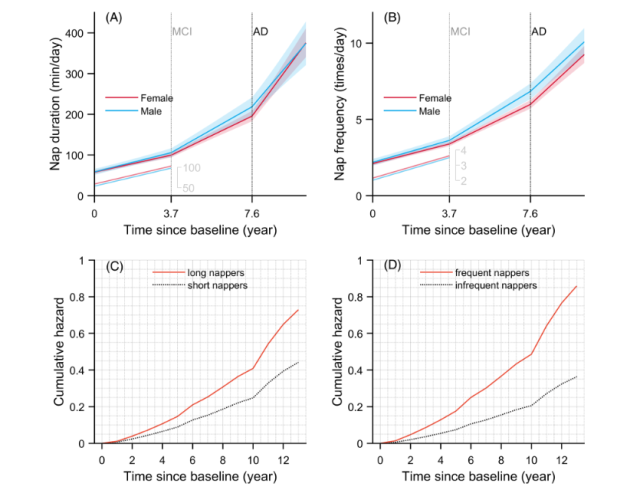 The link between naps and dementia

The researchers also point to limitations.

First, while actigraphy is widely used and validated in sleep research, polysomnography is the gold standard for sleep scoring.

Second, the study participants were older, and the findings may not be easily translatable to cohorts of young adults. Third, future research should test whether direct intervention in daytime naps can reduce dementia-related risk.

Even though sleep is an absolute necessity for human health, the benefits of daytime naps are less pronounced.

Ultimately, the researchers want to focus more on daytime sleep patterns and whether patients need to pay attention to whether sleep duration changes over time, as sleep changes play a role in shaping internal brain changes associated with biological clocks, cognitive decline, and dementia risk. important.