FDA: Bacteria are all over the production line of Abbott milk powder

FDA: Bacteria are all over the production line of Abbott milk powder.

It has been a month since the recall of Abbott milk powder, but everyone thought it was just an ordinary quality problem. I don’t know, but there are huge problems hidden behind this recall!

On March 23, the FDA released a 10-page report , each page full of the plant being overrun by a deadly bacterium called Cronobacter sakazakii .

According to the report, the bacteria are all over the milk powder production line, even on the spoons that come with each bucket!

Even more terrifying is that the number of infant deaths and illnesses is still increasing, and two infants are known to have died from bacterial infections.

Two families, because of the irresponsibility of the factory, fell into a lifetime of grief that cannot be resolved.

Every page of the report touches the hearts of countless mothers.

It records every corner of the workshop that produces milk powder: 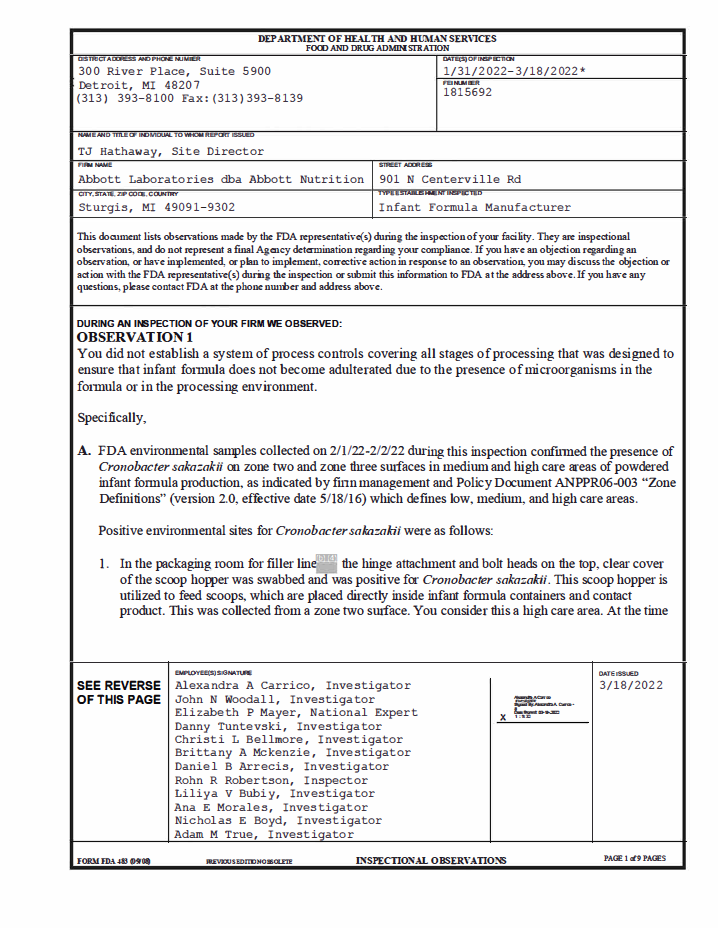 For the full version, see: https://www.fda.gov/media/157073/download?utm_medium=email&utm_source=govdelivery

“FDA samples from cellphones from February 1-2, 2022 confirmed the presence of Cronobacter sakazakii on surfaces in intermediate and high care areas where infant formula is produced .

In the packing room of the bottling line, the feeding spoon that came with the baby formula showed positive for bacteria . “

And just when the FDA was sampling, there were still a lot of milk powder being packaged!

The FDA then went into the east room and found Cronobacter sakazakii on the floor in one area , one might think finding the bacteria on the floor is not a big deal.

However, the FDA found that none of these workers on the baby formula assembly line were wearing the necessary protective clothing! I never change my shoes when entering and leaving the production area.

That is to say, no matter where the bacteria are, they may contaminate the milk powder during production.

More and more later, the FDA said that between February 6 and February 20, 2022, they found 20 locations with Cronobacter sakazakii contamination on the production line.

Even more frightening is that some bacteria have existed since the fall of 2019!

Cronobacter sakazaki is a common bacterium for adults, but for infants, once the consequences of infection are unimaginable, the fatality rate is as high as 40%-80%! 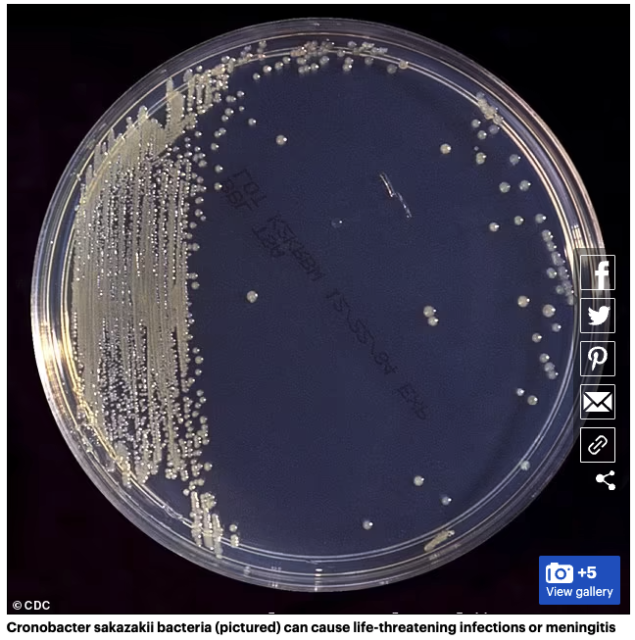 The first symptoms of infants under 1 year of age are fever, accompanied by poor feeding, excessive crying, and lack of energy.

The bacteria can also cause intestinal damage, spread to other parts of the body, and enter the brain and spinal cord!

Babies can’t express their feelings except crying. Many new parents can’t tell what the baby’s crying is uncomfortable, and the progress of the disease can easily be misdiagnosed.

The FDA report also said that 2 babies who died in Ohio hospitals and 5 babies who were hospitalized were linked to this milk powder infection!

In February, at least six parents sued Abbott in U.S. District Courts in Illinois and Florida .

Because of Abbott’s milk powder, their children have been locked away in hell.

Two Miami parents say they must make Abbott pay for their irresponsible practices after their kids got sick after drinking Abbott milk powder !

There are many parents like them who have gone through unbearable days.

On February 21, 2-month-old baby Jones was sent to the hospital by his parents because of excessive crying and severe dehydration. He was covered with rashes.

The doctor said: “His body temperature was as high as 40 degrees , he was crying and moaning non-stop, and his whole body was red, as red as chili peppers.”

Now they know that the poor baby, who is only 2 months old, is just one of the victims of Abbott milk powder!

In the event of a problem with Abbott’s milk powder, there could be a persistent shortage of infant formula.

It is reported that Abbott has issued a statement saying: “We take this matter very seriously and are currently working with the FDA to implement corrective measures. We deeply regret the concern and inconvenience caused to parents and caregivers, as well as medical professionals.”

Abbott also said that the genetic makeup of the bacteria found in the Michigan plant was different from that of the Cronobacter sakazakii infection from the dead infant.

Finally, the World Health Organization pointed out in the “Safe preparation, storage and handling of powdered infant formula : guidelines” issued in 2007 that: when brewing milk powder, using water not lower than 70 °C to prepare infant formula can significantly reduce the risk of bacterial infection. Dangerous, and then add cold water to room temperature.

FDA: Bacteria are all over the production line of Abbott milk powder