In December 2020, the mRNA COVID-19 vaccine ( BNT162b2 ) developed by Pfizer /BioNTech received emergency use authorization from the US FDA , becoming the first approved mRNA vaccine in history.

In Phase III clinical trials, the mRNA vaccine showed up to 95% protection against the novel coronavirus pneumonia ( COVID-19) caused by SARS-CoV-2 infection . However, despite the widespread use of BNT162b2, the mechanism by which it stimulates protective immunity remains largely unknown.

On March 14, 2022, the team of Professor Bali Pulendran , Department of Microbiology and Immunology, Stanford University School of Medicine, USA, published a research paper titled: Mechanisms of innate and adaptive immunity to the Pfizer-BioNTechBNT162b2 vaccine online in the journal Nature Immunology .

The research team analyzed the innate and adaptive immune responses after vaccination with BNT162b2 in mice and found that the immunization stimulated potent antibody and antigen-specific T cell responses and significantly enhanced the innate immune response after secondary immunization , mRNA Vaccine-mediated protection against SARS-CoV-2 infection is mainly mediated by humoral immunity, whereas cellular immunity is effective in clearing the infection. These findings provide new insights into the immune responses induced by mRNA vaccines in vivo, which can be used to guide and improve future vaccine designs.

To evaluate the immune response to BNT162b2, the researchers immunized mice with the BNT162b2 vaccine intramuscularly. Anti-spike-binding IgG responses were significantly increased, while secondary immunizations increased responses more than tenfold. 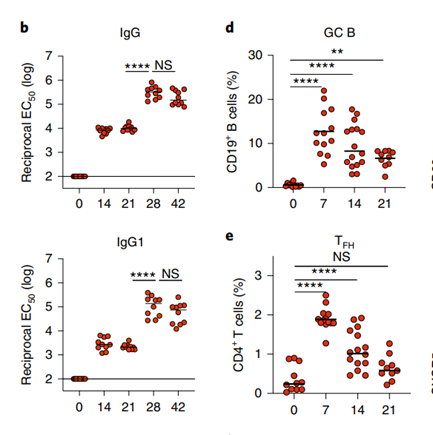 Next, the researchers analyzed serum cytokine responses. BNT162b2 immunization induced the release of many cytokines, including MCP1, MIP1b, IL-6 and CXCL10, as well as interferon-γ. These data demonstrate that the BNT162b2 vaccine induces a strong T cell response. 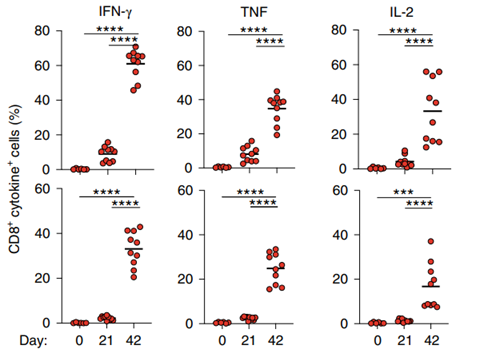 Uptake of mRNA by lymph node dendritic cells and macrophages

Many properties of LNP-mRNA vaccines, including LNP size, pKa of ionizable lipids, and lipid gradients, affect the tissue and cell specificity of mRNA vaccines . 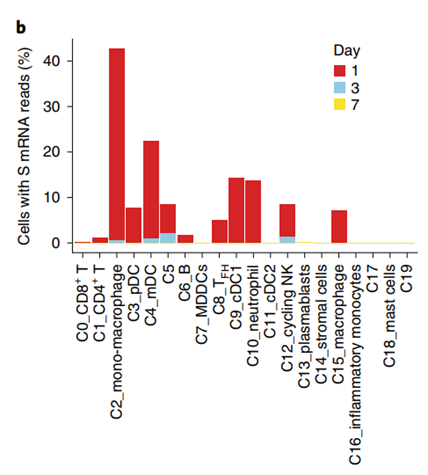 TLRs are the most studied sensors of pathogen-associated molecular patterns. TLR3 and TLR7 recognize double-stranded and single-stranded RNA, respectively. Therefore, the researchers first tested whether the loss of these receptors results in a diminished immune response to BNT162b2.

However, immunization of TLR3-deficient or TLR7-deficient mice did not result in a reduction in antibody or T-cell responses, suggesting that they are not the primary sensors of BNT162b2 in vivo.

The RIG-I-like receptor family of proteins senses cytoplasmic RNA and is a second family sensor of BNT162b2.

To assess whether RIG-I-like receptors are involved in mRNA recognition, the researchers immunized MDA5-deficient mice.

This suggests that MDA5 induction by BNT162b2 is critical for the induction of specific CD8+ T cell responses. In addition, the frequency of IFN-γ-secreting spike-specific T cells was significantly but incompletely downregulated.

Analysis of knockout mice showed that induction of antibody and T-cell responses to BNT162b2 was independent of Toll-like receptor signaling, inflammasome activation, or necrosis or pyroptosis cell death pathway.

In contrast, BNT162b2-induced CD8+ T cell responses were dependent on type I interferon-dependent MDA5 signaling. These results provide new insights into the molecular mechanisms by which the BNT162b2 vaccine stimulates immune responses .