The Faculty of Medicine of the University of Hong Kong held a press conference on the update of the simulation model for the development of the fifth wave of the Omicron epidemic on the 22nd.

This release is the ninth edition of the model:

According to the latest estimates released by the Faculty of Medicine of the University of Hong Kong, it is estimated that about 4.4 million people in Hong Kong have been infected with the COVID-19 virus (the total population of Hong Kong is about 7.4 million), and most of them are recovering or have recovered.

Leung Cheuk-wai, dean of the Faculty of Medicine of the University of Hong Kong, who is also an expert adviser to the government, said that all scientific evidence shows that the peak of the fifth wave of the epidemic has passed.

If there are no uncertain factors such as new variants of the virus returning to Hong Kong, it is estimated that by the end of April, the number of single-day infections will drop to three digits.

He believes that the sixth wave of the epidemic will definitely come, and he believes that it will eventually turn into a “terroir disease”. It will be safer if we can prepare in advance.

The sixth wave of the epidemic will definitely come

Liang Zhuowei said that if 80% of people can get oral drugs for the COVID-19, the number of deaths in the fifth wave of the epidemic will be around 8,400 by the end of April.

The Faculty of Medicine of the University of Hong Kong also estimated that if the COVID-19 epidemic is handled in the way of endemic diseases, assuming that social distancing measures are fully relaxed on June 1, it is estimated that the sixth wave of the epidemic will come soon, and the epidemic is expected to last for about two months, with a total of 2.2 million people infected. , 500 people are admitted to hospital every day, and about 1,500 people die.

At that time, public hospitals will be able to cope with the number of admissions without exceeding the capacity , and even if the flight operations are opened, there will be a maximum of 1,000 imported cases per day , which will not have a negative impact on the sixth wave of the epidemic.

Liang Zhuowei believes that the government needs to decide the next step in the anti-epidemic direction as soon as possible. If the government decides to continue “dynamic clearing”, it must prepare for national nucleic acid testing.

However, when 60% of the population in Hong Kong has been infected and recovered, it will be difficult to identify the 1,000 invisible patients who are still infectious. Another route is to continue the current “three reductions” strategy of reducing severe illness, reducing death and reducing hospital load, so that the number of hospital admissions does not exceed the capacity of the HA, and no longer strives to find the last infected person.

He emphasized that the two paths proposed are to hope that the society will choose as soon as possible and not repeat the painful lesson of passively facing the epidemic, instead of choosing on behalf of the society, and it is difficult for him to consider factors such as politics, economy and people’s livelihood.

He pointed out that if you choose to “clear” , you need to adhere to border defense measures, which must be stricter than the measures in early January, including the “tightness” of quarantine hotels, etc.; and when the number of confirmed diagnoses reaches a low three-digit level, there must be a national nucleic acid The tests should be coordinated, but not necessarily only three times.

Another option is “towards endemic diseases” , Liang Zhuowei said, under this strategy, including reducing severe disease, reducing death, reducing medical burden as the goal. He believes that currently about 60% of people have been passively infected, which is not ideal.

As for what went wrong, it is up to other sectors to comment ; the remaining about 40% of the uninfected citizens, if the authorities can increase the purchase of COVID-19 drugs in the next month In addition, the vaccination rate will be increased, and citizens will have more experience in dealing with confirmed diagnoses, and may be able to develop “natural immunity” under controllable circumstances.

But he said there are a number of unknowns that need to be considered, including the fatality rate of the new variant of the virus, if the strategy is to be pursued.

It is worth noting that the model uses vaccine effectiveness data derived from the actual situation in Hong Kong , showing that China’s inactivated vaccine Sinovac is effective in preventing severe illness and preventing death. 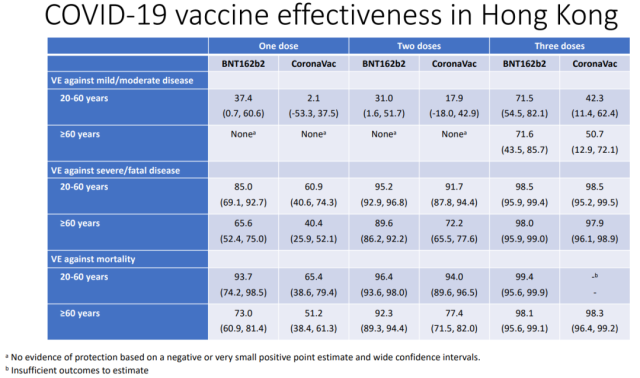 The CoronaVac in the table is the Sinovac vaccine, and BNT162b2 is the mRNA vaccine mRNA BNT produced by Fosun and BioNTech .

After the third dose of vaccination, the protection has been comprehensively improved:

The effectiveness of the three doses:

In some of these groups, due to insufficient cases, the current confidence interval is relatively wide, and we can get more accurate answers over time.